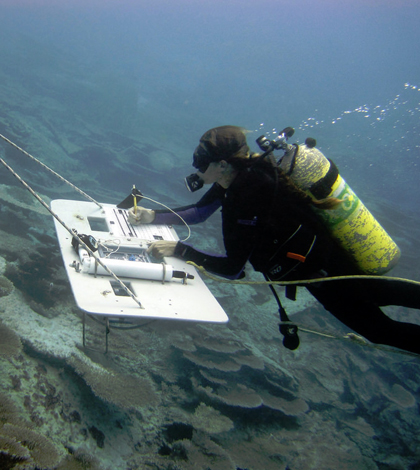 You can spend just about as much as you want on the latest environmental sensing system. Or if you’ve got an inventive streak like a group of divers with the National Oceanic and Atmospheric Administration (NOAA), you could just make your own.

The work that the team does is fascinating, as they get to dive through waters around remote Pacific islands surveying anything from small reef fish to sharks, coral bleaching, algae outbreaks and more. Through the years, since about 2000, the group that dives under the Coral Reef Ecosystem Program has spotted marine debris, derelict fishing gear and even shipwrecks, all while relying on simple equipment that they’ve largely devised themselves.

“Oftentimes people say that we fly the boards underwater,” said Kevin Lino, marine ecosystem research coordinator with the Pacific Islands Fisheries Science Center at NOAA’s Inouye Regional Center, describing boards that the divers use to carry out marine surveys around Hawaii and other regions of the U.S.-affiliated Central and Western Pacific Ocean.

The boards represent just one piece of equipment used during the dives, which are carried out with two divers. One does a benthic (corals) survey, while the other keeps tabs on fish in the area. Boards attach to tow lines that pull the holders through the water at a speed up to 2 knots, but also double as underwater tables. Attached to each board is a slice of PVC so thin that it’s possible to write on. The PVC sheets have different sections printed onto them to mark space for certain information. That could be on habitat, the extent of algae, fish in an area or other things. But how divers write on the sheets is pretty neat in itself, if just for its sheer simplicity. We asked for the secret, expecting talk of waterproof paper or hydrophobic ink.

The divers also carry a few other, more sophisticated, items on their boards. Each is equipped with a Seabird 39 that records temperature and pressure, while the board used for benthic surveys also carries an underwater camera that takes images during tows. The surveys are broken down into five-minute segments and the shots that it collects are analyzed later.

In addition, the crew also swims with stopwatches set to alarm every five minutes to alert divers to check in with their dive buddies and support vessel. A sound-signal device on a battery-powered cable along the towline also allows those towing underwater to communicate via morse code with crew members piloting the ship. To send messages to the divers, boat drivers rev the engine. A GPS unit aboard the boat is used to georeference findings. Lino says that his group has looked into purchasing an acoustic system to replace the manual means of communicating through morse code, but that its cost hit around $40,000, which was prohibitive.

“Versus our simple wire system, sometimes simplicity is the best means,” said Lino.

All of the underwater tools help Lino and other members of the dive team gather valuable data on coral reef ecosystems in the Central and Western Pacific. They mostly serve as independent data-gatherers, acquiring the information on reef fish and corals needed for policymakers and others to make the best management decisions.

In looking at changes in fish communities, he says that his crew has found populations in some areas are stable whereas those in other regions are decreasing. The investigators are still sifting through the benthic data they’ve collected, as analyzing images adds some time to the turnaround.

The information gathered by NOAA divers has been gleaned from all over the Hawaiian Islands, American Samoa, the Pacific Remote Island Areas, the Mariana Islands and Guam, some of which is difficult to obtain by other means. But the crew’s small footprint often makes it possible for surveying in hard-to-reach areas, like windward coastlines.

“Our goal is to look at the broad-scale changes, on the island scale or archipelago scale as well,” said Lino. “… We try to be as scientifically accurate as possible, collect the data and allow local managers and stakeholders to make the decisions.”