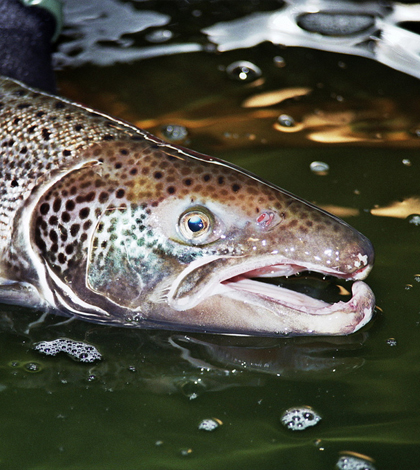 Work there is year-round and takes a lot of preparation and planning, as employees help to tag salmon, spawn them and ultimately release hatched fry into Maine waterways.

Understandably, monitoring water quality parameters is important to achieving the hatchery’s mission. The most important one that officials keep track of is dissolved oxygen, which has to be kept at optimum levels for salmon to survive.

“We use (a) ProODO for monitoring DO levels during transport for endangered Atlantic salmon broodstock,” said Chris Domina, U.S. Fish and Wildlife Service hatchery manager at Craig Brook.

During transport, adult Atlantic salmon are taken from the Penobscot River during their sea-run and moved to the hatchery where they will be spawned. They are commonly moved using coolers filled with water and the easiest way to check dissolved oxygen in the containers is with a meter made for quick spot sampling. Domina and others also monitor throughout the hatchery, like in water treatment areas, to make sure that healthy oxygen levels are maintained. This means checking to make sure the water meets an oxygen minimum and is not supersaturated. The spot checks also help ensure that the facility complies with standards set by the government. Domina says fisheries biologists, as well as volunteers and students, also collect dissolved oxygen data every couple weeks as part of a lake monitoring program.

So far, the YSI ProODO hasn’t uncovered any surprising oxygen levels at the lake or in the hatchery, which is good for Atlantic salmon breeding there. And the ProODO has been a good tool for those using it.

“We like the user friendliness of the calibration,” said Domina. “And lower maintenance with not having to change membranes in (the) probe.”

Salmon returns to the Penobscot were low in 2014, with only around 250 Atlantic salmon picked up at the Milford Dam on the river. The 372 salmon collected in 2013 was previously the lowest on record, and the 608 that returned in 2012 was the fifth-lowest, according to the Bangor Daily News.

The slim return in 2014 may be related to a new collection location, as the dam that served as the previous collection site was removed. Though that may have some effect, larger threats loom for Maine’s Atlantic salmon. A 2013 study from the University of Maine and the Gulf of Maine Research Institute suggests that climate change and a shifting Atlantic ocean food web have contributed to salmon declines that began in the 1990s.