Crowdsourcing Science and Curiosity Along the Middle Cedar River 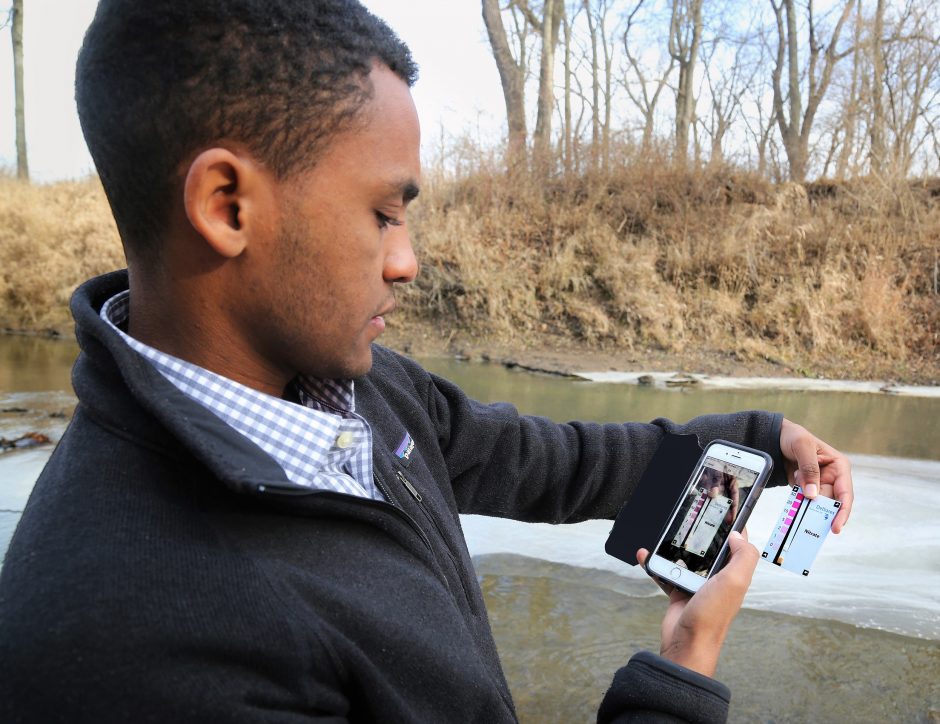 When it comes to natural resources, we occasionally overlook those that we need the most. For University of Iowa (UI) Research Engineer Christopher Jones, one of the most critical and overlooked of these resources is scientific curiosity. Now, with the help of a grant of almost $90,000 from the National Science Foundation (NSF), Jones and his team are making good use of local reserves of scientific curiosity, thanks to the volunteer efforts of citizen scientists.

The citizen scientists are helping Jones and other researchers from UI’s IIHR Hydroscience and Engineering faculty test nitrate levels in the water of the Middle Cedar River and its tributaries as they run between Cedar Falls and Cedar Rapids. The volunteers collect samples of water and dip test strips into the samples. If the strips detect nitrate, they change color. The volunteers then take photographs of the strips and submit those images through a smartphone app that analyzes the images and displays the results online immediately. From there, the results can be accessed by the UI faculty.

Jones corresponded with EM about the project.

“Our interactions with scientists at Deltares in the Netherlands inspired the project,” explains Jones. “We learned of the smartphone app from them 2 or 3 years ago at a scientific meeting in San Francisco, and they demonstrated it to us here in Iowa. They have come to Iowa frequently because the agricultural systems and water quality challenges in Iowa are similar to those in the Netherlands.”

The team monitors nitrate because nitrogen is essential for plant growth, and around 70 percent of the land area of Iowa is devoted to livestock and crop production. However, too much nitrate in water—a common problem in places that make frequent use of fertilizer such as agricultural states like Iowa—can harm animals and humans, and negatively impact water quality on a large scale.

Researchers have linked excessive levels of nitrate in drinking water to birth defects, cancer, hair loss, infant methemoglobinemia (also called blue baby syndrome), rashes, and other health issues. High nitrate levels can cause harmful algal blooms that create toxins; in fact, Iowa is one of the primary sources of high levels of nitrate and phosphorus in the Mississippi River that have created a low oxygen “dead zone” in the Gulf of Mexico.

However, Iowa is dependent upon its agricultural industry, so it is important to find sustainable ways to support farming in the area while protecting drinking water. For example, Des Moines, the largest city in the state, runs the biggest nitrate removal facility in the world as part of the local drinking water treatment plant. The state of Iowa also monitors water in various places, and collaborates with farmers to help reduce nitrate pollution. The university also does its share of monitoring. “The university manages a network or water quality sensors deployed at about 60 sites around Iowa,” remarks Jones. “These are measuring nitrate, turbidity, dissolved oxygen, temperature, and specific conductance.”

The volunteers receive training to take samples, and thus far their readings are very similar to those generated by the lab.

“We give them an hour long training that includes the background of the project and demonstration of the app,” states Jones. “It’s very easy, anyone can use it. About 10% of the volunteer samples are analyzed in the laboratory at the University water treatment plant.”

Volunteers also receive basic materials for their work. Beyond that, they just need a smartphone and motivation.

“They need nitrate test strips that change color when exposed to nitrate in the water,” details Jones. “The smartphone quantifies nitrate based on the color change. We also provide sample bottles so we can assess the app results versus lab results. We provide everything to the volunteers at no charge.”

How often they visit testing sites is up to them; obviously their reports show when and how often they’ve collected the data—and the project is providing monitoring at a volume that would not otherwise be getting done. “Crowdsourcing is an idea that has caught on not only in science but in other fields as well,” remarks Jones. “The quality of each individual data point or piece of information may be less than that generated by trained scientists. But you can generate so much data so cheaply in this manner. We are interested in whether the magnitude of data can buffer or smooth out some of the questions about data quality.”

It’s a valid question; so far, the program seems to be working.

“Really we are less than half way through the project but there is a lot interest and enthusiasm,” Jones states. “People want to make a contribution to solving these big water quality problems. There is so much paralysis in our legislative processes, that is frustrating to people. This project enables people to feel like they are making a contribution. Also I think most people are natural scientists. You don’t need a lot experience, or a degree or formal training. You just need to be curious.”

One benefit that may be unexpected to some is how much research scientists and engineers have to gain from this kind of process.

“Scientists and engineers can learn a lot from these volunteers,” adds Jones. “Sometimes as we go about the daily machinations our work, we lose sight of the fact that the most important trait a scientific researcher can have is curiosity. We can really get stuck in a rut, doing the same or similar things year after year because we know it will work. We sometimes don’t take enough risks with our research. For many of the volunteers, curiosity is all they have, aside from some altruistic instincts. I think we can learn from that.”