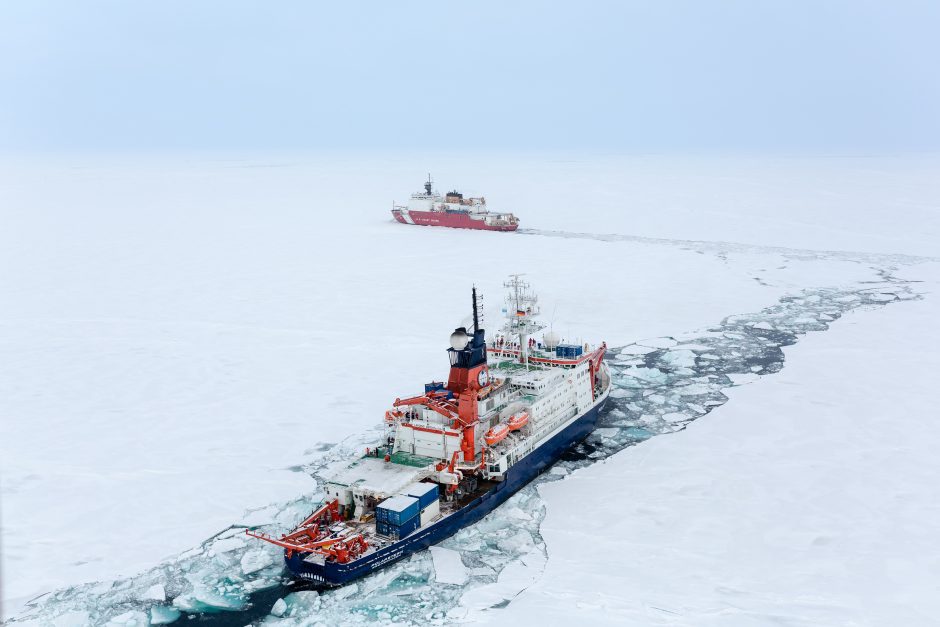 As our climate rapidly warms, polar ice melts—that part we already know. However, rising sea levels are not the only consequence of melting arctic shelves. New research reveals that materials derived from these disappearing shelves are transforming the composition of the water in the Arctic Ocean, threatening species assemblages and biological productivity. The amount of these materials in the water has increased over the past decade, as well.

The GEOTRACES program in action

In the summer of 2015, three expeditions criss-crossed the North Pole region in icebreaker vessels collecting samples and conducting research. All three were part of the GEOTRACES program, an international research endeavor focused on the “marine biogeochemical cycles of trace elements and their isotopes.” Woods Hole Oceanographic Institute Joint Program Student Lauren Kipp, who works in Marine Chemistry, Geochemistry, and Chemical Oceanography, was part of the American expedition that summer.

“We collected water samples in two ways,” Kipp told Environmental Monitor. “To collect water right at the surface, we used a water pump with a submersible intake valve to pump water into barrels on deck. We collected 280 liters of water at each station, which we then slowly filtered through acrylic fiber coated with manganese oxide. The radium in the seawater sticks to the manganese on the fiber as the water is filtered.”

Kipp and her teammates were focusing on the distribution of radium isotopes to determine the sediment inputs from the deteriorating Arctic shelves, because the isotopic imprint these forms of radium leave in seawater are unique.

“I enjoy studying radium because I think using naturally occurring chemical tracers is an elegant way to understand the chemistry of the ocean,” Kipp detailed. “While the word ‘radioactivity’ may cause alarm bells in the minds of some, the naturally occurring radium isotopes in the ocean are not dangerous and in fact provide a very useful tool for oceanographers!”

For samples at depth, the team took a different approach.

“We attached water pumps to a wire and lowered them down to the depth of interest; typically we deployed 8 pumps at a time, spaced out vertically along the wire to collect water from different depths,” Kipp described. “They are programmed to pump water for 4 hours once they reach a certain depth, and they typically filter over 1,000 liters of water during one deployment. The water first passes through a series of filters to collect particles (analyzed by other groups), and then through an acrylic cartridge coated with manganese oxide, which scavenges the radium from seawater (same as the fibers above). These pumps allow us to concentrate 1000+ liters worth of radium on to the cartridges, which we then analyze in the lab.”

Once these collection processes are complete, the team burns the fibers and cartridges, and packs the ash in to small vials that resemble test tubes. They then analyze the ash with gamma detectors, which detect the energy decaying isotopes release. These measurements allow the team to determine the levels of radium-228 in the water that passed through the fibers and cartridges. Map of the Arctic Ocean, with shelf-derived materials (such as nutrients, carbon, trace metals, and radium) shown in green. The levels of radium measured on the 2015 US GEOTRACES expedition are shown in the green shading, with the highest levels near the North Pole. Shelf-derived materials are carried from the East Siberian Shelf to the central Arctic in the Transpolar Drift. (Credit: N. Renier)

“Radium isotopes are great ocean tracers because of their coastal source,” Kipp explained. “They are constantly produced through the natural decay of thorium isotopes in sediments, but unlike thorium, radium is soluble, so when water touches the coast or sediments it picks up the radium. Therefore, if we detect radium-228 in ocean water, then we know it has recently been in contact with the shelf, and this allows us to trace coastal inputs to the open ocean.”

The team chose the 69 stations they used for sampling to provide systematic coverage of the Western Arctic. Parts of the transect were also designed to follow the track of previous cruises, enabling comparisons to historical data.

Implications of the work

These results provide critical insights into the region’s understudied transport processes along with one of the first estimates of how quickly the Arctic shelf is deteriorating. Coastal erosion, permafrost thawing, and river discharge—all fueled by climate change and the rapid rise in temperatures at the North Pole it causes—are affecting the exchange of sediment and water in the Arctic Ocean. Furthermore, comparing these results to those from a 2007 study of the region reveals a notable increase in radium-228 concentrations in surface waters between 2007 and 2015. This has broad implications for the entire region.

“Although radium itself does not impact life in the ocean, other materials with a shelf source (such as nutrients, carbon, and trace metals), are important for sustaining life in the surface ocean,” Kipp stated. “So, if the shelf inputs of these materials are increasing, it implies that the chemistry of the surface ocean is changing, and that this may impact the species living there. For example, if there are more nutrients being delivered, there may be a shift towards species that can better utilize the higher nutrient concentrations. This would most likely impact the tiny phytoplankton species, but changes in the phytoplankton populations could result in changes farther up the food chain. The loss of sea ice is also impacting biology in the surface ocean because it is allowing more light to reach the water. The combined effect of the increased light and increased nutrient/trace metal/carbon inputs could result in more drastic changes in the biology of Arctic surface waters.”

“On a larger scale, these rising shelf inputs are another line of evidence that as a whole, the Arctic is undergoing change,” added Kipp.

Several factors, all linked to climate change, are causing the composition of water in the Arctic to change.

“Because radium-228 is a tracer of shelf inputs, based on our work we can only say that increased inputs from the shelf are one factor influencing the changing Arctic Ocean chemistry,” Kipp cautioned. “However, other factors not as easily traced by radium could still be impacting the ocean chemistry. For example, increased ice melt and river runoff are not major sources of radium to the Arctic, but may be more important for the concentrations of other elements.”

To make accurate predictions about whether and how the Arctic Ocean and the North Pole region will continue to change in the context of climate change, scientists will need to keep monitoring and analyzing the water there.

“We really need to conduct repeated studies in the region to monitor the changes,” Kipp explained. “I would hypothesize that over the next few years as the region continues to undergo substantial changes we will continue to see changes in the water chemistry, but with the limited data we have it is hard to predict the rate at which those changes might occur.”

The loss of sea ice over Arctic shelves allows for more wind-driven mixing, which is likely driving the increased flux of shelf-derived materials. In 2015, higher levels of radium were observed in the Central Arctic compared to 2007. (Credit: N. Renier)

“There have been very few studies in the East Siberian Sea, so we don’t have a good idea of the distribution of radium-228 over this shelf, and we don’t know exactly how the levels of radium-228 in this sea have changed in recent years,” Kipp explained. “Increased data coverage in this region would allow us to better understand whether the changes are happening in one small region of the shelf, or if they are widespread. It would be great if we could collaborate with Russian colleagues to conduct more studies in this region.”

Arctic research: A labor of love

Like many scientists working in this niche, Kipp came to study the Arctic as part of a lifelong love affair with the ocean and science.

“I’ve always been interested in the ocean, and I developed a love of chemistry after taking my first intro to chemistry class in college,” Kipp recalled. “When I was younger my family would vacation on Cape Cod, and when I expressed my interested in oceanography my parents took me to visit Woods Hole Oceanographic Institution—I never imagined that I would be lucky enough to end up working at this world-famous institution!”

The connection between the Arctic and chemistry developed later for Kipp, once she learned more about the effects of climate change on the world’s oceans.

“The Arctic is a unique place for so many reasons, including the fact that it is being impacted by climate change more rapidly than most other places on Earth,” Kipp mused. “While some people may think of climate change as an abstract phenomenon that won’t affect them or isn’t happening yet, this is not the case, especially in the Arctic—this sensitive region is already being affected by climate change, and the people and animals that live there are feeling these changes. I am motivated to do this work because it is important for scientists to understand how these climate-driven changes are occurring and make predictions for what the Arctic may be like in the future.”