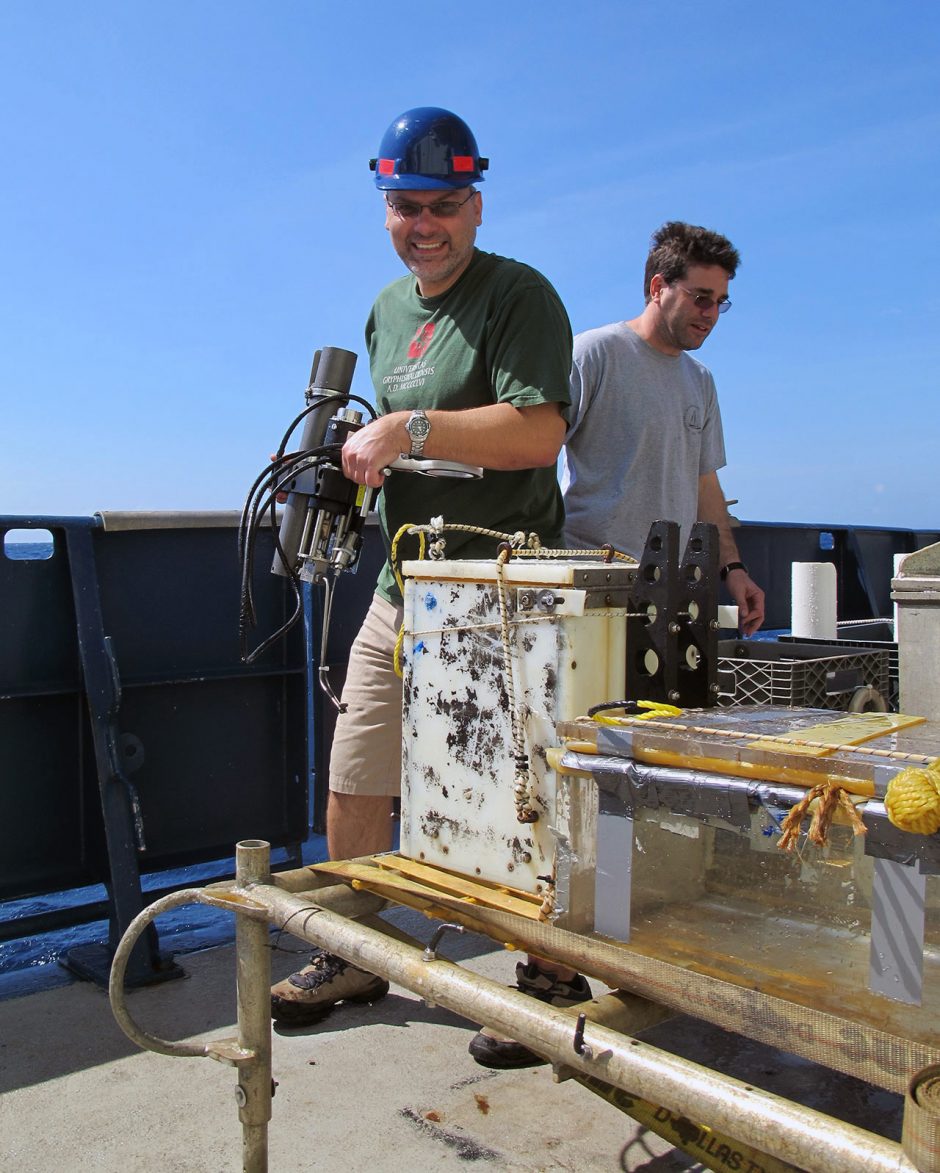 WHOI microbiologist Stefan Sievert carries an IGT back to the ship's lab. At right is WHOI geochemist Jeff Seewald, who developed the IGT samplers. The team uses an elevator to shuttle equipment and samples from the seafloor to the surface and back. (Credit: Jennifer Barone, © Woods Hole Oceanographic Institution, http://www.whoi.edu/news-release/surprisingly-productive-microbes-fuel-deep-sea-ecosystem.)

In any given drop of seawater, there may be any number of the ocean’s most numerous and important citizens: those microbes that make up the base of all food webs. These microbes are plentiful far beneath the water’s surface, in the pitch black of sub-seafloor vents. Forming thriving microbial communities, scientists have long wondered how productive these microbes could possibly be while living under massive amounts of pressure and in the presence of potentially toxic chemicals.

Now, recent research from a Woods Hole Oceanographic Institution (WHOI) team reveals that these vast communities of sub-seafloor vent microbes are more productive than we ever guessed, creating tiny oases of life in some of the most unlikely places on Earth.

“I have been interested in hydrothermal vent systems for quite some time,” explains Stefan Sievert, a WHOI microbiologist and the study’s senior author. “Finding a better way to measure the productivity of these systems, and finding out how much these organisms actually contribute to the productivity of these deep sea vent systems to get a more quantitative understanding has been on my mind. We knew the types of organisms that are there. But what was really lacking is the quantitative aspect.”

Thanks to this research, we now know that these microbe-based vent ecosystems play a critical role in supporting life in the deep ocean, where food sources are few and far between. The team estimates that deep-sea hydrothermal vent microbial communities produce in excess of 4,000 tons of organic carbon every day, worldwide—about as much carbon as you’d find in 200 blue whales. The biomass production places these busy vent systems at the top of the ocean’s list of most productive ecosystems, per volume. 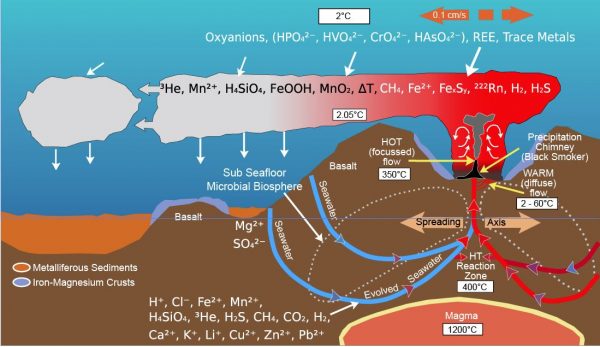 Diagram of the hydrothermal circulation in a mid-oceanic ridge (MOR) system the team may someday soon be studying with the same techniques. (Credit: NOAA.)

“Jeff Seewald, a colleague of mine here at WHOI, developed isobaric gas-tight samplers (IGT),” details Dr. Sievert. “These maintain the pressure of water that’s being sampled at depths and can measure the chemistry of high-temperature vent fluids accurately. For this project, we modified this idea to not only use them to measure the chemistry but also use them as incubators.”

To test the IGTs’ ability to measure the productivity of sub-seafloor microbial communities the team chose to collect samples from a well-studied site: Crab Spa, on the East Pacific Rise.

“We sampled the water, and then onboard the ship we incubated the samples at the right temperature, and then followed the activity of the microbes,” Dr. Sievert describes. “We added different chemicals and took samples over time, and that was also a challenge because we needed to add the substrates as well as take the samples, all the while maintaining the pressure of the incubation vessel.”

“That’s also a novel aspect that hasn’t been done before in this way, that allowed us to really look at the activities of the microbes under simulated in situ conditions, basically,” adds Dr. Sievert.

“We did a total of 16 of these incubations, each lasting for about 12 hours,” remarks Dr. Sievert. “It’s a major effort, the way you add the chemicals and then take the subsamples all has to be done while maintaining the pressure. And then you have to subsample sometimes in the middle of the night. We were all quite busy doing that, especially Jesse McNichol and François Tomas.” 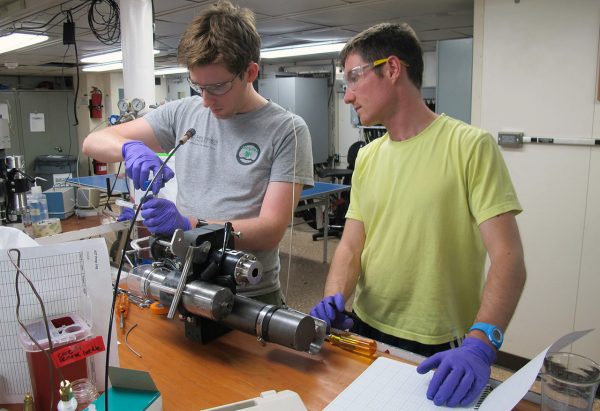 Jesse McNichol (left, with former WHOI postdoc François Thomas) and colleagues conducted experiments on samples of vent fluids collected in Isobaric Gas-Tight cylinders. The IGTs maintain microbial samples in the deep-sea pressure and temperatures they exist in, allowing the bacteria inside to grow as they normally would on the seafloor. McNichol was a graduate student in the MIT-WHOI Joint Program and is lead author of a June 2018 study in Proceedings of the National Academy of Sciences, which showed that subseafloor vent microbes are surprisingly productive. (Credit: Jennifer Barone, © Woods Hole Oceanographic Institution, http://www.whoi.edu/news-release/surprisingly-productive-microbes-fuel-deep-sea-ecosystem)

The team found that these microbes are very active, and relatively fast growing—certainly as fast as microbes at the surface, sustaining a very active ecosystem.

“These deep sea hydrothermal vent systems house species with symbiotic relationships,” comments Dr. Sievert. “We know these systems are quite productive based on these symbiotic associations on the surface of the seafloor. But what was missing was how productive the sub-seafloor actually is, where you also have mixing of hydrothermal fluid with seawater providing really conducive conditions for microorganisms to grow and do chemosynthesis. We found that the sub-seafloor environment is equally productive at these vents as it is above the seafloor.” 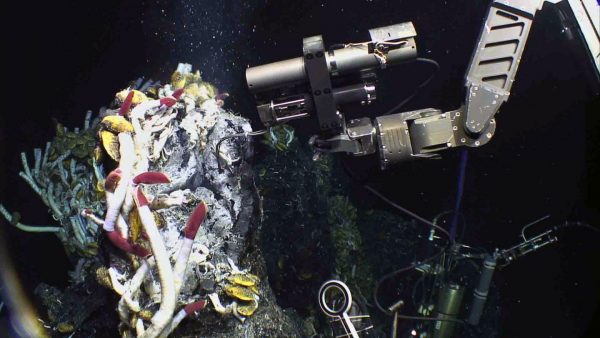 The manipulator arm on the remotely operated, deep-sea vehicle Jason uses an Isobaric Gas-Tight (IGT) sampler to collect samples of fluids and microbes spewing from hydrothermal vents surrounded by a community of tubeworms at a site called “Crab Spa” on the East Pacific Rise. IGTs are designed to maintain the microbes at the pressure of their natural environment. Scientists added various chemicals into the IGTs to measure how fast microbes consumed chemicals and converted them into biomass. (Credit: Stefan Sievert, WHOI/NSF/ROVJason, © Woods Hole Oceanographic Institution, https://www.eurekalert.org/multimedia/pub/172709.php?from=396655.)

This was a major discovery, particularly since it was only about 40 years ago that scientists discovered these deep sea vent sites at all. At that time, the process of chemosynthesis was already understood, but there was no known ecosystem that could be sustained by chemosynthesis alone.

“These chemosynthetic organisms can use chemical energy from oxidizing reduced chemicals, such as hydrogen sulfide, to convert CO2 into biomass, similar to plants and algae living via photosynthesis,” states Dr. Sievert. “Previously one could make some theoretical estimates about productivity based on thermodynamics, on how much energy is available and what we knew from other microbes and how much of that energy might actually be converted into biomass, but this was not really based on actual measurements. So that’s novel, that we were able to to get a handle on this, and provide numbers about how productive these systems are.”

Life throughout the rest of the deep ocean is largely limited by the availability of food that rains down from the surface ocean in the form of marine snow, for example. The deeper you go, the less food is available for deep sea organisms. 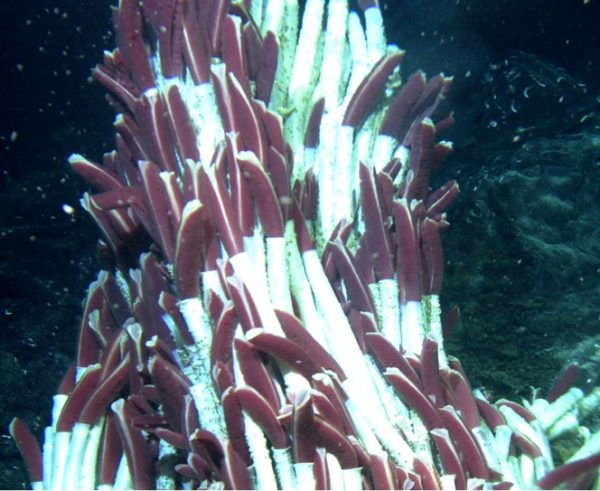 Quantifying how our oceans work

In many ways, quantifying how our oceans work remains a mystery for scientists—and a welcomed challenge.

“We’re just getting a handle on a lot of these quantitative issues,” muses Dr. Sievert. “I mean that’s even true in the surface ocean where it’s easier to go and make these type of measurements. What is the fate of this organic carbon that’s being produced, and how is it really affecting the deep ocean?”

The team has also have developed an instrument that allows them to conduct these types of incubations directly at the sea floor. The result is a new type of sampling instrument that works in tandem with the IGT-based approach: the Vent-Submersible Incubation Device (“Vent-SID”).

“Previously, scientists have made incubations and looked at microbial activity, but usually it was done at the vent temperature or at vent pressure, but not both combined,” details Dr. Sievert. “That’s something that we accomplished with our work, maintaining the pressure and incubating the samples at the vent’s temperature. But we still needed to bring them to the surface, and there’s some time involved in obtaining the sample and actually getting it to the ship and doing the incubations there. To minimize that amount of time, we are trying to get as close as possible to the actual location, and we’re trying to do these incubations at the seafloor.” 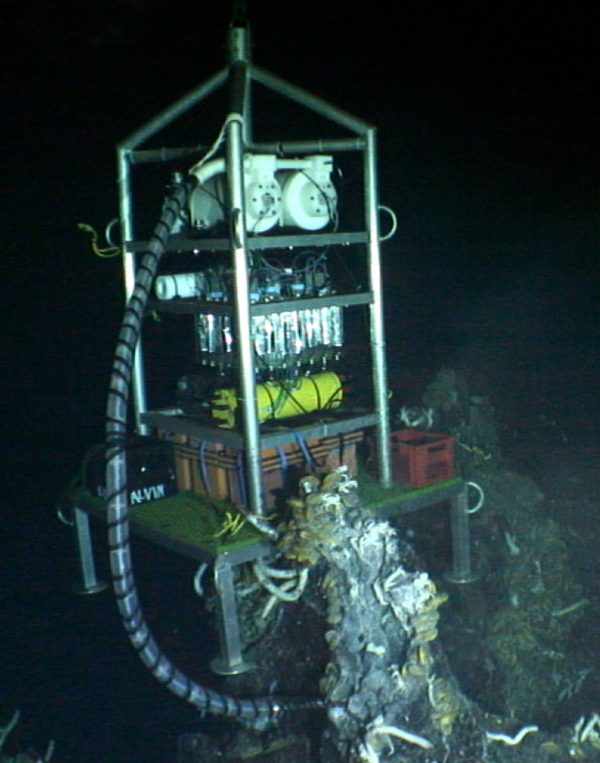 Scientists are also using a new instrument called Vent-SID (Submersible Incubation Device) that can be deployed atop a vent site on the seafloor. The Vent-SID collects fluid from the vent and incubates it in chambers near the top. Then it measures the types and rates of chemosynthetic biochemical reactions performed by microbes at vents. (Credit: Stefan Sievert, WHOI/NSF/ROVJason, © Woods Hole Oceanographic Institution, http://www.whoi.edu/news-release/surprisingly-productive-microbes-fuel-deep-sea-ecosystem)

Other next steps for the team will include studying other vent systems where other chemicals such as hydrogen are abundant, to test whether the productivity changes significantly.

Top image: WHOI microbiologist Stefan Sievert carries an IGT back to the ship’s lab. At right is WHOI geochemist Jeff Seewald, who developed the IGT samplers. The team uses an elevator to shuttle equipment and samples from the seafloor to the surface and back. (Credit: Jennifer Barone, © Woods Hole Oceanographic Institution, http://www.whoi.edu/news-release/surprisingly-productive-microbes-fuel-deep-sea-ecosystem)