Depth An Important Parameter For USGS Researchers In California 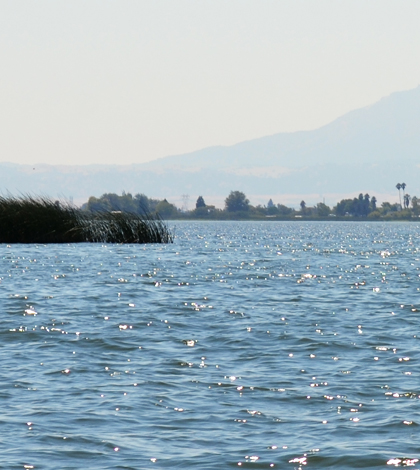 Scientists with the U.S. Geological Survey keep a close eye on California’s water resources, regardless of the location or size of waterbodies. Many are manmade, inland reservoirs, dwarfed by all the saltwater lining the state’s expansive coastline.

Not surprisingly, keeping tabs on the dynamics of these waterways is a lot of work. And we have covered several projects doing so, recently including the use of a data buoy to track the progress of a restoration project in the California Delta and an effort to ground-truth the function of the PRISM sensor, a device that may one day change the way researchers remotely monitor quick-changing conditions in inland bays.

As part of that story on the ground-truthing effort, we skipped over one of the tools that USGS scientists use in many such works. Sure, we mentioned lots of optical sensors like those mounted to water quality sondes, and we covered some of the parameters researchers were tracking. These included turbidity, sediment levels, methylmercury, dissolved organic carbon and levels of chlorophyll. But we didn’t touch on depth.

Depth is an important measurement to take for such ground-truthing works because of the rapid and hard-to-predict mixing that can take place in inland bays. And that is something that is greatly impacted by the distance to the bottom. “Depth is something that is used in conjunction with other things we measure to get a better picture of what is happening,” said Travis von Dessonneck, a hydrologic technician with the USGS California Water Science Center. He and others commonly use an Airmar EchoRange SS510 Smart Sonar Depth Sensor to do so. “Our entire group uses it. It is attached to the boat and is in use anytime we are underway for navigation purposes.”

The sensor also helps researchers to record the depths at which they collect samples. And the parameter is also related to residence-time calculations, which is the amount of time that a substance or particle stays in a system.

“…When used in conjunction with our high-speed mapping, we can measure residence time over a large area,” said von Dessonneck. “We also do a lot of ground-truthing for remote sensing applications and collect hyperspectral and particle quality / quantity data where depth is an important aspect.”

Much of that work takes place in the Sacramento – San Joaquin Delta, he says. A Turner Designs C-Sense PCO2 Sensor also aids in some of the crew’s mapping projects.