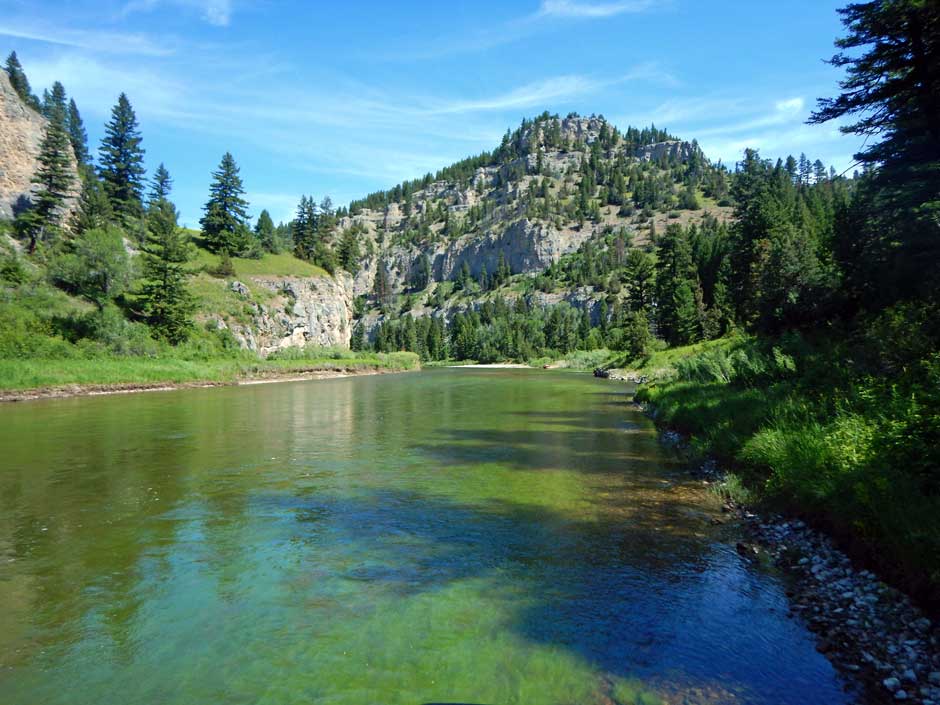 Part of the landscape lining the Smith River as it winds through the limestone canyons of the Helena-Lewis and Clark National park. The Smith River normally isn’t this green, however. A native species of algae called Cladophora is covering its surface. (Photo Credit: Montana DEQ)

An unusual nuisance is slowly growing into an inexplicable problem for researchers at Montana’s Department of Environmental Quality.

For the last five years, a native species of algae called Cladophora has covered large portions of the Smith River, one of the state’s most popular waterways for boating, fishing and recreating. And scientists don’t know why.

“It’s just unusual. I don’t know if it’s extreme for the state of Montana as other systems have had Cladophora problems as well. But it’s most unusual due to the lack of land use changes,” said Chace Bell, a water quality assessment specialist with the Montana DEQ.

Historically a problem for water bodies further south; it’s not unusual to see large sections of the Great Lakes colored green. Agricultural runoff, heavier precipitation and shorter winters have all contributed to an annual algal bloom that taints much of Lake Erie in the summer.

But Montana’s waterways don’t see the same kind of nutrient overload as Lake Erie. Warm temperatures come later in the year and don’t stick around as long once they do arrive. Not much of the surrounding ecosystem has changed in recent years, either.

Located approximately 60 miles east of the state’s capital, the Smith River flows south from White Sulphur Spring through a 55 mile stretch of steep limestone canyons north in the Helena Lewis and Clark National Forest, eventually reaching Great Falls. A lack of development in the area, coupled with scenic views from Montana’s ‘unique gem,’ has made the spot such a popular destination for people to travel that the state has to issue float permits through a lottery system.

While the Smith River looks much different from other water bodies that get covered with algae, it does share some similarities. Since 2015, June has registered 55 degrees or warmer. Plants can grow in temperatures lower than that but at a slow rate. Anything above that and things tend to grow more rapidly.

After Cladophora first reached nuisance levels in the river in 2015, then again in 2016 and 2017, Bell and others at the DEQ initiated a large-scale project in 2018 to find out what was driving the algae’s growth. Click To Tweet

“We developed this overarching question, ‘why is algae reaching nuisance levels in the Smith River and why now?’” Bell said. “Was it a sudden onset that was going to happen one year and not the next? Was it a complete anomaly where we have a sudden onset in 2015, then it’s not as bad and doesn’t reach nuisance levels the years after?”

In the winter of 2018, Bell’s team set lab controls, located relevant environmental research and determined the variables that influence algae growth. Among those variables are water and air temperature, magnitude and timing of discharge, nutrient concentrations, water hardness and pH. 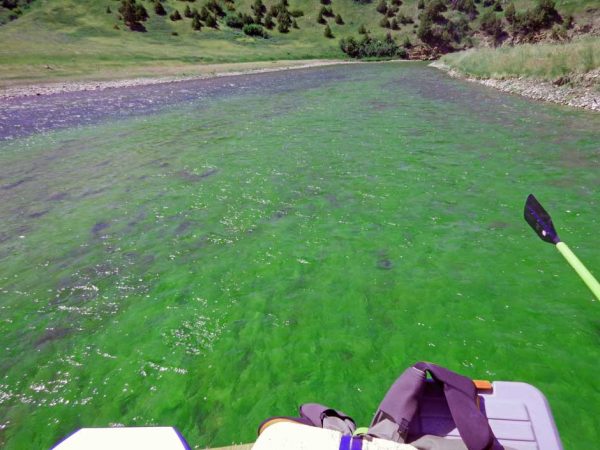 Montana’s Smith River covered in algae. While algal blooms occur frequently in bodies of water further south, they still occur in locations further north as well. Teams from Montana’s Department of Environmental Quality are working to understand why blooms have been appearing in the river. (Photo Credit: Montana DEQ)

“That tells us what nutrient is not sufficiently available to support algae growth,” Bell said. “In the Smith River, what we’re seeing is early in the season, there’s sufficient nutrients of nitrogen and phosphorus. Later in the season in August and September, we’re seeing strong nutrient limitation of nitrogen and phosphorus.”

Determining the source of these nutrients has proven to be a complexity with multiple layers. Along with testing dozens of sites in the water system, the DEQ also added a bio-available phosphorus study that would assess if the nutrient was also present in a dissolved form in suspended sediment particles.

It’s also considering the role that different soil types most recently laid during the last ice age might have in contributing to phosphorus growth.

“Those fairly young soils have a lot of phosphorus in them and they’re now leaching out into our streams and we’re seeing dissolved phosphorus might be playing a role here,” said Bell.

“So what we’re trying to do is fit this puzzle together of increasing air temperatures in White Sulphur Springs, increasing water temperatures in June at Camp Baker,” he added. “Then there’s this timeframe where we know that nutrients aren’t limiting algae growth, which we know is that June timeframe into early July.”

Before 2015, the water temperature eclipsed the 55-degree threshold needed for abundant algae growth in three previous years; 2003, 2006 and 2007. But no algae was ever reported.

Cladophora isn’t toxic like its blue-green algae cousin that grows in Lake Erie. While it’s an unsightly mess that gets caught on oars and in fishing gear and causes problems for local irrigators, it’s not poisonous.

Beyond possible changes to juvenile fish populations, Bell also doesn’t believe it will impact the adult fish species in the area due to the dissolved oxygen decreases that are associated with algae growth. However, it could harm the insect populations.

“From a biology standpoint, if this persists over time, we could see a taxa shift so bug communities might change in the Smith River,” he said. “Mayfly, caddisfly systems might transition over time.”

In partnership with the U.S. Geological Survey, the DEQ is deploying two monitoring stations on two tributaries to build on the phosphorus research conducted in 2019. It will include real-time turbidity meters and gauges, as well as an automated ISCO Sampler for measuring the water’s chemistry during the rise and fall of the hydrograph – which helps Bell’s team better understand phosphorus coming from the tributaries. Data from this year’s study will help researchers decipher when conditions for phosphorus limitation are in play.

“We’ll get a better understanding if there is something that we can do in the future to build resiliency to these algae growth events,” he said.