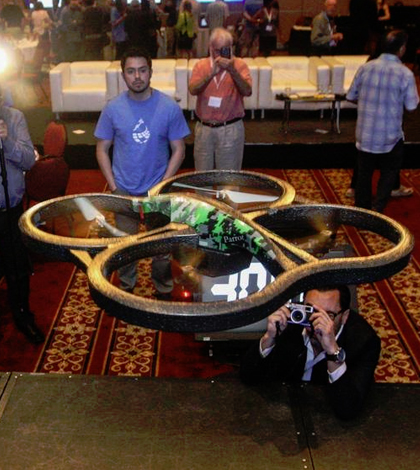 A drone used in the project takes off following a computer’s command. (Credit: University of Toronto)

Monitoring the health of a river requires many types of tasks: visiting sites, gathering samples, fielding calls, evaluating data, determining corrective actions when problems arise and deciding whether changes in monitoring are needed, among others. In many cases, there simply aren’t enough people to do all these tasks effectively. And some tasks, especially repetitive ones, might be done more reliably if they were not being performed by humans, but by intelligent machines.

Alberto Camacho, a Ph.D. candidate in artificial intelligence at the University of Toronto and Patricio Córdova, a master’s student studying applied computing at the same university, took up the challenge of automating many river monitoring tasks to improve efficiency in a prototype system they refer to as the Drone River project. The Drone River project system consists of an automated call center, sensors placed systematically along a river and a series of drones powered by solar energy that can perform a variety of monitoring tasks. The Ottawa River was used as a theoretical test case.

The Drone River monitoring system response starts with a variety of sensors placed along the river of interest. The sensors would monitor the river in real time, looking for readings outside normal parameters to detect problems. An automated call center, which Camacho and Córdova have already developed, would attend to phone calls and text messages and perform language processing to understand problems reported by civilians. A unique feature of the Drone River project is that, in addition to phone calls or sensors looking for problems, a social media search can also be automatically performed to see if anyone is talking about problems in the river, which would trigger a system alert.

As Camacho mentions, “Once the system detects an anomaly using either method or both, the system automatically responds. A drone will be sent to inspect the affected area, taking pictures, recording videos or even deploying extra sensors. This makes it possible to have a complete report that will be sent to the authorities in the required format, thus speeding up the process to solve the problem and preventing its extension.”

Some of the river characteristics the Drone River sensors could continuously monitor for are pH, dissolved oxygen, oxidation-reduction potential, conductivity (salinity), turbidity, temperature and dissolved ions. Córdova adds that, “Since the sensors that take these measurements are connected to the cloud, we can perform the analysis of the water on the cloud and trigger further actions.”

As a part of routine monitoring or in response to sensor information, the drones could also be trained to do routine tasks such as taking samples from the river. Along with their prototype call center and social media monitoring capabilities, Camacho and Córdova anticipate using commercial drones that are about 50-centimeters wide and cost around $400.

Not only could a Drone River system perform many of the routine tasks of river monitoring, it could show improved performance compared to current methods.

Camacho says, “Our technology can scale to cover big extensions of the rivers, and the advantage of being cloud based is that we can increase our computing power as needed. Artificial intelligence will make it possible for the devices to self-diagnose themselves, reducing the traditional human resources needed to inspect hardware.”

Although the Drone River system would need maintenance, like all monitoring systems, the maintenance needs would be minimized, requiring few hours of human labor.

Even though the Drone River system may ultimately be able to replace humans in the performance of routine repetitive tasks, total replacement of humans is not the goal. As Camacho says, “It is true that artificial intelligence and all the information available from the Internet of Things makes it possible to better understand the world and automate some processes. Many processes that are now performed by humans will be performed by machines in the near future with even better efficiency. However, humans have better intuition than machines. As such, humans will still be necessary to make high-level decisions.”

Córdova adds, “Basically, I think that the human experts in the field will never be replaced. If that happened, it would mean that robots took over the world and they don’t need us, which I don’t think would happen in the near nor long future. But robots can gather data, look for hidden parameters in the data, take pictures and take videos. We can set up the whole orchestra and try to give a meaning to everything that surrounds us. I personally see the future of Internet of Things as a place in space/time where humans collaborate with machines. Humans give the meaning to the outcome that the machines produce, and all this happens in order to make our life easier and more comfortable.”