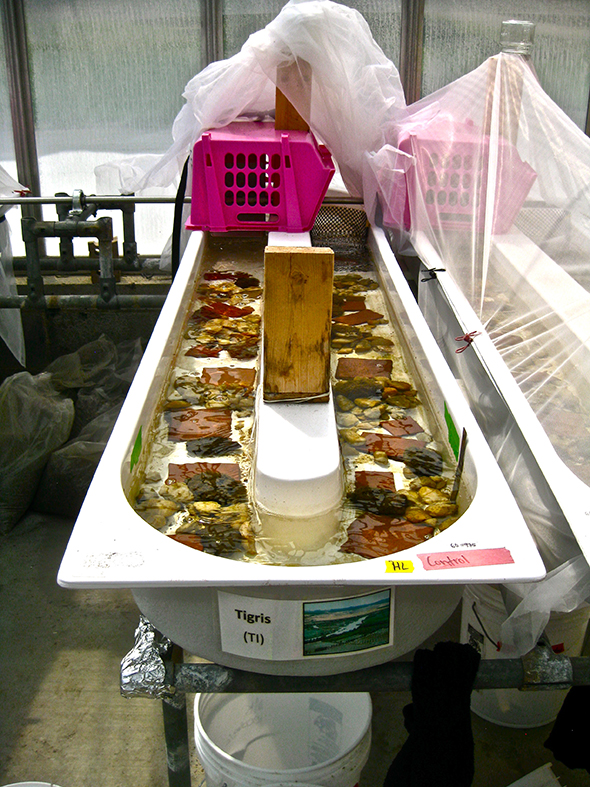 The Artificial Stream Facility at the Cary Institute is used to study the ecological consequences of PPCP pollution. (Credit: Erinn Richmond.)

An unexpected application of the presumption of innocence—toward chemicals in drinking water—means that the regulatory system in the United States does not touch substances in our water until they have been proven to be harmful. The trouble with this is that it can take decades to detect the presence of chemicals in water, and even longer to tease out their effects.

The Clean Water Act (CWA) was passed in 1972, and the Safe Water Drinking Act (SWDA) followed in 1974. Since that time, however, other substances, typically referred to as “emerging contaminants,” have remained ungoverned by these laws, or any others, in terms of their effects on public health. It should not be surprising, then, that new research is revealing that traditional toxicity testing underestimates the risks posed to freshwater ecosystems by pollution from pharmaceutical and personal care products (PPCPs).

PPCPs in our water

In 2000, the EU identified an initial list of 33 priority PPCPs for research and potential regulation. As of 2009, French researchers culling data from studies conducted around the world had identified at least 184 PPCP molecules found in wastewater. The researchers classified the PPCP molecules, with hormones detected most frequently, followed by analgesics and anti-inflammatories, and then antibiotics. A mere 33 molecules occupied about 80 percent of the research attention, worldwide.

However, PPCPs in water have been a mostly unrecognized risk in the US until more recently, at least from a regulatory perspective, largely remaining “undercover.” This is in part because old ideas about risk from compounds in water are based on assumptions about lower levels of substances equating to less risk automatically. Erinn Richmond, a PhD candidate in the Water Studies Centre at Monash University and lead author on a recent study describes the problem with conducting tests that don’t mirror actual environmental conditions.

“Many of the PPCP compounds detected in the environment have been deemed to be low risk, because they occur at low concentrations,” Richmond explains. “Traditional toxicity testing typically measures at what concentration lethality occurs, or the predicted no effect of the compound. These tests are generally conducted at higher concentrations than what occurs in the environment. These tests also utilize single test species often exposed to single compounds, which is not representative of natural ecosystems.”

In their new work, the researchers propose that organism death alone is an insufficient criterion for determining risk, and that criteria for assessing ecological disruption are needed to protect surface waters. For example, the feminization of fish, or the slowed swimming and feeding rates observed in other recent research, might all be relevant to assessing risk from PPCPs. However, these kinds of indicators would not be accounted for if organism death is the only criteria taken into account.

“The examples you describe about feminizing fish (although this is also an example of endocrine disruption), slowed swimming rate and breeding rates are all examples of ecological disruption, and these effects are often subtle and are therefore overlooked with traditional toxicity testing,” comments Richmond. Wastewater treatment plants are not designed to remove PPCPs, which means they simply enter our waterways. This prompts the question of why: is this because we lack the technical know-how, or are other factors at work?

“PPCPs are not contaminants regulated by the Clean Water Act, so there is no legal reason that wastewater treatment plants need to treat for these compounds,” Richmond clarifies. “We have only been able to measure these compounds in the past 15 to 20 years, and so they are not currently regulated. Although wastewater treatment plants do sometimes remove these compounds, depending on the compound and the treatment technology being used, they are not legally obligated to remove them prior to discharge. Finally, when PPCPs are discharged from WWTP, the concentration when entering surface waters is deemed low risk, and as a result knowledge of the environmental risks posed by these compounds is not well-known.”

However, despite low doses, many of these compounds have the potential to disrupt aquatic ecosystems. This is particularly true because they are, in effect, pseudo-persistent, simply because they are constantly added into the water system.

“PPCPs are pseudo-persistent as they can be degraded by microbial and UV degradation, but they are typically constantly added into surface waters,” states Richmond. “Although this is different than persistent pollutants that are not degraded readily, both persistent and pseudo-persistent compounds in the environment result in chronic exposure of aquatic organisms [to] these compounds.”

The way ahead: how to regulate PPCPs in water

Researchers typically evaluate chemical compounds with an ‘LC50’ test to assess toxicity. This kind of testing subjects a single species to higher and higher concentrations of the compound in question until 50 percent of the experimental group dies. It is this concentration—which causes a lethal effect in half of the experimental group—that regulators use to set environmentally acceptable limits. However, the LC50 test ignores numerous important factors, including the biodiversity of any given ecosystem, non-lethal disruption, and the issue of bioaccumulation.

There’s another difficulty here. If traditional toxicology tests cannot cope with the tremendous amount of compound mixing that takes place in reality, where can municipalities that want to start treating for PPCPs begin? If thousands of PPCPs can be found in urban wastewater, how can researchers go about developing tests? Richmond and the research team add low concentrations of pharmaceuticals to artificial stream communities and monitor the system for any signs of disruption. However, combinations of pharmaceuticals present a very complex problem.

“We have begun conducting research on mixtures but given the varying types of PPCPs and the complex mixtures in which they occur make these types of experiments challenging, but very important,” Richmond confirms. “We agree that this is an important frontier in this research.”

Focusing on the source by supporting treatment facilities and wastewater infrastructure will be critical to coping with this issue, although reducing the use of these products would also have a significant impact. However, it seems unlikely that that latter prong of the solution will be practical, so treating wastewater more effectively for PPCPs will probably remain the focus. “The use of PPCPs will likely increase as the proportion of the global population with access to such products and healthcare rises,” Richmond states. “Therefore, first implementing protocols to standardize and quantify the sublethal effects of PPCPs is imperative. Secondly, improvements in infrastructure to promote removal of PPCPs within wastewater treatment plants should be seen as an investment in improving overall global water quality. Determining how PPCP-contaminated water is treated will require further research due to the diversity of contaminants and myriad of environmental conditions that can alter PPCP concentrations.”

Unfortunately, the possible long-term effects of allowing PPCPs to disrupt ecological processes in aquatic environments are basically unknown at this point.

“We now know that at the concentrations detected in surface waters, PPCPs rarely cause mortality, but have the ability to disrupt ecological processes,” Richmond explains. “At this, we do not yet understand what the long-term effects of these compounds in the environment will be.”

However, it is clear that scientific evidence will need to precede any policy changes and regulatory protections.

“One of the biggest concerns, uncovered in our review, was the lack of scientific studies focusing on how contaminants affect ecological processes at environmentally-realistic concentrations,” Richmond points out. “Future effects from organic contaminant pollution is predicted to rise substantially, increasing the number of studies and creating awareness within the scientific community will likely lead to increases in funding and thus expand our knowledge base of this important issue. This needs to be done before we can make substantial headway in influence policy surrounding the environmental release of these contaminants.”

Top image: The Artificial Stream Facility at the Cary Institute is used to study the ecological consequences of PPCP pollution. (Credit: Erinn Richmond)