Droughts May Be New Normal For American Southwest 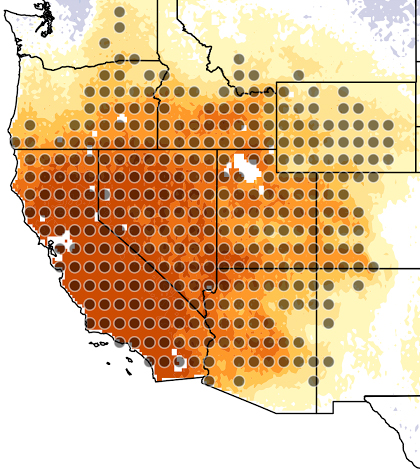 Instead of some relief on the horizon, recent climate data suggest that drier conditions are likely to become the new normal for the southwestern United States.

Andreas Prein, a postdoctoral researcher at the National Center for Atmospheric Research in Boulder, Colorado, and his team examined 35 years of data to diagnose recent changes in the arid climate of the American Southwest. They analyzed chan­ges in weather patterns, which can be thought of as arrangements of high and low-pressure systems that influence rainfall over the contiguous United States.

“Of the dozen identified weather patterns, only three result in higher rainfall in the Southwest,” says Prein. “Those three weather patterns are becoming rarer. That is what the 35 years of data are telling us.”

Problems due to drought in the Southwest are likely to worsen, not only because the area is likely to become drier in the future, but also because an increasing population will put more pressure on the area’s already limited water resources.

In addition, the steadily increasing temperatures of a warming climate cause enhanced loss of soil moisture. The combined effect is a drastically increased potential for droughts in the Southwest.

“We were interested in how weather patterns are related to dry and wet conditions in the United States. Our analysis showed that, since the 1980s, the few weather patterns which resulted in large amounts of rain in the Southwest were consistently becoming less frequent,” says Prein.

For the study, only high-quality data were used. For the weather pattern analysis, two data sets were studied covering the period from 1979 to 2014. Scientists combined a wide range of observations such as satellite data, ground-based and airplane measurements to reconstruct historical weather patterns as accurately as possible.

The data were provided by the National Oceanic and Atmospheric Administration and the European Centre for Medium-Range Weather Forecasts. Four data products were used for the precipitation analysis that are based on surface measurements from about 10,000 to 12,000 stations across the country within a period from 1980 to 2010. Increasingly rare low-pressure systems over the Northeast Pacific (blue areas in top row maps) that bring large amounts of moisture from the Pacific to the Southwest (arrows show the wind direction and speed). The associated large amounts of snow and rainfall in the Southwest are shown in the bottom row maps (blue indicates larger than normal while brown shows lower than normal rainfall). (Credit: Andreas Prein)

“We included a large variety of data in our study to derive a complete as possible picture of the weather pattern and precipitation trends,” Prein says.

Piecing the data together and analyzing all of it took about six months of effort from Prein and a team of researchers. “I gathered the data, but I needed their help to interpret the large quantity of information,” Prein mentions.

Using 35 years of data to analyze past trends in the Southwest, Prein sees a shift in the region’s climate to drier conditions where today’s droughts can happen more easily, last longer and be more intense than at the beginning of the 1980s.

Even though the study does not address the influence of climate change on the results, Prein says that “we do expect to see similar changes in weather types due to climate change, which means that a relation is plausible.” Climate models show that, until the end of the century, the combination of decreasing rainfall with increasing temperatures could lead to droughts in the Southwest that could last for a decade or longer.

The effects of climate change are already noticeable through tree mortality rates and more frequent and larger wildfires in the Southwest.

“Since the 1980s, we have seen a loss of rainfall due to changes in weather patterns of about 25 percent in parts of California. That’s a big loss. The decreasing rainfall trends are decreasing inland but are still significant in parts of Wyoming and Colorado,” Prein explains.

The large amount of data that Prein and his team put together did not allow for drawing conclusions about the role of climate change in their results. In a next step, they plan to use climate models to perceive future trends and model weather patterns from the 20th century to the end of the 21st century. Scientists plan to use a large ensemble of climate models and see if they can find the same trends they saw in the observational data.

“The extensive observational data we have already looked at is consistent with the changes we would expect from global warming,” says Prein. “In the observations, we saw that all weather systems that produce large amounts of rain in the Southwest did significantly decrease in their frequency. It will be interesting if the climate models show us the same process and if they simulate an extension of the observed processes into the future.”

In summary, Prein says that Southwest U.S. droughts now can last longer and be more intense than 30 years ago. “It is plausible that the effects that we are seeing are influenced by manmade climate change,” says Prein, “but we have to check against the climate models to get more insights.”