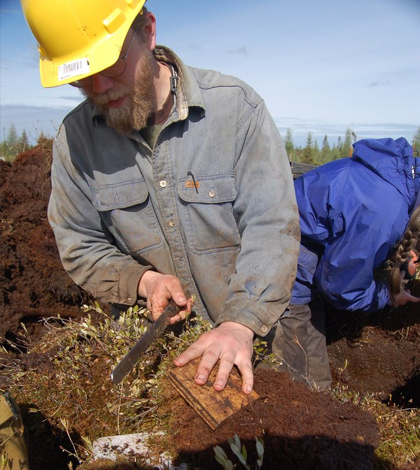 The study of thawing permafrost soils is important because their warming can release greenhouse gases, including methane and carbon dioxide, into the atmosphere. But despite knowledge of that, scientists have long been uncertain as to the ratios these gases are in as they rise into the air.

Scientists want to understand the ratio of carbon dioxide to methane gas released because it affects the strength of the permafrost carbon feedback loop: Greenhouse gases released due to thawing permafrost cause temperatures to rise, leading to more thawing and carbon release. Arctic permafrost is also a key holder of carbon, with about twice as much stored there as is in the atmosphere.

An investigation led by researchers at Northern Arizona University (NAU) took a stab at answering that question using a meta-analysis approach that considered 25 Arctic soil incubation studies. The analysis revealed dynamics of carbon dioxide release were affected by both the conditions of permafrost and temperatures.

One soil incubation study that NAU scientists drew from was completed by investigators at Michigan Technological University. In their study, the Michigan Tech researchers tested the effects of altered hydrology on organic soil decomposition using raised water table treatments and gas probes. They found that carbon dioxide to methane ratios were impacted by dry or wet soils, but that carbon dioxide production was favored in dry ones. Full results of their investigation are published in the journal Soil Biology and Biochemistry.

Data from the 25 other studies were combined with points obtained in a lab investigation at NAU. Within these tests, conditions were made to mimic different scenarios including a range of warmer temperatures and soil oxygen availability.

Most of that carbon was in the form of carbon dioxide, mixed with a very small amount of methane making up just 5 percent of the total anaerobic products. This means that even though methane packs a bigger punch in warming the climate, the small quantity released relative to carbon dioxide in anaerobic conditions makes wet soils less of a concern than dry soils.

Results of the work show that increasing temperatures have a large effect on carbon release from thawing permafrost soils but that changes in soil moisture conditions have an even greater effect, researchers say. Because of that, they predict that permafrost carbon feedback will be stronger when a larger percentage of permafrost undergoes thaw in a dry and oxygen-rich environment.

But as to the future composition of Arctic permafrost, no one can really say. Wet or dry soils both have a chance to dominate. To get a better idea of what the future may hold, NAU researchers plan to integrate the findings of this work into permafrost ecosystem models. The insights will also be shared with the Permafrost Carbon Network, which is part of the Study of Environmental Arctic Change project headed by the University of Alaska, Fairbanks.

Funding for the effort was provided largely by the National Science Foundation. Additional support was chipped in from the U.S. Department of Energy. Full results are published in the journal Nature Climate Change.