E. Coli in the Los Angeles River: How Much is Too Much for Recreational User Exposure? 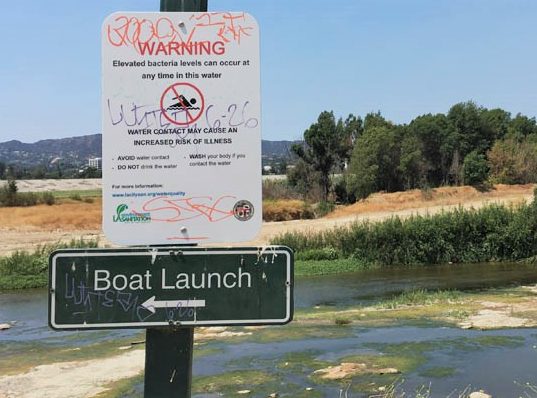 Sign warning of bacteria in the river. (Credit: Heal the Bay)

Although the Environmental Protection Agency (EPA) and other agencies have already answered this question by setting guidelines for E. coli limits in water used for recreational purposes, the question is again being debated in Los Angeles. This is because the city adopted a new protocol in October of 2017 that mandates closing the Los Angeles River to recreational users whenever E. coli levels are too high.

Watershed scientist Katherine Pease of Heal the Bay in Santa Monica is a member of the Los Angeles River Watershed Monitoring Group (LARWMP) Technical Stakeholder Group (TSG). Dr. Pease was part of the group to whom LA SAN presented the new protocol in early November 2017.

“This group consists of various stakeholders, including non-profits and kayak companies,” Dr. Pease explains. “We were all given the opportunity to provide comments on the protocol at that meeting and over the following week.”

The new protocol was developed as a result of a problem that came to light in September of 2017 as The City of Los Angeles Department of Sanitation and Heal the Bay performed regular water quality monitoring of the recreation zones in the Los Angeles River.

“Monitoring was conducted for fecal indicator bacteria during the summer of 2017, and results were shared weekly with the Los Angeles River Watershed Monitoring Group (LARWMP) and a few other stakeholders via email,” states Dr. Pease. “Bacteria levels were alarmingly high in early September, prompting some discussion on whether kayaking trips should be canceled. It was not clear who, if anyone, had the authority to make that call and how to notify kayak companies, river users, and the public.”

Heal the Bay contacted kayak groups via email as no agencies made the information public, and posted on their blog and social media that water quality was particularly poor at that time, urging people to avoid contact with river water until bacteria levels were reduced. In December, Los Angeles city councilperson Mitch O’Farrell rejected the proposal from the Department of Sanitation, in particular its provision to close the river to kayakers when E. coli measurements reach the set threshold. His argument is principally that the closure of the river is an overreaction to the presence of E coli.

Dr. Pease disagrees; in fact, it is Heal the Bay’s position that the proposed protocols require further revision.

“The development of this protocol is a positive step forward for public health protection,” argues Dr. Pease. “The current protocol proposes a red, yellow, green notification system based on twice weekly sampling of E. coli bacteria levels. The red level would trigger a closure of the recreation zones, a yellow level would indicate increased caution, and a green level would indicate that the water is safe.”

Typically, ocean beaches in California are only closed when there is a sewage spill; however, when bacteria levels exceed state thresholds, ocean beaches are “posted” and warning signs are posted at the beach in addition to information provided online.

“Heal the Bay supports the City implementing closure of the LA River recreational zones in cases of sewage spills, and further recommends the City institute a response to chronic pollution problems in the recreation zone, including investigations and clean up measures,” Dr. Pease clarifies. “If closures are enacted at the LA River as described in the protocol, we would like further justification for the use of the E. coli level of 576 MPN/100ml to trigger a closure.”

It is the Heal the Bay team’s position that both E. coli and enterococci single sample and geometric mean values should be used as indicators of public health risk in the river rather than the sole reliance on a single E. coli sample value.

Recreational water use and E. coli

The apparent crux of the councilmember’s opposition to the new protocol has to do with how E. coli harms the human body. The idea is that closing the river is an overreaction because the bacteria must be ingested to be harmful. However, the Heal the Bay team corrects this simplified view of the problem.

“As anyone who has ever kayaked the LA River or other waters knows, you have to wade to get in your kayak, you are typically sitting in water, and splashing water is common on your hands, face, and legs,” Dr. Pease states. “Unless you fall in while kayaking, we do agree that kayaking would typically be less risky than submerged swimming in poor water quality. However, there is still a high degree of water contact when kayaking and we know it is not uncommon for people to tip over in their kayaks.”

“Ingestion of water is only one pathway for getting sick; direct skin contact with polluted water can also cause skin rashes; contact with other body orifices such as the eyes and nose, or cuts or open wounds, are also common pathways for pathogens to enter the body,” Dr. Pease details. “We believe that the public should be adequately notified when the water is not achieving the water quality standards associated with the REC-1 beneficial use.” Heal the Bay’s long game here is really about keeping the public health safer by preventing these kinds of problems in the first place. Based on data from LA SAN and their own monitoring, Heal the Bay’s team estimates that the Los Angeles River would have been closed more than four times in the summer of 2017 had the new protocol been in place. But more importantly, each closure would have triggered an investigation.

During dry weather, urban runoff through our storm drain system is a major source of pollution in the Los Angeles River. In the summer of 2017, a Heal the Bay team found that many storm drains in the Elysian Valley recreation zone flowed consistently every week despite dry weather and contained very high levels of fecal indicator bacteria. This untreated water and the bacterial pollution it contains comes from yards, pet waste, leaky septic tanks, sewage spills or overflows, and even homeless encampments.

“Plans have been developed to address these pollution inputs through best management practices (BMPs), including bioswales, low flow diversions, infiltration basins, and low impact development,” remarks Dr. Pease. “However, many of these important projects will require significant funding; in 2018, LA County will be voting on a stormwater funding fee which Heal the Bay is actively engaged in crafting and advocating for.”

In the meantime, Dr. Pease reaffirms Heal the Bay’s commitment to keeping the Los Angeles River safe for recreational use.

“Heal the Bay has long advocated for public access to and use of open space and waterways; less than 10 years ago we worked to get the U.S. EPA to designate the LA River as a navigable waterway, in part so it could be used more for recreational purposes,” Dr. Pease comments. “Many Heal the Bay staff members and volunteers have kayaked the LA River over the years and will continue to do so. We also believe that the public has a right to know what the water quality of the river is and then to make an informed decision about how they want to experience the river.”

Top image: Sign warning of bacteria in the river. (Credit: Heal the Bay)