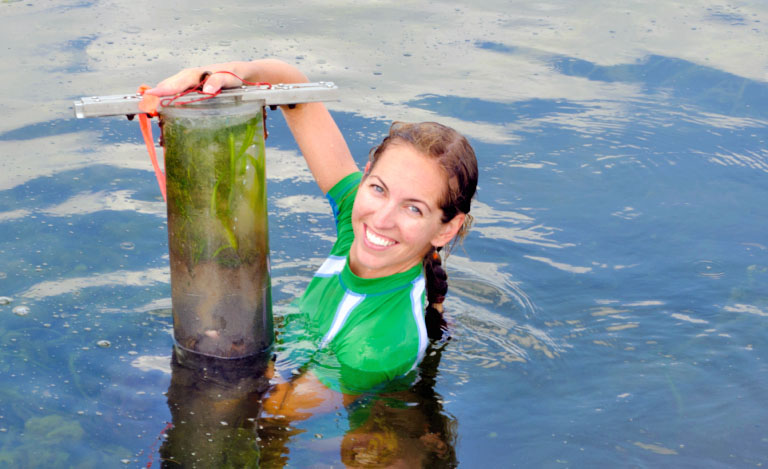 The Chesapeake Bay has been the site of an ongoing water quality and pollution battle for years. In the 1970s, dead fish floated in the Bay along with algae and garbage. A delicate ecosystem at the heart of a heavily populated part of the country, scientists, policymakers and citizens have been working together on each piece of the puzzle in the area. Two of those jigsaw pieces are the stormwater and nutrients that run into the Bay.

Excess nutrients such as nitrogen and phosphorus enter area streams and rivers, and eventually the Chesapeake Bay, nurturing algal blooms and creating harmful conditions for aquatic life. Algal blooms hamper the growth of underwater grasses, and eventually decompose, transforming huge patches of water into suffocating “dead zones.” Agricultural, industrial, and urban runoff all produce excess nutrients, and the destruction of habitats and wild areas around the Bay means more impervious surfaces—and fewer chances for the runoff to be absorbed into the ground.

This is where stormwater comes into play. Less stormwater can soak into the ground where it falls in developed areas, and this produces runoff which eventually ends up in the watershed—in this case, the watershed of Chesapeake Bay. Stormwater runoff is far more than just fresh rainwater; it also pulls nutrients, animal waste, chemicals such as petroleum from the road, sediment, and pollution into the water with it. Once there is a fast enough flow, stormwater can also damage stream banks.

Better understanding of these issues—and the many others that face the Chesapeake Bay—has prompted a number of protective and restorative projects, as well as research in the region. St. Mary’s College assistant professor of environmental studies, Cassie Gurbisz, is one of 14 co-authors of a recent study on the progress of long-term reductions of nutrients in the Chesapeake Bay, and she corresponded with EM about the research.

“The EPA Chesapeake Bay Program provided funding for a group of scientists who study submerged aquatic vegetation (SAV) in Chesapeake Bay to work together to 1) assess what we already know about SAV in the bay and 2) analyze environmental monitoring data to determine what is driving recent trends in SAV abundance,” explains Gurbisz.

In the article, the team reports that long-term nutrient reductions have had a positive impact on the ecosystem. Thanks to this reduction—a 23 percent drop in average nitrogen levels and an eight percent drop in average phosphorus levels—together with other restoration incentives, the health of Chesapeake Bay is improving. The resurgence of underwater grasses, now four times more plentiful than before, is most notable to the team, and an unprecedented recovery event worldwide. What specific activities were most effective in bringing about this reversal?

“This is still an active area of research,” explains Gurbisz. “But preliminary evidence suggests that the largest reductions have resulted from wastewater treatment upgrades. The Clean Air Act has also helped cut nitrogen emissions from power plants and automobiles.”

The researchers were able to show definitively that the ecosystem recovery was directly linked to the reduction of excess pollutants like nitrogen and phosphorus. The team connected the state of the Bay and land use by attacking the data in two different ways. They showed how SAV reacts when nutrients are in the water on the one hand, and they also analyzed the cascade of nutrients between the water and the land.

The various participant scientists who undertook the project participated in a series of workshops focused on SAV ecology. This allowed them to collaboratively develop the project’s conceptual basis.

“The workshops were funded by the EPA Chesapeake Bay Program with the goal of providing the time and space for scientists to work together to determine what factors are driving recent trends in SAV abundance,” details Gurbisz. “SAV recovery is a key goal in restoring the Chesapeake Bay. Local jurisdictions need to know how SAV are doing in their local waters so that they can fine-tune their restoration strategies.”

There are two main takeaways from the work. The first is that, although nothing is certain, if nutrient loads stay on track, recovery should continue. 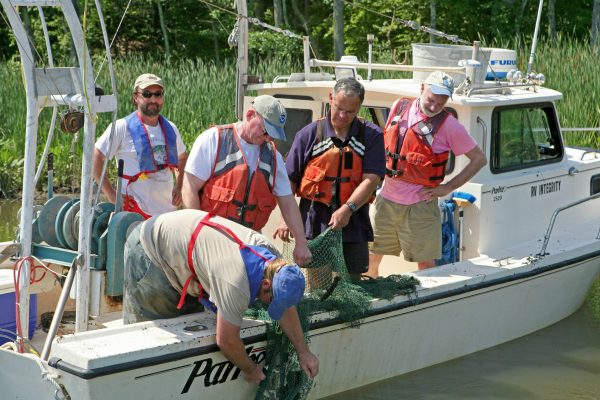 On June 12, 2007, hundreds of NOAA employees and partners participated in the 4th annual NOAA Restoration Day in Maryland and Virginia, one of many environmental stewardship events in the Bay watershed. (Credit: By NOAA Photo Library (post130b) [CC BY 2.0])

“It’s difficult to predict exactly what will happen in the future because other factors, like weather, also play an important role in SAV dynamics,” states Gurbisz. “In addition, the recovery is mainly only happening in low-salinity areas of the Bay. However, if nutrient loads continue to decrease, our study suggests that this will help induce further recovery.”

The other takeaway? Although this is an inspiring good news story, now is not the time to get complacent about restoration of the environment and aquatic ecosystems.

“This is a good-news story about the environment!” remarks Gurbisz. “But it is also important to remember that SAV in the mid and high salinity regions haven’t recovered. This is possibly because the species that inhabit these regions need more light than their freshwater neighbors. So if nutrient loads continue to decrease, we could see similar responses in the higher salinity waters. The Bay isn’t fully ‘restored’ yet, but the freshwater recoveries demonstrate that restoration efforts are finally beginning to work. This highlights the need for continued restoration efforts.”