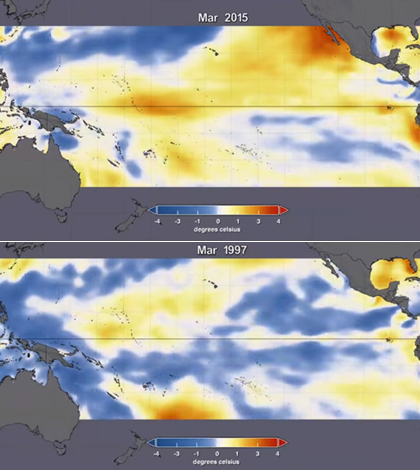 Researchers are looking into the differences between the 2015 El Niño and the 1997 El Niño. (Credit: NASA)

Because of the powerful effects they can have on established regional weather patterns, especially with respect to rainfall, scientists have worked hard to study and predict El Niño events and their potential outcomes. In a release from NASA, researchers show data that enable them to distinguish the El Niño event of 1997 to 1998 from the El Niño event of 2015, revealing each weather event, while still classified as an El Niño, as having unique properties.

To examine the differences between the two El Niño events, scientists used information from ocean buoys, satellite images and atmospheric models. This input was used to inform the Goddard Space Flight Center’s computer models of the events.

Seasonal forecasts of El Niño behavior took 18 hours to complete and used 9 Terabytes of data. The 2015 El Niño model suggests that normal sea surface temperatures should return by June of 2016.

Top image: Researchers are looking into the differences between the 2015 El Niño and the 1997 El Niño. (Credit: NASA)