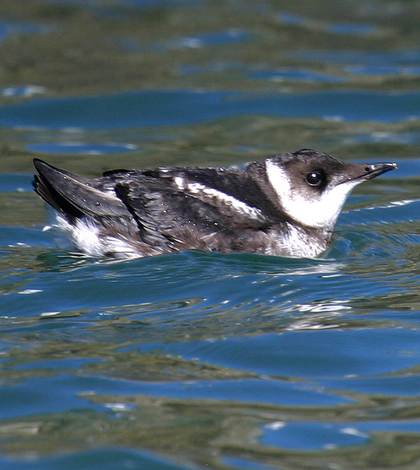 There are many ways to track marbled murrelet populations, birds from the North Pacific that are listed as endangered. These include using a boat to go up and down the California coast and count them at sea, using marine radar to track their flights from the ocean into the forests, or sending out surveyors who know their calls to the forests where they nest in. Forest surveys in particular are important, but expensive, requiring sending trained biologists to remote, forested locations on multiple mornings to detect the rare birds.

Researchers at the University of California, Santa Cruz, are working to minimize that issue with the help of acoustic devices that can be programmed to monitor for the murrelets on their own, reducing costs and thereby saving some cash that can go toward conservation actions instead.

In a recent effort beginning in June and lasting through August 2010, the scientists used acoustic recorders to detect the birds’ calls at seven sites throughout the Santa Cruz Mountains. During the same period, trained biologists went out to the sites and did their own surveys, relying on their own ears and eyes.

“In the Santa Cruz Mountains, it’s the southern edge of the marbled murrelets’ range. A lot of energy is going into managing their populations,” said Abe Borker, a graduate student in the university’s Department of Ecology. “Having done a few murrelet surveys where you go out and listen, and from other seabird research we’ve done, it seemed like we could use acoustic instruments instead.”

In a previous study, Borker and others had used a similar approach to study the abundance of Foster’s terns. And some of the same methods were used for detecting marbled murrelets. Automated acoustic recording devices called Song Meters served in the effort. These were programmed to sample an hour before dawn to two hours after dawn each morning. The human surveyors, meanwhile, went out during the same periods.

After the acoustic recordings were brought back to the lab, Borker says the data were plugged into a computer algorithm that could identify murrelet sounds. These detections were tabulated and then compared to those made by the human surveyors.

The results were quite telling, as human surveyors handily beat out the automated sensors and detection tool in accurately identifying murrelet calls.

“On any given morning, acoustic sensors and automated detection detected less marbled murrelets than human surveyors,” said Borker. “But unlike humans, who only visit occasionally, we can program acoustic sensors to sample over the course of hundreds of mornings.”

The resolution of the data collected was a surprise to Borker. In addition to detecting their presence, the acoustic sensors revealed some insights into the birds’ activity patterns over the breeding season.

Full results of the study have been published in the journal Wildlife Society Bulletin.