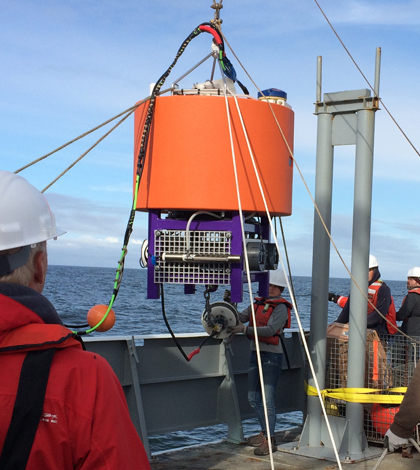 The box surrounded by purple contains an environmental sample processor that will analyze seawater for algal species and toxin. Researchers deployed it May 23 about 13 miles off Washington’s coast. (Credit: Stephanie Moore / National Oceanic and Atmospheric Administration)

A few years back, the Environmental Monitor covered the environmental sample processor (ESP) as it embarked on an effort to study the microbial life of the Columbia River Estuary. But nowadays, this relatively new type of monitoring platform is ready for a bigger job: deployment in the ocean.

In late May, scientists with the University of Washington and the National Oceanic and Atmospheric Administration (NOAA) launched an ESP off the coast of La Push, Washington in a bid to stay ahead of algal blooms and the toxins that sometimes come with them.

The device was deployed with sensors to monitor specific algal species and a harmful toxin they emit called domoic acid. The tool will provide autonomous, near-real-time measurements of the amounts of toxin and the concentrations of six potentially harmful algal species.

The ESP was placed 13 miles offshore in the Olympic Coast National Marine Sanctuary. It is near the Juan de Fuca eddy and in a known transport path where offshore Pseudo-nitzschia blooms – a common Pacific harmful algal species – travel to coastal beaches where they can contaminate shellfish. It sits about 50 feet below the surface near the ChaBa buoy, a mooring deployed in July 2010 that tracks surface water carbon dioxide and pH as well as surrounding atmospheric carbon dioxide and other parameters.

The tool was developed at the Monterey Bay Aquarium Research Institute (MBARI) to automate water-testing that normally requires a boat trip to sea and then analysis in a lab. MBARI scientists helped install the ESP that will beam results back to shore three times a week for the next six weeks. The research team will collect the tool in July and then deploy another ESP to monitor during the late summer season. An environmental sample processor shows the robotic arm, valves, levers and reagents it uses to do testing at sea. (Credit: National Oceanic and Atmospheric Administration)

The real-time data on bloom toxicity and algal species biomass will be made available directly to state coastal managers and public health officials, including coastal tribes, through the website of the Northwest Association of Networked Ocean Observing Systems, or NANOOS.

Coastal managers will use the early warning data from the instrument to inform proactive shellfish toxicity testing and to facilitate timely decision-making on shellfish harvesting opportunities and closures.

The new data will also be made available to U. of Washington oceanographers to help develop a computer forecast called LiveOcean that simulates how currents travel and affect local marine conditions along Washington’s coast, Puget Sound and Canada’s Strait of Georgia.

Top image: The box surrounded by purple contains an environmental sample processor that will analyze seawater for algal species and toxin. Researchers deployed it May 23 about 13 miles off Washington’s coast. (Credit: Stephanie Moore / National Oceanic and Atmospheric Administration)