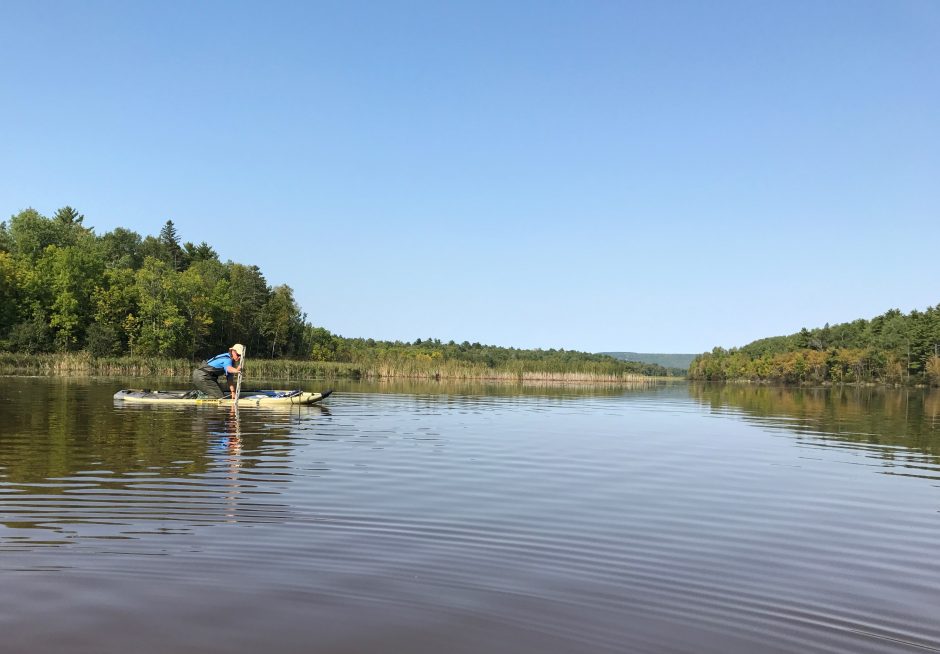 Hannah Ramage and the St. Louis River go back several years. “I went to University of Minnesota at Duluth for my master’s degree, where I did research on the St. Louis River estuary,” says Ramage, now the Monitoring Coordinator for Lake Superior National Estuarine Research Reserve (NERR). “Working here was a great opportunity to keep doing the research that I loved doing,” she says. “I’ve always been drawn to this NERR system.”

In addition to the System Wide Monitoring Program (SWMP) that all 29 NERRs use, Lake Superior NERR is also experimenting with sending their EXO2 sondes under St. Louis River ice this year. “We want to see how well the probes do for us,” says Ramage. “We’ve seen high chlorophyll a concentrations under the ice and want to keep an eye on it. We want to see if there’s algal blooms.” The sondes collect temperature, conductivity, dissolved oxygen, turbidity and pH data. One station, at Barkers Island, closest to the exit of the River, right at the end of the dock, also has a sonde with a chlorophyll a and a total algae sensor.  Barkers Island has a live setup in coordination with NOAA that transfers all Barkers Island data telemetrically. Barkers Island is also the site of the education center, Lake Superior Estuarium. The sonde furthest upstream is on Oliver Bridge, by the town of Oliver, WI. This particular sonde is stored in a housing attached to the bridge. Another site housing a sonde is at the Blatnik highway bridge. Both bridges have the same kind of sonde housing.

Like all NERRs, Lake Superior NERR does vegetation monitoring. However, the Lake Superior site has a different emphasis than some other NERRs: invasive species. “We are concerned with invasive species here,” says Ramage. “The St. Louis River estuary contains the largest port in the Great Lakes (by tonnage), and therefore we get a lot of non-native species introductions. There’s an invasion of purple loosestrife, which chokes out native plant species when it gets a chance. We specifically monitor for purple loosestrife at our sentinel site, as it’s very adaptable and prolific across areas. It competes with sedges and grasses. There’s also rusty crayfish, they’re an issue too. Round gobies, Eurasian ruff, tubenose goby, spiny water flea…all of them have come here, and they influence the ecosystem.” Interestingly, some invasive species are currently being controlled naturally. “Zebra mussels are a devastating invasive species in many other places, but here they don’t have enough nutrients in most of areas of Lake Superior, so they’re confined to the harbor, along with quagga mussels,” Ramage explains.

Purple loosestrife can sometimes be controlled in Pokegama Bay by very high water. “Of course in that case, none of the typical native vegetation was growing either,” Ramage says. “We don’t have the final data for 2017 yet.”

Ramage’s colleague, Shon Schooler, Lake Superior NERR Research Coordinator, does the most work on the purple loosestrife issue, as well as the rusty crayfish. Besides Ramage and Schooler, there are two undergraduates from the University of Minnesota and the University of Wisconsin-Superior who also perform research tasks at Lake Superior NERR. Students calibrate sondes, collect monthly water nutrient sampling and conduct their own research. “We also have an Education Coordinator, Deanna Erickson, who likes to get students engaged in research with us,” says Ramage. In addition to the tasks those students perform, there are many students who act as citizen scientists (volunteers) from both Wisconsin and Minnesota. “We’d like to get more participation from more college students, too,” says Ramage. Around 60-100 students participate throughout the year, and many K-12 and college students use the education facilities at Lake Superior NERR. “Students get grab samples (water samples), sonde water quality data, which gets utilized in the lab,” says Ramage. “Shon teaches an Environmental Research Methods class at the University of Wisconsin-Superior. We have programs all year.” The Reserve is a state-federal partnership with the University of Wisconsin-Extension being the primary Wisconsin partner and NOAA is the federal partner.

In the past few years, the estuary has gone through some changes. “There was a big flood in the St. Louis River in 2012, which had effects we are still understanding. We also discovered that there were high levels of chlorophyll a under the river ice, despite the cold weather. We didn’t really expect winter algal blooms,” she says. “We don’t have baseline data to compare how unusual the under ice algae phenomenon is.” In Lake Superior NERR, floods have become more common in recent years. “We’ve also seen that whatever happens to the St. Louis River affects the Lake,” says Ramage.

The St. Louis River estuary is “a Great Lakes Area of Concern,” Ramage mentions. “Historically, the river has seen some significant contaminants.” Researchers have been looking at how much sediment the river is moving in the water column, and what materials the river is moving. “It would be great if we could get a team of people to better monitor flood events,” says Ramage. During her career studying the St. Louis River estuary, and during her time at Lake Superior NERR, Ramage has developed a great appreciation for the uniqueness of doing research in the Lake area. “We have a very dynamic system here,” she says. “Recently, because of high water levels in Lake Superior, our long term vegetation monitoring has revealed areas where, conditions have rapidly changed. Also, Lake Superior water levels affect conditions way upstream, more than you might think. In Pokegama Bay, for example, habitat can change completely because of Lake levels. Plant communities can change drastically here over the course of a single year.”

As time goes by, Ramage continues to enjoy research at Lake Superior NERR. “The Great Lakes have great appeal,” she says. “I grew up near Lake Michigan, and when you grow up near a huge lake like that, you never want to leave.”

She especially likes the freshwater estuary, something Lake Superior NERR has. “They’re different from coastal estuaries,” she says. “We have a really dynamic river here and a huge commercial port. It’s a really rich place to do abiotic and biological research.”

Ramage also likes the local community. “There’s a really palpable sense of making connections with people who have devoted their lives to upholding this place. We have challenges here, such as remediating contaminants, restoring fish and wildlife populations, and restoring wetlands and shorelines. But the community here definitely gives you a sense of optimism. There’s a feeling here that we can fix it!”