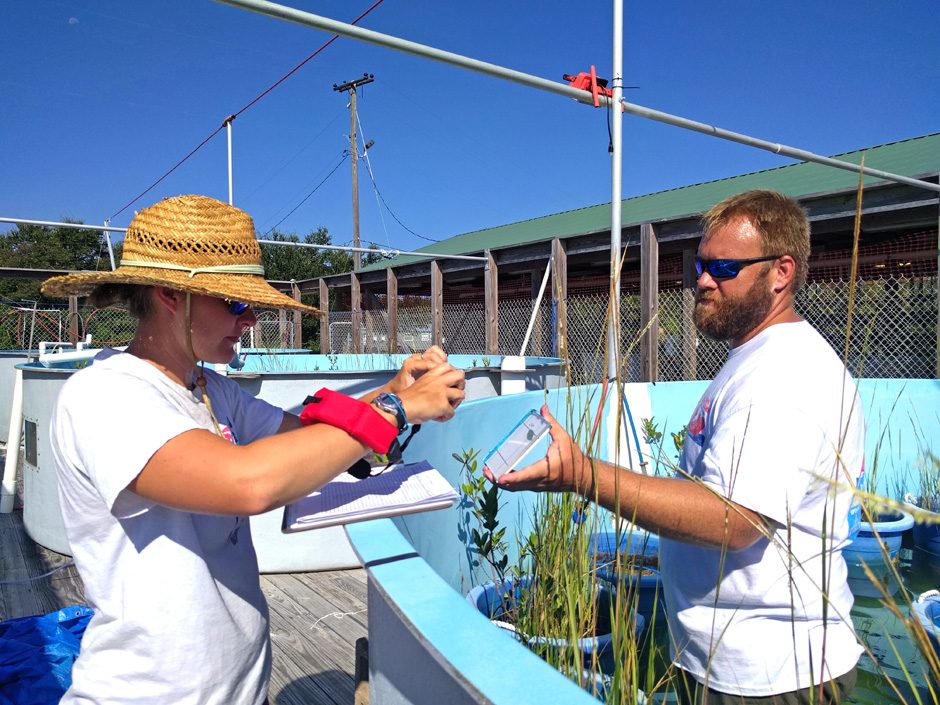 When the Deepwater Horizon oil spill happened in 2010, media outlets were flooded with images of oil-covered birds and dead jellyfish. Wildlife populations of many kinds plummeted. Fishing and tourism plunged with them. The Deepwater Horizon spill was considered one of the largest environmental disasters in American history. Years later, populations were still struggling and oil was still washing up on Gulf coast beaches. The question on the minds of many people was: Can the Gulf Coast environment ever recover from such a catastrophic event?

Ken Heck, Professor Emeritus at the University of South Alabama, Senior Marine Scientist at Dauphin Island Sea Lab and Associate Director at the Alabama Center for Ecological Resilience (ACER) was one of a dedicated group of scientists who joined forces to try to find out the answer.

“The purpose of the ACER Consortium was to look at how biodiversity influences an ecosystem’s resilience, or how able it is to withstand disturbance. We were especially focused on looking at coastal ecosystems of the northern Gulf of Mexico and how they responded to the 2010 Deepwater Horizon oil spill,” says Heck. “We’re at the last phase of ACER now, where we are pulling together the results. Ultimately it will all turn into a report. We’re currently working on data synthesis.” 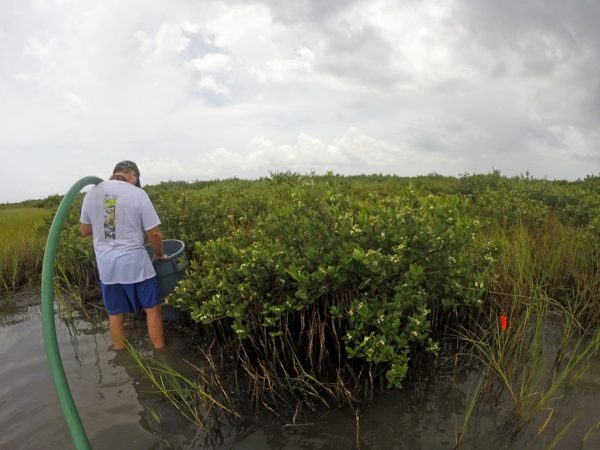 The ACER Consortium has investigated the relationship between ecosystem resilience and genetic, taxonomic and functional diversity at different scales and for many different organisms exposed to oil. Seven integrated research groups were covering the area from the mid-continental shelf to inshore oyster reefs and coastal wetlands. The results will improve marine scientists’ understanding of oil spill impacts on ecosystems and also further understanding of the potential for recovery.

Some of the data taken for ACER on Gulf of Mexico coastal ecosystems included chemical changes, nutrient shifts measured with a Skalar autoanalyzer and microbes present (DNA sequencing), ultimately shedding light on the role of biodiversity in the ecosystems.

Since a proper amount of nitrogen is important for organism growth and ecosystem health, denitrification was an important topic of interest in the ACER studies. Nitrogen dynamics explored investigated nitrogen loss occurring in the ecosystem. Nitrogen loss in sediments was studied, as well as nitrogen loss in wetlands and salt marshes. “We looked at whether oil could influence the availability of nitrogen to microbes,” says Heck. “We looked at shifts in denitrification in the field,” Heck mentions. The ACER nitrogen investigation included both field studies and mesocosm studies. The mesocosms studies utilized 5,000-gallon tanks fed with Gulf of Mexico water. Light levels in the mesocosms were measured using a Li-Cor Photosynthetically Active Radiation (PAR) spherical sensor. 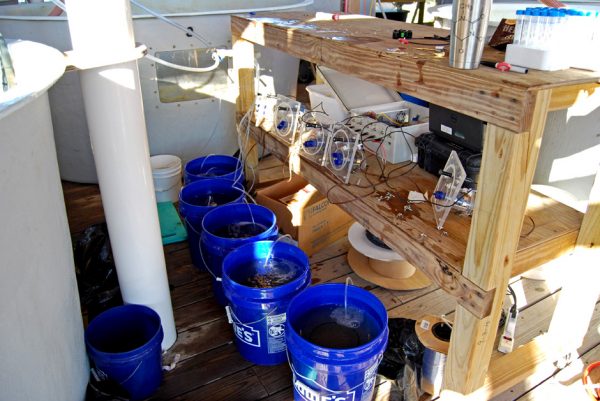 Another part of the ACER studies were the Chandeleur Islands breeding bird studies. Chandeleur Islands are uninhabited barrier islands at the easternmost point of Louisiana. “It was an excellent place to study the effects of the spill since it was decided that the area would not undergo cleanup to avoid further disturbing the breeding birds there. Our study started five years after the spill. Prior to that, we used data others had gathered in the previous years,” says Heck.

The data gathered contained some surprises for Heck and the other ACER researchers. “The nearshore areas were not affected as badly as we thought they would be,” Heck recalls. “These were ‘nursery areas’: marsh, seagrass and oyster habitats in highly productive areas that we expected to be devastated. Instead, they weren’t wiped out. They were recovering.”

Other species were highly affected. “Turtles, sea birds and mammals that became covered in oil suffered a lot,” Heck notes. “Many of those died. For the ones that survived, we saw reduced success in reproduction.” 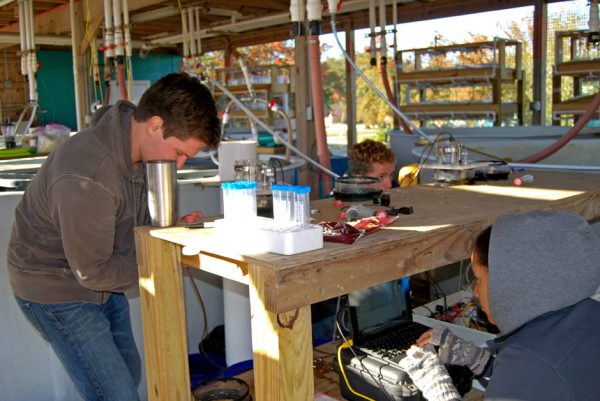 For microbes, however, the effects were sometimes very different. “Off the coast of Louisiana, a distance away from the spill, there did not seem to be negative effects on microbial populations. In fact, for microbes out in the Gulf of Mexico, it seemed like the oil even ‘fertilized’ the microbes and there seemed to be significant microbial growth,” remembers Heck. “This may not seem to make sense until you realize that there are over 1,000 areas in the Gulf of Mexico that naturally seep oil. So these microbes had already adapted to metabolize the oil. We saw evidence of microbes eating oil in the water, and we also found microbes in the soil around the Gulf of Mexico that could metabolize oil as well.”

“We initially thought that the more biodiversity an ecosystem had, the better its resilience would be. We thought an ecosystem with more species and genetic diversity would be able to recover from a catastrophic oil spill more effectively,” says Heck. “While biodiversity does have some effects, the data shows us those effects are small for the Deepwater Horizon case.”

The Gulf of Mexico marshes they studied experienced natural, mild oil seeps, so the species in the marshes may have mildly adapted to the oil before spill exposure. “The dominant plant found in salt marshes in our studies was Spartina alterniflora. We also looked at the role of genetic diversity within the Spartina. Contrary to what we might expect, we found diversity did not provide extra protection,” Heck says. 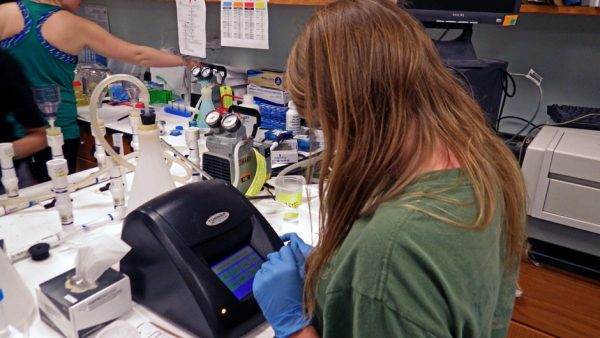 In some cases, it was difficult to find the desired differences in diversity that would allow researchers to evaluate the effects of the oil spill on diverse and less diverse populations. “For our microbial studies, we were not able to alter the diversity of our microbes, as we did not have the cultures we would need to do that,” Heck mentions.

“Generally what we found was that whether the species were diverse or not, they were still able to recover from the oil spill,” says Heck. “The effects were less than we thought they would be.”

However, the fact that natural oil seeps exist in the Gulf of Mexico may have prepared the species to some extent for the major oil spill, giving them some time to adapt before the big event. Natural oil seepage may have influenced the results in a way that would not translate to another site that did not have the seeps.

“A study of the biodiversity of ecosystems impacted by the Exxon Valdez spill in Alaska might have yielded different results,” Heck suggests. “There aren’t natural oil seeps at that site. It’s also a cold environment with rocky shores, very different from the Gulf of Mexico. A study like that might have shown more biodiversity effects on oil spill recovery.”

Other factors to consider include the nature of the Deepwater Horizon spill, its location and the state of the oil once it reached various organisms. “The oil was weathered by the time it reached the coastal ecosystems,” says Heck. “A lot of the oil never even got to the coastal habitat. About 30 percent of the oil volume just went into the atmosphere. A significant portion never made it to the surface. There is still a lot of oil deep in the Gulf of Mexico, and the biological activity very deep in the Gulf of Mexico is very slow. All of those things have an effect on the behavior of organisms in the Gulf and the ways in which they reacted to the oil spill.” 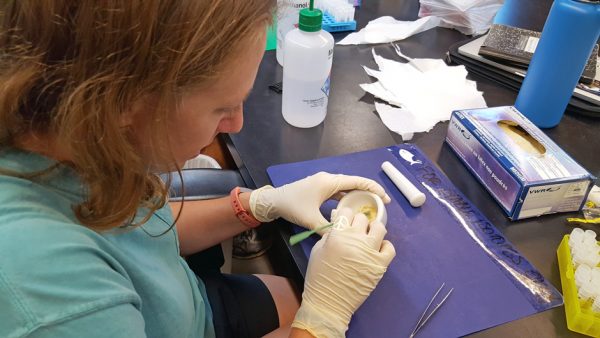 Another factor to consider is the inherent nature of Gulf of Mexico marshes. “These marshes are resilient because they have to be. These species live in a stressful environment. It can be hot, with lots of variations in water flow. Temperatures can also get down to freezing. There’s also lots of variation in salt concentration, from freshwater all the way to drought (high salt) conditions. Plants that can live under those conditions are already pretty hardy,” Heck reflects.

Heck has been working on nearshore environments for a long time. “For the ACER work, we have tried to answer questions about whether seagrass environments will be destroyed, will nursery beds be destroyed and will the Gulf of Mexico ecosystems be destroyed because of the oil spill. From what we have seen, the areas seem to be resilient and are recovering,” Heck says.

While the Gulf of Mexico’s coastal ecosystems have avoided total destruction following the Deepwater Horizon oil spill, it was not without a lot of human cleanup efforts and the effect of the natural resilience of the coastal species. Much marine animal life was lost, resulting in human losses of food, tourism and recreation, a human economic cost of billions of dollars. The Deepwater Horizon incident shows how deeply marine creatures’ well-being is tied to human well-being.

“As I always say, and as we have learned over and over again: ‘A good economy depends on a good ecology’,” Heck says.