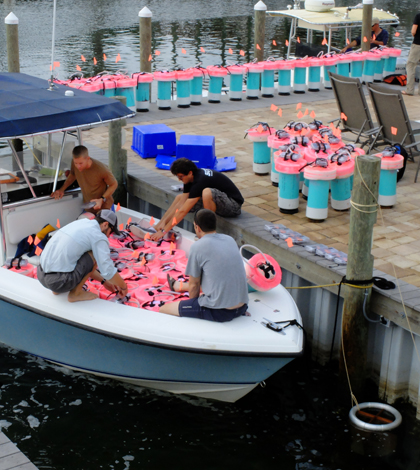 Loading up current-tracking GPS drifters for use in the Gulf of Mexico (Credit: Tamay Özgökmen)

When an explosion sank the Deepwater Horizon oil rig off the coast of Mississippi in April 2010, the well on the seafloor below gushed oil for 87 days without interruption. A cleanup response desperately attempted to contain the spill, but with limited knowledge of how quickly and where the oil might spread, the effort proved ineffective.

A new study, funded by the Gulf of Mexico Research Initiative, explores the role of small-scale ocean currents in dispersing pollutant clouds. Drawing from data gathered nearly two years to the day after the disaster, the research could help response coordinators address a future incident quicker and more efficiently.

“If there’s another oil spill, we are going to use the predictive model to tell us what will happen in the next day or week or month,” said Tamay Özgökmen, a professor at the University of Miami Rosenstiel School of Marine and Atmospheric Science. Özgökmen is also the director of the Consortium for Advanced Research on Transport of Hydrocarbon in the Environment, or CARTHE.

Özgökmen and other CARTHE scientists spent 21 days at sea conducting the Grand Lagrangian Deployment experiment, in which they deployed 300 custom-made drifters into the Gulf of Mexico near the site of the Deepwater spill. Each drifter carried a GPS transponder and transmitted location data to a satellite every five minutes. Tracking the drifters for six months, the researchers began to develop a model of oceanic flow based on their movements.

“We discovered that flows that are in between hundreds of meters to tens of kilometers are very, very influential in the initial spreading of pollutants,” Özgökmen said.\ The GLAD experiment was the largest of its kind, though Özgökmen says that a CARTHE experiment planned for 2016 could see deployments of up to 1,000 drifters. The study’s findings will not only assist in containing future oil spills, but other pollutant dispersion events as well, including nuclear disasters or biological contaminants.

Özgökmen pointed out that the predictive models are only one product of the study; the drifters themselves could play an important role in cleanup and containment efforts. In 2013, only a year after the initial research, 28 drifters were put to the test during an oil rig fire. Within 48 hours after the fire started, the researchers deployed the drifters and tracked current flow around the rig. Thankfully, there was no significant leakage, but the drifters’ capability was proven in real-time.

“Now we are pretty much convinced in the scientific community that if you have another oil spill, you can go there quickly and release drifters,” Özgökmen said. “It’s very practical, it’s doable, it’s useful for everybody, and it’s not expensive.” The drifters used in the GLAD experiment and the oil rig fire response cost around $1,000 per unit. Özgökmen said CARTHE is working on new drifters made of biodegradable wood and rubber that will cost only $300 to produce. They’re on their 10th version so far, and are considering fitting future versions with wind, temperature and salinity sensors.

CARTHE is one of 8 research teams funded by the Gulf of Mexico Research Initiative, a 10-year program started by BP to investigate the effects of oil spills on society and human health. “Working with the Initiative has been a positive experience, ” Özgökmen said. While university research is often conducted slowly over a period of years as funding allows, working with the Initiative is an “everyday activity” with the pace and pressure of a private company.

“Of course it’s very challenging, but it’s a great pleasure because there are so many scientists working toward a very clear goal,” Özgökmen said. “It makes it all worth it and it’s been great for scientists.”

“These are the type of things that you can only do in a large group. It’s not the kind of project you can do with one professor and one student at a university,” he said. “Therefore you need to have a dedicated source of funding for a long time to make progress, otherwise you just scratch the surface; you never crack the problem.