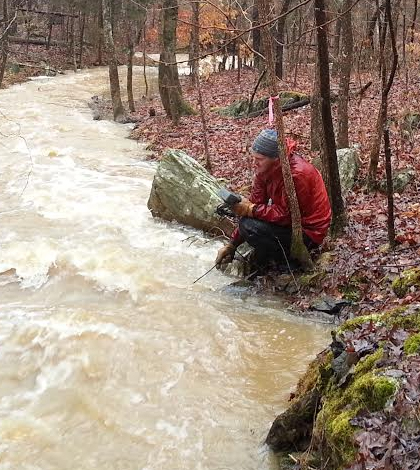 Soils in the Northern United States are relatively young compared to those to the south. This is thanks to the influence of glaciers, which receded only thousands of years ago to give soils in the region a chance to rebuild.

Because of this history, soils in the Duke Forest, a large-scale living laboratory that supports a lot of research at Duke University, are some of the oldest on Earth. By comparison, they are millions of years old, easily outpacing their counterparts to the north.

Perhaps unsurprisingly, these old soils, scientifically specified as ultisols (soils rich in red clay), hold a lot of mystery for researchers at the university. But that is also due to their intriguing influences on the ways water flows through the forest, its hydrology.

Studying in a portion of the Duke Forest near the Stoney Creek catchment, scientists led by Maggie Zimmer, a doctoral student in Duke’s Nicholas School of the Environment, have set out to chart the movement of water through the landscape. For the past three years, they have relied on sophisticated instrumentation throughout the surrounding watershed to track water from its entry as rainfall to its exit in flowing streams.

Researching the hydrology of the forest is important because of its location in North Carolina’s Piedmont region, which is heavily populated thanks to a strong research industry and the presence of major universities in addition to Duke, like Wake Forest University and nearby North Carolina State University. But beyond the effects its hydrology has on those living closeby, findings from the study could also have implications for other flat, forested landscapes across the world. “The majority of hydrological research has been focused in steep mountains and terrain, but there’s not a lot of knowledge about the hydrology in more shallow systems,” said Zimmer. “We would argue that more attention needs to be paid to these low-relief systems.”

She describes the streamflow monitoring network as Y-shaped, with the headwaters forming the top half and the downstream areas forming the bottom. Along these areas, Zimmer and others have installed 35 groundwater monitoring wells, ranging in depth from 25 centimeters to 10 meters. These all contain water level loggers to record water’s movement underground at 5-minute intervals.

On five other streams, there are other water level recording devices and conductivity meters, Zimmer says. YSI EXO sondes are deployed at several sites throughout the watershed and monitor stream parameters such as temperature, conductivity, turbidity, dissolved oxygen, pH, fluorescent dissolved organic matter and chlorophyll-a. This equipment logs data about every 15 minutes.

Throughout the region, tipping bucket rain gauges are used to measure precipitation, rounding out the scientific plan of attack that lets researchers track water from the first raindrop to the last discharge downstream.

“We also do storm sampling runs around the watershed and relate those to what’s occurring in the stream water,” said Zimmer. “So we track water particles as they fall, move over the land surface and then to the stream as they become streamflow.”

Over the course of the study, Zimmer says that there have been a few surprising revelations. For instance, she says that there is more runoff in one headwater catchment, when area-normalized, than in waterways downstream. This is likely due to the influence that the forest’s soils have. “We think that has to do with flow paths in the landscape, that there may be more in the headwaters than in the downstream system,” said Zimmer. Flow paths refer to the movement of groundwater, which she says can be inhibited by the clay-rich soils in the area.

“I think this is occurring because of the soil stratigraphy. These old systems are clay-rich and produce impeding layers in the ground, so water penetrates so far and then is stopped from penetrating in the soil profile,” said Zimmer. “A lot of watersheds have different perching layers, like bedrock. Watersheds across the world have these.”

The scientists have also made a related find, in the form of higher stream channel density throughout the catchment. In fact, their data show that the channel density in the study area is about three times greater than that calculated using information from the National Hydrography Dataset, a tool published by the U.S. Geological Survey.

Next steps for the researchers include looking at the effects that specific storm events have on the watershed and quantifying the importance of shallow flow paths to the area. From there, they will scale up their findings for application elsewhere.