In the Galapagos, scientists pioneer UAVs to count rare species and map habitat 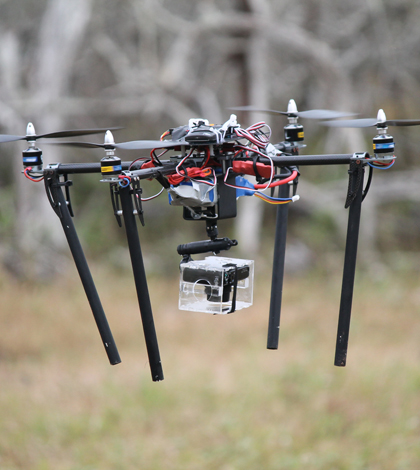 A quad-copter in flight during the Galapagos imaging expedition (Credit: Sean Burnett)

But getting to the some of the dozens of islands and islets of the equator-straddling archipelago can be tough for scientists. And the work doesn’t get easier once they’re ashore, according to James Gibbs, professor of vertebrate conservation biology at the State University of New York College of Environmental Science and Forestry.

“We’ve been doing a lot of monitoring and inventory work the old-fashioned way, which is getting out there with a machete, notebook and your legs and doing the best you can,” said Gibbs, who has been working in the Galapagos for 30 years.

To help conservationists cover more ground, Gibbs and his colleagues are pioneering the use of camera-equipped unmanned aerial vehicles in the Galapagos. A trip there in June made possible by the Galapagos National Park and Galapagos Conservancy showed them that despite some limitations, low-cost UAVs can fill an important niche in ecological and environmental monitoring, from counting albatrosses to mapping plant cover.

Gibbs was joined by Sean Burnett and Greg Carney, partners in a small enterprise called Wildlife Intel that had previously developed anti-poaching technology. Burnett, a health economist by training and data warehouse analytics specialist by trade, has also dabbled in electronics for more than a decade. He said when he began working on UAVs for this project in 2012, the technology was “just starting to get off the ground.” That meant it was often inaccessible and buggy — a conspicuous problem when a sensor error can knock a quad copter out of the sky. But since then, the sophistication and number of options of UAV platforms has skyrocketed, he said. He and the Wildlife Intel team assembled a package — the UAV platform, batteries, image processing hardware, a camera that could take crisp photos while jostling in flight — that they could test in the Galapagos.

For Burnett and Carney, who both live in British Columbia, that took 32 hours of flight before joining Gibbs for an 8-hour boat ride across rough seas. That gave them plenty of time to think about how the DIY electronics they were working with aren’t exactly rugged.

“The water was so choppy that in our bunks we’d actually get airborne a little coming down off some of the waves,” Burnett said. “The whole time you’re cringing that your copters are getting bashed around.”

They boated from the main island to the smaller islands they had targeted for their research and offloaded their electronics, a generator for charging UAV batteries, food, water and other supplies onto the shore. From there, they hiked across tough terrain carrying the supplies to the campsite, from which they’d break out on day hikes to do the aerial imaging. Greg Carney and a hexacopter in flight (Credit: Sean Burnett)

It was hard work, but this was no regular backcountry expedition. One of their study sites is the only island in the world where a particular albatross species in known to nest.

“It’s not just an exercise in machismo,” Gibbs said. “There’s a lot at stake here.”

Once they were settled, they learned that their concern for the delicacy of the electronics was justified. Of the five UAVs they hiked in, they salvaged three. At one point they splinted a broken frame with a stick. They also learned that the wind and hot, thin air over the islands would cut into the estimated flight time available for each battery charge, dropping it from 20 minutes to 10.

Despite those setbacks, they still completely imaged two islands: one with iguanas and one without. That will help further research on the influence of herbivores on engineering the environment in these ecosystems, Gibbs said. Beyond that, they demonstrated that UAVs can fill a niche between what scientists can see on the ground and what manned flights or satellites can see from the air.

They’re already able to identify animals and distinguish between saltbush and cactus in their imagery. As the technology improves, so too will its contribution to important research.

“With a bigger machine and better cameras we could actually do the first census of this highly endangered species of albatross, which would be a major service for conservation,” Gibbs said.