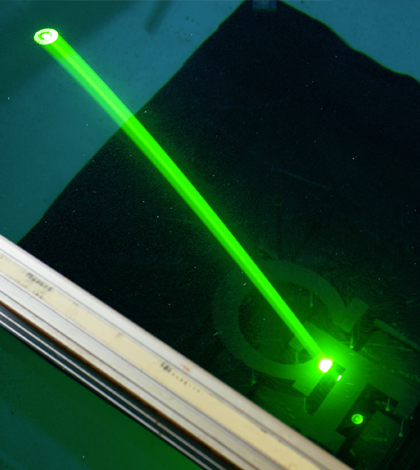 Lidar has been used extensively in research applications, from tracking cloud particles in the air to mapping soil on the ground. But there has been a consistent limitation to the technology: its size. Current lidar devices can only be deployed on big craft like airplanes and trucks.

But scientists at the Georgia Tech Research Institute are looking to scale down lidar devices, in a move they say will benefit researchers as well as military personnel. From the smaller platform, they are also working to integrate capability for real-time data collection. If successful, the smaller lidar platforms they develop will be able to take measurements in real time and be able to deploy on small craft like unmanned aerial vehicles.

“Our work at Georgia Tech will lead to UAV-deployable systems that can transmit important information, such as lidar point clouds, to the ground station while the aircraft is still flying,” said Grady Tuell, associate director of the Electro-Optical Systems Laboratory at Georgia Tech. “Or, if the lidar is deployed on a manned aircraft, the system operators have immediate access to the information.”

Tuell says that existing lidar systems are deployed on large turboprop-class aircraft, and the harvesting of data can really only begin after the plane has landed. That processing alone can take hours, days or even weeks.

With the sort of improvements the Georgia Tech team is looking to add, scientific investigations could reveal immediately whether or not a commercial expedition into an area is worth it. And for the military, the difference is real-time actionability. GTRI researchers use the lidar system to study the best methods for producing accurate images of objects on the pool floor. (Credit: Rob Felt)

“We reduce the time between collecting data and delivering actionable intelligence to the decision makers,” said Tuell.

This sort of capability makes the tech most ideal for mounting on unmanned aerial vehicles. But its size also makes it easier to install on manned aircraft. Still, the best feature is its accuracy, says Tuell.

“We solved the problem of estimating accuracy of a bathymetric lidar in real time,” said Tuell. “The thought leaders in that community at Navy, Army Corps of Engineers and NOAA have been asking for this type of error propagation for years. At GTRI, we decided to tackle it, and we upped the game by implementing it in real time.”

In lab tests, Tuell says that he and his team are able to compute about 37 million points per second. And the new approach they developed using statistics, calculus and algebra is helping them to reduce errors in individual measurements that often come from distance or changing angles.

Those improvements will aid future work to improve lidar technology. “We want to make images of the seafloor that enable automatic classification of seafloor type, and we want to estimate the concentrations of chlorophyll, CDOM, and sediment in the water column,” said Tuell. Those are difficult problems and solving them is a lofty goal. “My colleagues and I at Georgia Tech hope to accomplish some of these data fusion operations in real time as well. It’s exciting work.”