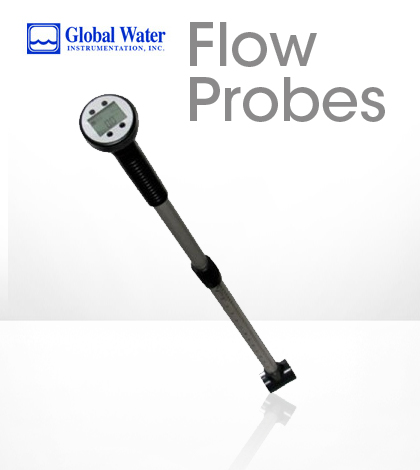 Standing in the middle of a waist-high stream, leaning against a steady current is the last place where one wants to be sorting out cumbersome equipment to take water velocity measurements.

The Global Water Flow Probe eliminates any in-stream complications with an integrated design to keep researchers measuring with ease.

Global Water was founded on a water velocity meter. Creator John Dickerman wanted to provide an all-in-one measuring system.  The latest result is a device users can simply dip it in the water and record velocity readings.

The instrument has no wires, headphones or controller boxes to connect.  There is just a probe at the bottom and a computer mounted on top.

The Global Water Flow Probe measures velocity based on the revolutions of a magnet attached to a small propeller. “Every time that magnet comes around it creates a pulse in a read switch and that is conveyed up to the computer,” said Schwartz.

Each reading is meant to act as a sample and not a measurement of the flow for the entire stream. Once a researcher compiles several average velocity readings from the stream, flow can be estimated by hand calculation.

The flow probe can also take velocity measurements in pipes and irrigation canals. The instrument can measure in streams as shallow as 2 inches deep.  A staff gauge printed on the side of the instrument shows the depth of measurements.

The onboard computer saves velocity readings, so users can take several measurements across a stream. “One of the nice features of the series we offer now is you can save up to 30 readings in the computer, so you don’t have to fumble with a notepad,” said Schwartz.

While the computer does not have a replaceable battery, the estimated life of the computer with typical usage is five years. A low battery warning light will alert users to dwindling power.

There are three versions of the Global Water Flow Probe designed to meet the needs of different measurement constraints.

Global Water’s FP111 is the standard flow probe with a telescoping handle that stretches from 3.5 feet to 6 feet. The FP211 has an extended reach from 5.5 feet to 15 feet, which can be handy when measuring off a boat or in deep water. The FP311 is a compact version, designed for those who have to hike in to measure a stream. It telescopes from 2.5 feet to 5.5 feet and compresses to easily be thrown over one’s shoulder with a supplied shoulder strap.

Schwartz said one option he recommends to users is the alignment fin for the flow probe. Once attached, the fin automatically orients itself with the current so users don’t have to guess on the orientation of the probe. This can especially help measurements in turbid water.

The instrument also has an optional swiveling head, for measuring flow in pipes and water intakes.

The Global Water Flow Probe starts at around $840.