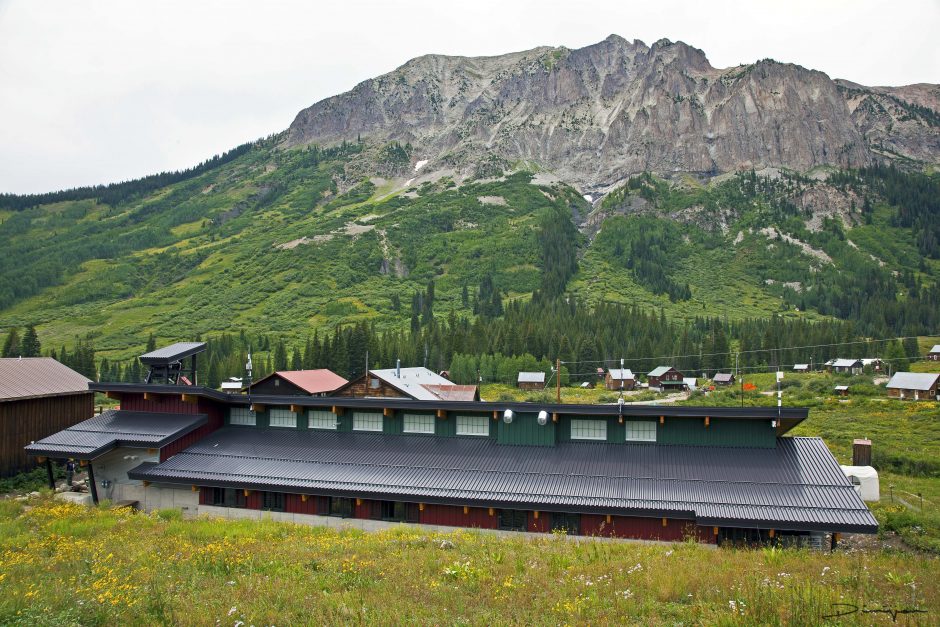 The facility in Gothic. (Credit: RMBL)

The Rocky Mountain Biological Laboratory (RMBL) has been a hotspot for a broad range of environmental variability. Perched near Gothic, Colorado, an old mining town, RMBL, affectionately known as “Rumble,” exposes scientists and students to mountain ecosystems at only 1160 meters’ elevation on the bottom of the Black Canyon, all the way to the top of Uncompahgre Peak, at 4360 meters.

Sitting pretty atop this natural theater for biodiversity is Executive Director and biologist Ian Billick. Dr. Billick spoke to EM about RMBL, some of their research projects, and what the biological field station is offering to the region and the scientific community.

Dr. Billick sees the emergence of the field station as part of the development of modern science.

“In the 1800s, a lot of what we would consider pure biology was taxonomy; think of the British navy or Charles Darwin collecting organisms and documenting diversity,” explains Dr. Billick. “Ecology, the study of how organisms interact with their environment, emerged in the 1910s, as people began to want to study organisms in their natural context, not just collect them and take them back to Kew Gardens or for the British Museum. Field stations really started to emerge in the western US in the 1910s and 1920s, and RMBL was founded in 1928, on the tail end of this emergence of ecology.”

Founded atop an old mining town, RMBL sits over what used to be a seam of valuable metals, but the true scientific value in the region springs from its diversity. 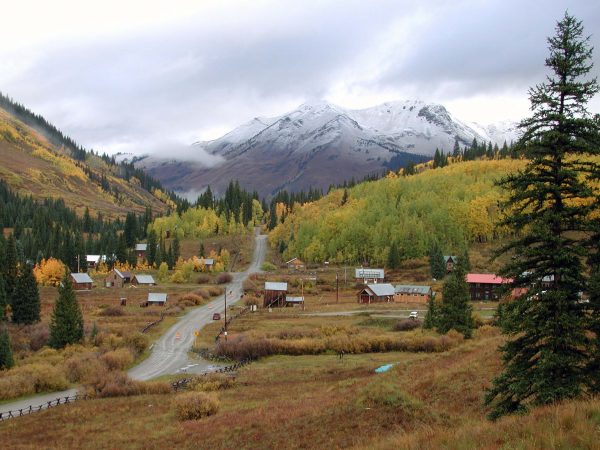 “In the late 1920s, Gothic offered one place where you could teach a mammology or botany course, and you could travel up and down this elevational gradient and show students so many different things,” states Dr. Billick. “Because it was an old abandoned mining town they didn’t have to spend a lot of money on buildings and laboratory space, they just moved into those old buildings. That’s how RMBL got started, and it began as a non-profit, so it’s always been run and operated by scientists.”

As science evolved in the 1950s and 1960s, a professional scientific class appeared—around the world, and at RMBL as well.

“In the 1950s, a cadre of hardcore Drosophila geneticists emerged,” details Dr. Billick. “Theodosius Dobzhansky, one of the founders of neo-Darwinian thought, spent time at RMBL. Many others did too through the late 1950s and early 1960s.”

After the Soviet Union sent Sputnik into space, the federal government pushed more money into sciences in the 1960s, and a large cohort of scientists started their professional careers in the early 1970s. 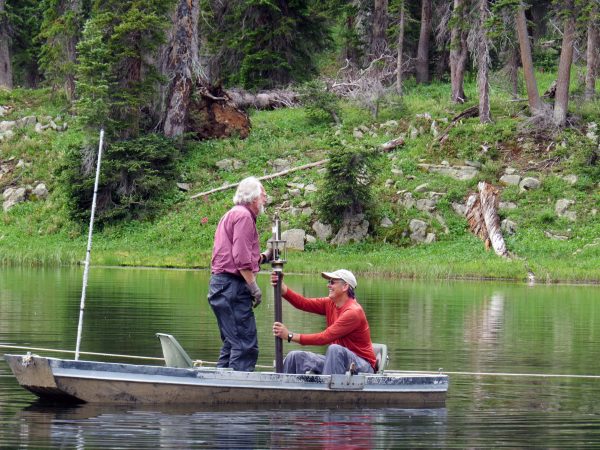 Coring on the water. (Credit: RMBL)

“We saw a lot of scientists start research programs, and these were kind of experimental programs often combined with long term monitoring,” says Dr. Billick. “For example, David Inouye started monitoring plant flowering times here in the early 1970s. Because it’s a beautiful location to which scientists are anxious to return to, we ended up becoming one of the centers for one of the largest collections of long term studies. What we see now is many scientists that come, often applying new techniques, whether it’s genomics or protein work, and embedding them within the context of these long term datasets.”

Like other large, active field stations, hundreds of researchers might be present at RMBL at any one time.

“We have about 250 scientists and students come through in a typical summer,” describes Dr. Billick. “Most of the biological systems are fully active in summer, and that’s when we get a lot of the students. So it’s sort of a combination of the academic schedule when the students are available and when the biological systems are active, that lead to that kind of intensive use in summer.”

This pace isn’t about to let up; the RMBL team won money to build new research laboratory space just over five years ago because of the interest in integrating long-term data with emerging laboratory techniques. 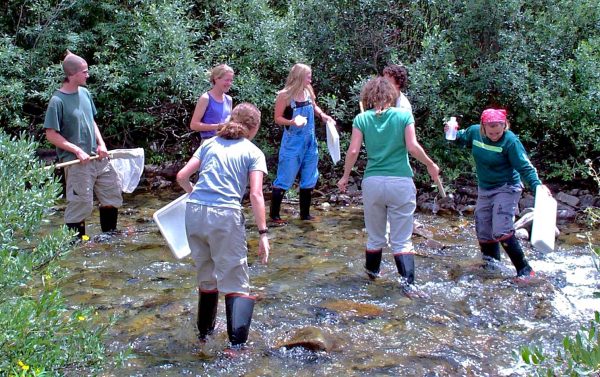 Students from a Stream Ecology course working near the field station. (Credit: RMBL)

In addition to their own pursuits, researchers and students at RMBL engage in community outreach.

“We have a visitor center that we run from early June into mid-September,” remarks Dr. Billick. “We do twice daily free tours, and we have about 15,000 people that will go through the visitor’s center each season. We had a day last summer when about 500 people went through in one day. We also have a number of programs that we do for our donors, paid tours in addition to the free tours, and students that write articles for the local newspaper.”

One of the greatest strengths a field station like RMBL offers the community is the dynamic combination of long-term data and new technologies and ideas. 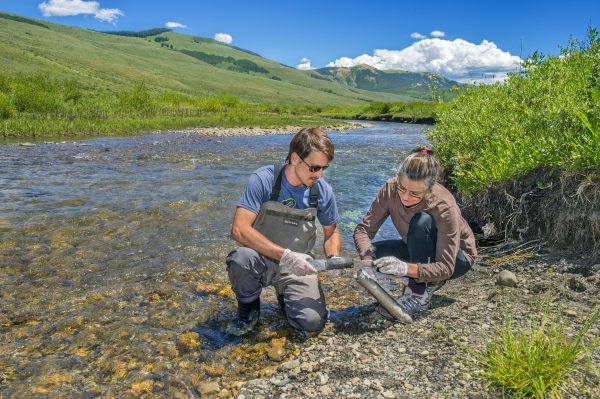 Coring in the river. (Credit: RMBL)

“With emerging technologies, genomics, and remote sensing, scientists from a lot of different disciplines can now ask questions out in the field that they couldn’t ask before,” explains Dr. Billick. “It’s opening up the kind of scientists that work at the Field Station. It’s going beyond just ecology and evolutionary biology to include medically-oriented scientists. Other researchers can take advantage of remote sensing. I think we’re kind of going through a change in field science.”

Dr. Billick should know. He came to RMBL as a student in 1988 and has observed major changes in the field since that time, such as the plummeting cost of genomic sequencing.

“We have one project where they are using natural variation in hundreds of thousands of plants to construct the genomes,” details Dr. Billick. “They break the chromosomes up into 50 different sections, and they put the plants out and measure everything about their phenotypes. The mechanics of constructing genomes from near-inbred lines, growing those in the greenhouse, putting them out in the field, being able to link phenotypic traits, and looking at genotype by environment interactions, these are techniques that people weren’t even thinking of ten years ago.”

Snow science and more advanced hydrology studies are finding their way to RMBL, including a NASA study.

“NASA has been developing radar-based approaches to measuring snowpack,” states Dr. Billick. “Historically, snowpack is measured at SNOTEL sites, where they measure the weight of the snow. To know how much water is in the snowpack, typically you weigh it, but running scales all winter long up in the high country is not a simple thing. There’s only a handful of places where they measure snowpack, but with climate change, snow accumulates in different ways at different times. NASA’s been doing flights in April and using radar to estimate the water content and snowpack. We’ve had scientists that come out and dig snow pits simultaneous with the NASA overflights so that they can validate the radar measurements that they’re getting and ideally use that to improve the forecast for water runoff and water availability on the Colorado River.” 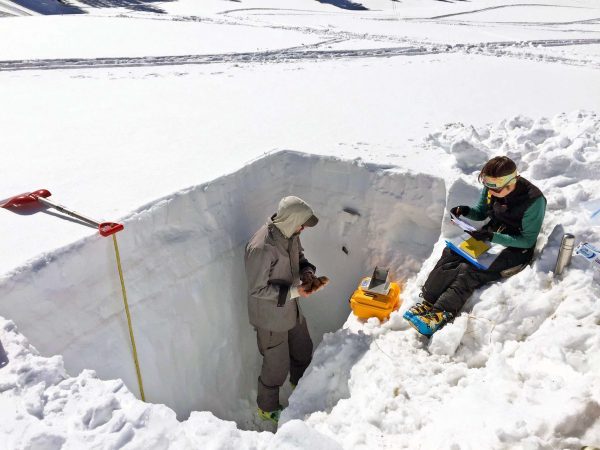 Isotope research is also starting to take off, and it’s bringing RMBL with it.

“We’ve got one project where they’re using isotopic signatures to look at the life cycle of a snowflake,” Dr. Billick describes. “You can determine how long it takes to go from being a snowflake to showing up in a river. Across the board, there are all of these crazy new techniques that can be applied in the field, so there are a lot of scientific disciplines that would benefit from asking questions and running experiments or collecting data in a natural environmental context. They just haven’t had the power to observe those processes before.”

This process creates what Dr. Billick calls a “virtuous cycle.” 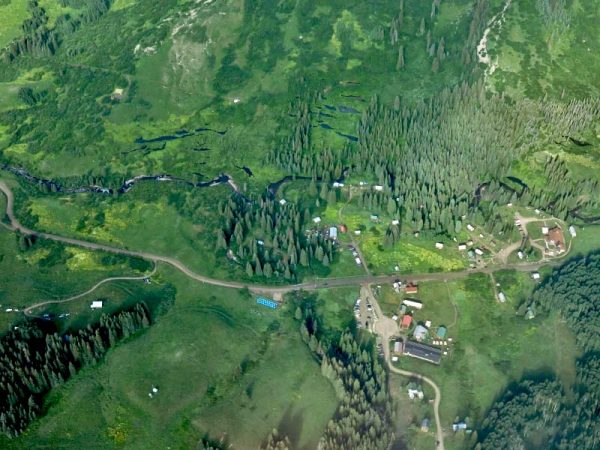 A bird’s eye view of the townsite. (Credit: RMBL)

“Last year we saw two or three different projects talking about machine learning; I’d never seen a field scientist talking about applying machine learning techniques,” comments Dr. Billick. “I think we’re developing techniques that allow synthesis and integration of data, coming to us from other disciplines, just like the genomics are developed in different contexts that have applications in field science. We’re seeing the same thing on the informatics side. I think it’s a convergence of these different things that’s allowing field science to blossom.”

Of course, although specific discoveries might be surprising to Dr. Billick, the idea that field stations foster innovation certainly isn’t.

“Field stations are often a location for innovation on sensing techniques,” Dr. Billick remarks. “Scientists are often pushing the envelope. Many science advances are based upon developing new ways to see and measure things. From the monitoring side, often the equipment or techniques that people are employing were originally developed within a field station context.”