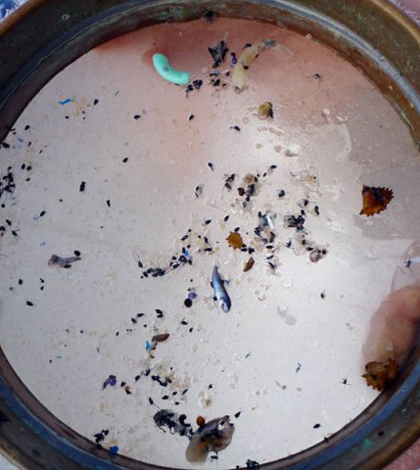 For city dwellers around the Great Lakes that don’t put much thought into their morning routines,  new research suggests they should think twice about what’s in the products they’re using in the shower.

Sherri Mason, an associate professor of chemistry at the State University of New York at Fredonia, has been on a mission to track pollution in the Great Lakes over the past year. And her findings are surprising: The Great Lakes are contaminated by plastic pollution, most of which stems from the use of everyday products.

Sherri Mason got the idea to study Great Lakes plastic pollution in 2011 while considering the Great Pacific Garbage Patch, a wide section in the central North Pacific Ocean with a high concentration of plastic debris.

“The Great Lakes are quite breathtaking and beautiful, and just looking at the water, they look clean and pristine, and sometimes that can be deceiving,” Mason said. “And so that’s when I thought, ‘I wonder if anyone has really looked for plastics in the Great Lakes,’ and much to my surprise, nobody really had, in the open waters especially.”

This July, Mason and a team of students from the University at Buffalo launched a seven-day research endeavor to study Lake Ontario aboard the Sea Dragon—a 72-foot yacht. Mason set out on the Sea Dragon with University of Buffalo students to survey plastic pollution on Lake Ontario (Credit: Asta Mail/Pangaea Explorations)

Outfitted with a debris-collecting device known as a manta-trawl, which is dragged from the side of the boat along the water’s surface, the researchers collected lake debris that was larger than a third of a millimeter in diameter.

The manta-trawl, which looks something like a manta ray, coasts along the water’s surface on metal fins while its mouth siphons water into a net that catches debris. Researchers then take the collected debris and examine it on a microscopic level in a lab.

Although Mason is still waiting to formally examine the debris collected from Lake Ontario in the University at Buffalo expedition, it appears similar to what has been showing up in the manta-trawl’s filter since Mason started studying the Great Lakes.

“Most of the plastics [we found] were microplastics, and predominant within the microplastic category, were microbeads,” Mason said. “So these are perfectly spherical plastic particles where microscopic analysis would indicate that they are coming from particular consumer products such as facial washes, toothpastes and bodywashes.” Among the common forms of plastic pollution were microbeads that come from face and body washes (Credit: Asta Mail/Pangaea Explorations)

These brightly colored microbeads are likely familiar to everyone who has stepped foot in a supermarket within the last decade, but their impact on the environment is just now being realized.

These plastics pose a serious threat because they aren’t biodegradable and are toxic to both humans and animals. Researchers fear that because fish and birds often mistake the microbeads for food, they could be unknowingly passed through the food chain.

Documenting that microplastic pollution is a problem in the Great Lakes is the first step in Mason’s research. The next phase of her study aims to fully understand how these plastics might affect our environment.

“The next phase is microplastics ending up in the food chain. So we’re going to be looking at fish, but also filter feeders like plankton, algae, quagga mussels, zebra mussels—things that filter this water and might be retaining these plastics as part of this process.”

In light of Mason’s research, several large pharmaceutical and cosmetic manufacturers are phasing out microbeads in their products over the next several years.