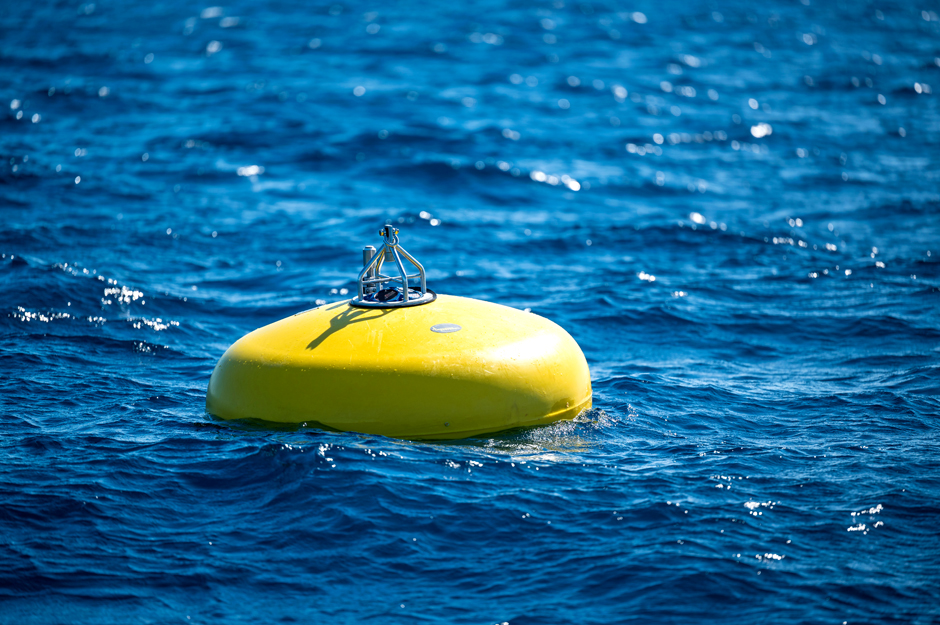 Seen here at the surface, this buoy will collect data 100 meters below the surface. (Credit: John McCord/Coastal Studies Institute)

The Gulf Stream, the massive western boundary current off the east coast of North America, moves water from the Gulf of Mexico north and west across the Atlantic Ocean. There’s a lot of energy in that much moving water and researchers are trying to put it to use.

Although the Gulf Stream’s path shifts (researchers say it acts like a wiggling garden hose), in a couple of spots, it stays relatively stable. At one such spot off the coast of Cape Hatteras, North Carolina, researchers have dropped moorings and research instruments to study the current with the eventual goal of harnessing it for renewable energy.

A recently deployed mooring, subsurface buoy, and other monitoring instruments collect measurements that characterize the current and identify oceanic water masses in the area, key information in long-term renewable energy goals. Mike Muglia, an assistant research professor at East Carolina University’s Coastal Studies Institute in Wanchese, North Carolina, was part of the team that deployed a highly collaborative suite of instruments in October.

The October deployment is just a recent step in a long string of monitoring operations off the coast of Cape Hatteras, said Muglia, who is also the assistant director of the North Carolina Renewable Ocean Energy Program (NCROEP). NCROEP is a multi-institutional, state government-supported effort to harness the Gulf Stream for renewable energy. It is housed at the Coastal Studies Institute in Wanchese.

The deployed buoy is a subsurface buoy in development by the National Oceanic and Atmospheric Administration’s Ocean Systems Testing and Evaluation Program (OSTEP) team led by Robert Heitsenrether. Muglia’s team deployed CTDs—which measure conductivity, temperature and pressure (depth)—at their locations in the water column. They placed one at the buoy, 100 meters below the surface; another 165 meters deep; and one at the bottom-mooring 250 meters deep. The measurements gathered by the three CTDs will help the researchers identify the different water masses present at that location.

Cape Hatteras is a unique location because several different water masses, some from thousands of miles away, come together there. 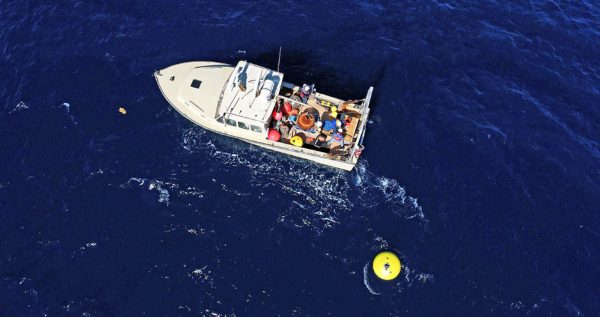 This buoy, seen here during its October deployment, will gather information on the Gulf Stream for a year. (Credit: John McCord/Coastal Studies Institute)

The team is also using acoustic doppler current profilers that can measure current throughout the entire water column. One is on the bottom mooring and the other is on the subsurface buoy 100 m below the sea surface.

Understanding the characteristics of the water column, the water masses present and both shallow and deeper currents is important information for harnessing the Gulf Stream for renewable energy. Click To Tweet

Any moorings or anchors for an energy-generating structure would need to withstand currents that change speed and even direction at different depths, Muglia said. Different water masses moving in different directions at different speeds can put a lot of strain on a mooring.

A collaborative effort from the start

This isn’t the first time Muglia has collaborated with OSTEP on a buoy deployment. Collaboration provides OSTEP with an opportunity to test their equipment in a suitable area he knows well and provides Muglia’s team with oceanographic information like current velocity, temperature, and salinity in their focus area for Gulf Stream energy.

OSTEP researches and develops measurement systems for oceanographic purposes. The buoy deployed in October “measure[s] currents in a deep-water, high-current environment,” according to the Coastal Studies Institute’s announcement of the project.

The acoustic doppler current profiler his team deployed measures current with a resolution of four meters up to about forty meters below the surface every 10 minutes, Muglia said.

OSTEP’s buoy will measure the water column at a much finer resolution: about one meter. The two current measuring systems will nicely complement each other, he said.

This is the second attempt at testing similar equipment after the first attempt didn’t capture a full year of data.

Two other devices are attached to the buoy mooring, Muglia said.

Lindsay Dubbs, Muglia’s colleague at the Coastal Studies Institute, attached a passive acoustic hydrophone, which listens for marine animals. Understanding what animals are in the area will be necessary information in any future permitting process for an energy-generating structure. The hydrophone observations are part of the team’s effort to understand potential environmental impacts of these structures and attempt to mitigate them.

Joy Young, of Florida Atlantic Coastal Telemetry, contributed an acoustic receiver to the subsurface buoy, which will note the presence of tagged fish. For some animals, the Cape Hatteras area acts as a north or south boundary for their range. 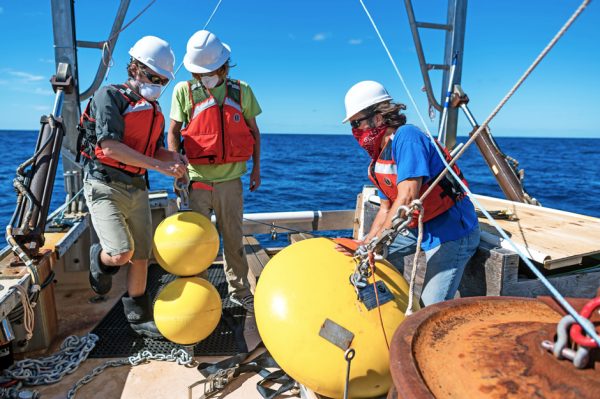 Making progress towards a goal

Muglia’s group has been studying this area for seven or eight years, he said. The research is in service of the ultimate goal of harvesting renewable energy from the Gulf Stream. Making that a reality is going to rely on more than good research.

When exactly North Carolinians might have Gulf Stream electricity keeping the lights on and charging their phone is “more of a political question,” Muglia wrote in a follow-up email.

North Carolina is one of the only states that has dedicated money to developing ocean current energy. At this point, it’s strictly for research and development. Lake Worth, Florida, will likely be the first place the Gulf Stream is harnessed for electricity.

“After demonstrating success there, Cape Hatteras is the next likely place to consider,” Muglia wrote.

NCROEP will test an underwater kite being developed by Chris Vermillion’s research team at North Carolina State University that could be used in the Gulf Stream later this year. They’ll tow it behind a boat in an inland lake, a step toward testing something in the ocean current.

“I’d dare to speculate that we could test something small scale there in 5 years,” Muglia wrote.

Before any permanent turbine could be set in the Gulf Stream, questions of funding and permitting will have to be answered. Data generated from this most recent deployment of instruments could help answer them.