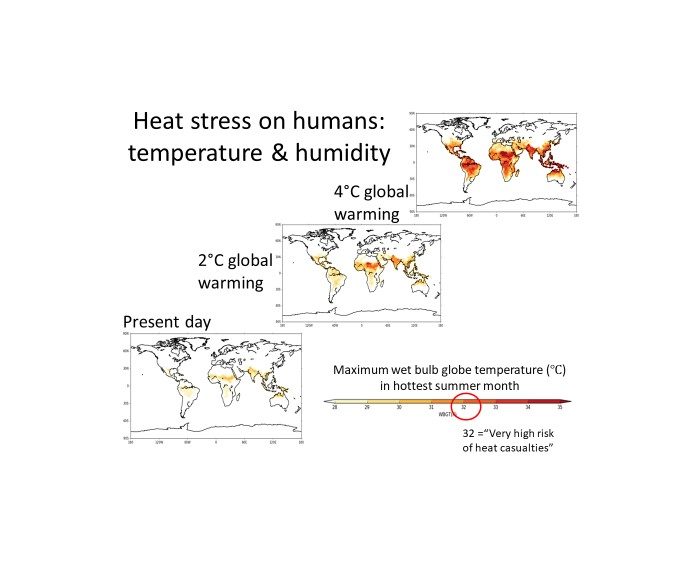 A question that comes up often in climate change discussions is: if we accept the global climate change data scientists all over the world have generated, which shows that our planet is warming and it’s a huge, irreversible trend, does it matter what we do from this point on? Is our fate sealed, or can we still mitigate the effects of global warming in the future by changing our behavior today? The High-End cLimate Impacts and eXtremes (HELIX) project undertaken by 50 scientists in 13 countries provides some insight on what we can still do and what we can’t, with respect to climate change in the future all over the planet.

Richard Betts, Chair in Climate Impacts at the University of Exeter, led the HELIX project. The vast amount of information gathered in the course of the project suggests to him that some global warming changes are locked in and can no longer be altered, but others could still be influenced for the better. “In terms of temperature rise, we have already seen a global temperature rise of around one degree Celsius, and another few tenths of a degree are already locked-in. There isn’t anything we can do about that at this point. This means that we are going to see sea level rise continue and glaciers continue to melt. We have not yet felt the full impact of these inevitable changes, but they are happening and more are on the way,” says Betts. “However, if we act to reduce emissions now, we may be able to avoid the two degree or higher rise in temperature that are likely to happen if we don’t change anything, and we may be able to save some glacier and coastlines, but only if we manage to globally curb emissions in the very near future.”

Betts warns that some areas of the Tropics may become so warm as to be intolerable to live in, and sensitive living structures such as the Great Barrier Reef, already suffering massive coral bleaching events in large areas due to warming, may be unable to recover. “Coral reefs are among the most imminently threatened ecosystems,” says Betts. “Not only through warming but also the direct effects of carbon dioxide causing ocean acidification, which makes it harder for corals to produce the calcium they need for their bodies.”

The HELIX project used many computer models to simulate the impact of potential rises in temperature and changes in rainfall patterns that could occur in the future depending on actions we take, or don’t take, to curb climate change. Simulations of the effects at global warming of 1.5, 2, 4 and 6 degrees Celsius rise were performed. Climate models included models of water flow in oceans and weather forecasts that incorporated how wind flows around the Earth.  Changes of water from liquid to ice to gas were also included, as well as the effect of the sun’s energy on Earth. “There were millions of lines of code used to describe climate behaviors incorporated in the model,” Betts explains. “These are gigantic programs.”

Models used in the HELIX program can simulate decades, even hundreds of years’ worth of climate behavior. Models like these are tested against a vast array of data, including information from weather stations, weather balloons, weather data from aircraft, and are used to understand causes of global weather trends. Both climate and impact models were used, and these are process-based. They are then used to provide inputs to economic impact models. For example, climate and river models show how much precipitation might occur and where the water is likely to go, but when equations for vegetation and crops are included, the impact of the precipitation and water flow on meaningful economic variables like expected crop production can be estimated. Much of the data used in climate modeling comes from North American and European sources, as lots of scientific data is gathered on the ground in these areas. High population areas tend to result in more data than low population regions. Data inputs also depend on what kind of information is available. There is around 100 years’ worth of sea temperature data from shipping the North Atlantic, but global satellite data only became available in recent decades. Data gathered by amateur naturalists has also been repurposed to indicate changes in the natural world which can be compared against model simulations.

The three main regions of the globe HELIX tried to capture were: 1) Europe; 2) Africa, from the West Coast to the Horn, including Senegal, Nigeria, and Chad; and 3) India, especially the region around the Ganges, and Bangladesh.

“We looked at river and sea level impacts on the Bangladesh population using our models,” Betts mentions. “We anticipate they will be significantly affected as sea levels continue to rise. As the population continues to rise also, even more people will be affected. They could be looking at as much as a half-meter sea level rise even if emissions are reduced soon, and larger rises if emissions continue.”

Although the HELIX project tells us that it is too late to change some global warming impacts, there is still hope.

“Bangladesh could respond by improving its flood management, and the country is proactive in responding to the climate change challenge,” says Betts. “All over the globe, we should work to adapt to the inevitable changes our research says are going to happen, even though we still hope to minimize the risk of the worst impacts by halting the rise in greenhouse gas concentrations.”