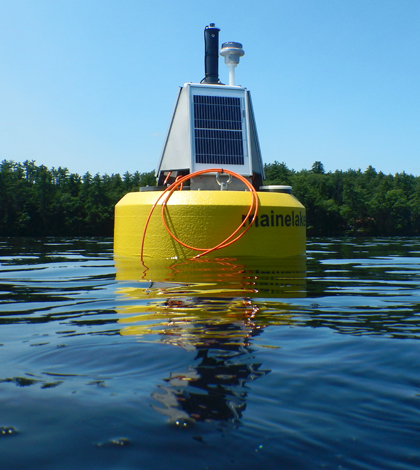 The Lakes Environmental Association tests water quality on around 40 lakes in western Maine,but singled out Highland Lake for a new data buoy in the midst of its first field season.

When money from an anonymous grant made the buoy a possibility, the nonprofit LEA picked Highland Lake in part for its active community of residents who already keep an eye on the lake and want to know what’s going on there. That choice paid off when the people around the lake donated enough extra funds to cover six additional oxygen sensors to track hypoxia throughout the water column.

“People came through for us,” said Colin Holme LEA’s assistant director. “It was great to get those on there. It’s really made a big difference in the level of information we can delve into.”

That information, which includes measurements every fifteen minutes of dissolved oxygen, photosynthetically active radiation, chlorophyll and a temperature profile, will help answer long-held questions about the lake’s stratification and how that ties into hypoxia and phosphorous recycling.

Holme said the lake has seen water quality problems, including a bloom that covered a significant portion of the lake in 2002. That might seem like a long time ago, but this is Maine, where lake managers take water clarity very seriously. That bloom reduced the lake’s normal visibility of 6 or 7 meters down to about a foot, Holme said.

Since then, the lake’s minders have hoped to learn more about its thermal structure, particularly whether the stratified layers that form during the summer break up periodically. That’s a concern because the water at the lake bottom could be growing anoxic, which triggers biochemical reactions that release sediment-bound phosphorous into the water column. If stratification breaks down in the summer, that recycled phosphorous could be mixed up to the surface where it could fuel algae growth. The buoy is only a few months in to its first season on Highland Lake, but the data are offering some insights into stratification patterns.

“We’ve already seen some things that we weren’t aware of — how quickly it formed and how it’s starting to break down much earlier than we thought,” Holme said.

The hope is that the buoy will also serve as something of a public relations tool, especially once they’ve got the data up on a public website. Helping the community understand those numbers and what they mean for the lake could be a challenge, but residents are clearly interested. Holme said he already has people stopping by and asking questions when he’s out calibrating the instruments.

But that’s what you can expect from people in Maine, which Holme said is very much as state that values its natural resources, and especially lakes.

“Maine is synonymous with clean, clear water,” he said. “People come here to fish and to swim and to boat and to recreate, so there’s a ton of interest in preserving that ideal.” The LEA hopes data from the buoy will reveal characteristics of the lake’s stratification patterns. (Credit: Lakes Environmental Association)