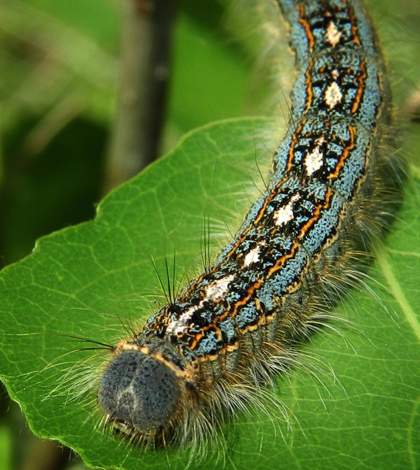 With as much swatting and swearing as insects endure on a daily basis simply for their presence, it might seem unfair to blame bugs for yet another problem. But while our consciences reel from that last squashed beetle, peer-reviewed research dishes some guiltless dirt of global proportions on the six-legged creatures populating woodland canopies.

A new study from the University of Wisconsin-Madison shows that leaf-eating insects could reduce the capacity of forests to sequester atmospheric carbon dioxide and mitigate damage from anthropogenic climate change. Published online in Nature Plants, the study is one of the largest and most comprehensive to examine the impacts of carbon dioxide and ozone in natural forest stands.

“Everything you can imagine was instrumented,” said Rick Lindroth, lead author of the study and professor of ecology at UW-Madison. “At some point there were 70-something PhD-level scientists working in the site from around the world and across the nation. Everybody was taking advantage of a very expensive infrastructure to answer questions that can’t be adequately addressed in a greenhouse or potted tree study.”

The study found that forest canopies exposed to increased levels of carbon dioxide sustained more than 80 percent higher damage from insects than canopies in normal conditions. Because plants grown under greater exposure to carbon dioxide produce fewer proteins and more starches, the researchers hypothesize that insects consume more leaves in high-CO2 environments to compensate for absent nutrients. In doing so, they can reduce trees’ ability to take up atmospheric carbon.

When the project began in the late 1990s, it focused not on bugs, but on the effects CO2 and ozone imparted on northern temperate forest growth. Conducting such a study in natural settings required a vast infrastructure, so the research team — which included funding and manpower from a wide array of academic and federal sources — spent years building a network of 12 forest stands across a 60-acre site.

Known as a free-air carbon dioxide and ozone enrichment, or FACE experiment, the stands were encircled by gas-distributing rings that would simulate atmospheric conditions predicted for 2050. Although Wisconsin observes a rather short growing season of about 100 days, the cost of CO2 for each season alone amounted to about half a million dollars. The stands were divided into three forest compositions based on the seedlings planted within: aspen-maple, aspen-birch and a mixed aspen genotype. The aspen-maple stands didn’t keep pace with their neighbors, however, as they faced unwanted attention from hungry rabbits.

“We had to put up extensive fencing and we had hunting drives and all kinds of things to cull rabbits, because they just love munching on those little maple trees,” Lindroth said. Ultimately, their efforts wouldn’t be enough to preserve the stands.

Over the course of the study, the researchers found that forest stands exposed to 2050 levels of CO2 grew bigger faster than stands at ambient CO2 levels. Those exposed to ozone grew slower, while stands receiving both developed at about the same rate as stands at ambient conditions, suggesting that CO2 and ozone cancel out the effects of one another in temperate settings.

In addition to observing growth, the researchers collected thousands upon thousands of leaves from the canopies during each growing season. Scanning the partially chewed leaves with a flatbed scanner, the researchers employed advanced software to recreate the original leaf shape and calculate the missing portion. By this painstaking method, they were able to determine that insects eat more leaves in temperate forest environments exposed to greater levels of CO2.

It’s already known that insect population densities tend to be higher in CO2-rich environments. The lack of protein in the leaves there pushes the insects to consume more, resulting in a one-two punch to the trees, and a positive feedback loop in the carbon cycle. But though the insects seem to have a negative impact on temperate forests’ ability to mitigate greenhouse gases, Lindroth says the study by no means recommends any backlash against the bugs.

“Insects are part of our forest ecosystem, they do all kinds of important work,” he said. “These are a wide diversity of insects, all kinds of species; only a few of them would we consider pests.”

The study concluded in 2008 after the Department of Energy shut off funding to many of its ongoing projects. Lindroth says the study is unparalleled in scale, but warns against treating the findings as the final word on insects’ impact around the world.

“This was the first study to be done at this scale, at this level of complexity,” Lindroth said. “It’s indeed the best work that’s been done, but that doesn’t mean it’s perfect by any stretch of the imagination. Nor should we try to extrapolate from this study what is going to happen to forests across the globe.”

“What we’re arguing is that this is kind of a heads-up,” he said. “We need to start paying attention to the world of insects in the equation.”