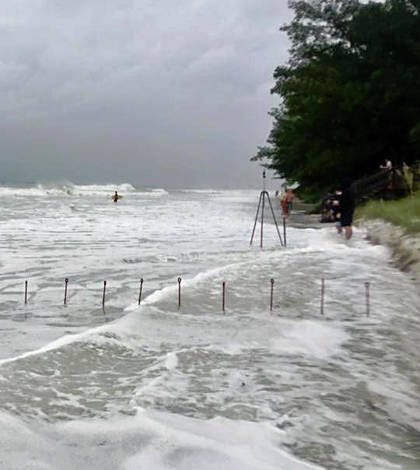 As Hurricane Hermine developed in the Gulf of Mexico and moved to the northeast, massive storms crossed parts of Florida and other states along the eastern seaboard. U.S. Geological Survey (USGS) scientists in eight states responded to the sudden development, using many different techniques to forecast and track coastal flooding.

During the storm, these sensors recorded the precise time the tide arrived, the depth of the tide throughout, wave height and frequency, changes to inland and ocean water levels and the time it takes for waters to recede. That information is useful to the National Oceanic and Atmospheric Administration and other agencies responding to storm surges and coastal flooding. The data also help scientists develop more accurate storm-tide models, which help to improve flood predictions ahead of storms.

A few hours before Hurricane Hermine struck Florida’s Big Bend around 1 a.m. Friday, Sept. 2, USGS scientists were out installing storm-tide sensors and barometric pressure monitoring devices from Apalachicola to Cedar Key. Working late into the evening on Sept. 1 as tropical storm force winds began reaching the coast, USGS teams installed the storm-tide sensors, which are housed in vented steel pipes a few inches wide and about a foot long, on bridges, piers, and other structures. One reading from a permanent USGS streamgage at the mouth of Florida’s Aucilla River, near where Hermine made landfall at St. Marks, showed a storm surge of about 6 feet above normal high tide. The figure lined up well with what forecasters had predicted.

The Tampa Bay region was also hard hit, as the storm’s rain bands lingered there for three days, dumping more than 16 inches of rain that resulted in moderate to high flooding. Data gathered from existing streamgages let scientists reconstruct every moment of flooding to visualize how high waters interact with bays, estuaries and streams as well as local topography.

But another intensive info-gathering effort was underway further up the Atlantic coast on Friday and Saturday. More than 65 storm-surge and barometric pressure sensors were deployed by USGS researchers from Lewes, Del. to Cape Cod, Mass.

The locations for these sensors were selected from among a network of 763 sites that have been prepared in advance to receive the rapid deployment devices. The network, set up in 2014, dramatically decreases the time it takes to provide federal agencies with the data they need to tailor flood response and recovery efforts.

Tracking beach erosion took a slightly different approach, as agency researchers had to deal with shifting sands that can mean their gear is more likely to get washed away. To get around that issue, USGS scientists have designed an experimental system for housing storm-tide instrumentation inside steel pipes that can be driven into the sand deeply enough that they may outlast the storm. The scientists placed a row of the experimental devices on Chincoteague Island’s beach once it seemed likely Hurricane Hermine might affect Virginia’s Eastern Shore.