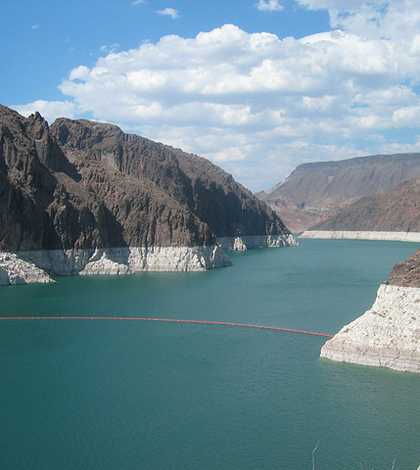 The lake’s surface is generally more contaminated. Davis said the lower intake is used to draw clean water until surface contaminates sink.  The water authority then switches to the upper intake to keep drawing the cleanest water possible.

The water authority also spearheaded restoration of the Las Vegas Wash, an area of land that carries natural streams, waste water effluent and runoff from the city into Lake Mead.

In the 1960s, runoff from the city developed into a wetland in the wash.  As Las Vegas, grew so did runoff. This eventually overwhelmed the wetlands and created a channel into the lake.  “Ironically the wetland died from too much water,” Davis said.

Combined efforts have led to improved water quality in Lake Mead. Davis said drinking water quality has never been a problem, but, “The better surface waters you can start with, the better off the community is.”

Lake Mead is monitored heavily by a variety of federal organizations including the U.S. Geological Survey and the Environmental Protection Agency.

Check out the USGS documentary below to see more on historical water quality improvements of Lake Mead and one of the USGS floating monitoring stations.