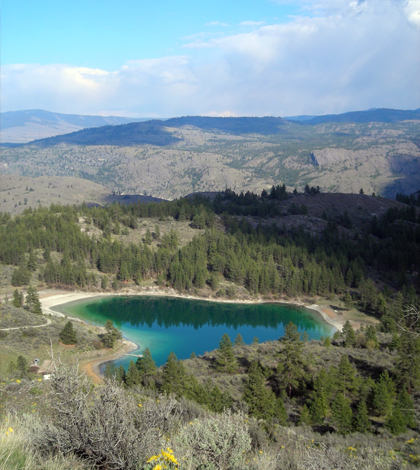 A common method used in studying lakes is sediment core analysis. But sometimes assessing cores isn’t as straightforward as researchers would like, with inaccuracies coming into play when they begin to inspect geochemical changes evident in core records.

But as with a lot of studies into lakes and their pasts, scientists are always working to make their methods for studying these valuable bodies of water more reliable. In one example of this, researchers at the University of Minnesota’s Large Lakes Observatory have instrumented a couple of lakes in Washington state with Solinst Levelogger Edge Water Level Loggers and other sensors that they hope can yield findings that will one day illuminate their understanding of the changes lakes undergo over time.

The two lakes of interest are Castor Lake and Scanlon Lake, both alkaline water bodies sitting above the Lime Belt in Okanogan County. This area is in north-central Washington.

“We are studying modern lake-catchment hydrologic and isotopic responses to seasonal changes in precipitation and evaporation. This information will help us to better interpret lake sediment records of past hydroclimate change,” said Byron Steinman, assistant professor in the Department of Earth and Environmental Sciences. “Both Castor and Scanlon Lake sediments contain abundant authigenic calcium carbonate that we have analyzed to produce paleo records of oxygen isotope variability spanning the Holocene.”

His hope for monitoring the lakes, which includes tracking surface water temperatures, lake levels and groundwater elevation changes with the help of some shallow wells surrounding them, is to make it easier for himself and other scientists to interpret the geochemical changes that are recorded in lake sediment records.

Steinman and his students have been venturing out at least once a year to download data gathered by the leveloggers and other instruments around the two lakes.

“We have a 10-year continuous dataset now that is pretty cool,” said Steinman.

As for what the data show, a little analysis is underway to uncover findings for some of the more recent years. But there have been a few surprises over the course of the investigation.

In the future, Steinman plans on publishing those and other results in peer-reviewed journals like Limnology and Oceanography, Geochimica, PNAS and Quaternary Science Reviews.

“We anticipate developing a better, more quantitative understanding of how small, closed-basin lakes in the Pacific Northwest respond to seasonality and climate change,” said Steinman.