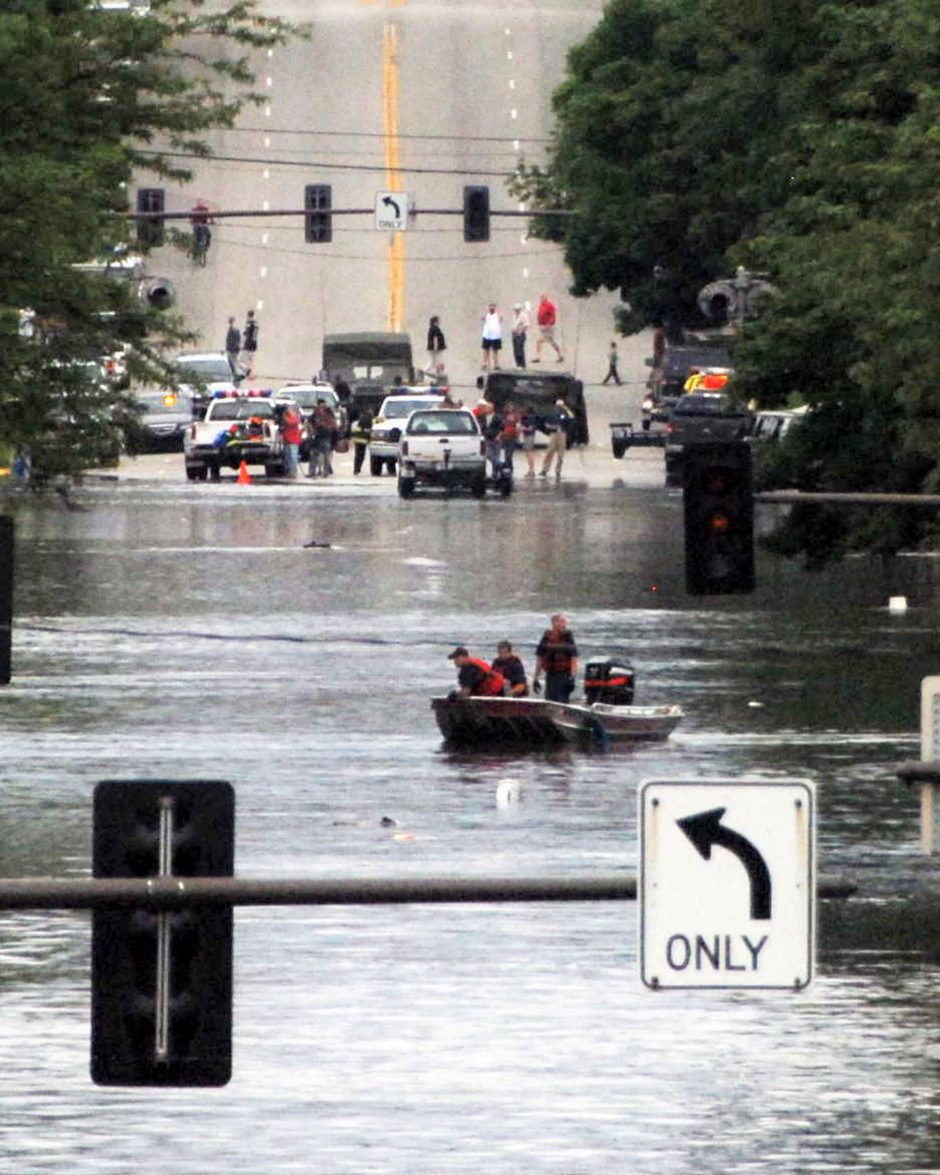 Coastal regions often come to mind when we think of flooding, but Iowa is home to a large number of floodplains. In fact, as a fairly flat state that’s home to many rivers, Iowa is no stranger to even very serious flood events like the one that took place in summer of 2008. Toward the beginning of June 2008, rains fed the rivers until, by the start of July, most of the state’s eastern rivers were involved in a massive flood event.

Homes were evacuated, Amtrak service and freight train traffic were interrupted. Approximately $3 billion in damage to crops was sustained in the state, and then President George W. Bush visited the state and declared most of it a disaster.

Since that time, various projects to reduce flood risk have come to fruition in Iowa, among them the Iowa Watershed Approach (IWA). This $96.9 million project is a statewide effort, aimed at both flood reduction and water quality improvement. Currently there are nine watersheds in Iowa participating in the project, which started in 2016. Project coordinator John Rathbun corresponded with EM about the initiative.

“We are in the second of a five year program, ending in the fall of 2021,” explains Rathbun. “In January 2016, Iowa was one of several grant winners of the National Disaster Resilience Competition made available through the U.S. Department of Housing and Urban Development (HUD).”

The Iowa legislature authorized the formation of Watershed Management Authorities (WMAs) in 2010 as a mechanism to foster cooperation across governmental boundaries; the first WMA was organized in 2012. The Clear Creek Watershed Coalition in Iowa and Johnson counties formed in 2015 to help government entities and other stakeholders work together in watershed planning and management, and it is one of the nine participants in the program.

“As part of the Iowa Watershed Approach we have six specific goals: 1) reduce flood risk; 2) improve water quality; 3) increase resilience; 4) engage stakeholders through collaboration and outreach/education; 5) improve quality of life and health, especially for vulnerable populations; and 6) develop a program that is scalable and replicable throughout the Midwest and the United States,” details Rathbun.

They achieve these goals by putting a variety of tactics to work in their service, and by helping landowners within portions of the Clear Creek Watershed to implement both in-field and edge-of-field conservation practices. The result is less potential for flooding, and lower nutrient levels in surface water. “The IWA builds on the Iowa Watersheds Project, which ended in 2016,” adds Rathbun. “The Soap Creek Watershed Project was a part of that project and has realized significant reductions in peak flow during heavy rain events.”

Keeping a technical eye on water

Rathbun helps landowners with conservation work in the watershed so when the state monitors progress, it’s clear that the program is working.

“A dense instrumentation network of stream sensors, hydrologic stations, and water quality sensors provides valuable data for each of the participating IWA watersheds,” explains Rathbun. “Information collected from the sensor network will help track flood reduction and water quality improvement benefits before and after BMP implementation.”

A fairly extensive range of monitoring, sampling, and testing for water quality takes place connected to the program.

“The second half of 2016 and the most of 2017 we conducted water quality tests,” details Rathbun. “The tests where comprised of the following: Field tests/measurements, water temperature (oC), dissolved oxygen, turbidity, pH, transparency, flow of stream at three locations (these locations were selected to coincide with Iowa Flood Center stream stage sensor locations that measure stream levels); laboratory tests, E.coli Bacteria, Nitrate + Nitrite as N, ortho-phosphate as P, total phosphorus as P. There was a Water Quality Summary for 2016 and one will be compiled for 2017. The funding for this water monitoring was exhausted in 2017 and this information will be used in the Watershed Management Plan.”

There is even real-time monitoring in place.

“IIHR—Hydroscience Engineering has water quality sensors deployed in Clear Creek (Clear Creek is located in the East Central portion of Iowa, about 30 miles south of Cedar Rapids), and they will continue to collect real-time data at least until the IWA project ends in 2021,” adds Rathbun.

Participating landowners get the benefit of the program runners’ experience and insight into flood management—and water quality. The program also offers support to participants.

“We have held two landowner meetings to get the word out that we are beginning the implementation phase,” Rathbun remarks. “Word of mouth is promoting the project around as well, and we have fielded many calls and have about a dozen applications with more coming in. Interested landowners can reach me [details below]. We will then look at where their land is located, what they would like to do, and then proceed if the land is in the watershed and is in the eligible area. Most of the watershed is eligible; there are two areas that are not. Landowners can visit our interactive map to see if they are in those areas.” Some landowners may monitor the water quality or soil near them, but the project doesn’t keep data on those activities; those decisions are up to the landowner and are completely voluntary. Rathbun mentions the University of Iowa citizen science project which is using smartphone app to monitor nitrate.

“I know that at least one farmer/landowner is a part of this and a total of 10 folks are participating in testing water in the Clear Creek Watershed,” Rathbun states.

For other real-time information, the IWA is deploying hydrologic stations.

“In addition, the Iowa Flood Center has deployed two hydrologic stations in the Clear Creek Watershed,” explains Rathbun. “These stations measure soil moisture and temperature, windspeed and direction, precipitation, and are co-located with a shallow groundwater well. One station is hosted by a landowner in Iowa County and the other station is deployed at Kent Park (a Johnson County Conservation park). Real-time data collected by the stations can be accessed on the Iowa Flood Information System (IFIS). A total of 20 new hydrologic stations are being deployed through the IWA, which is an expansion of the IFCs current sensor network.”

As the project unfolds, we can expect to see more exciting gains in flood resilience—and in water quality.

“This is a very exciting project to be involved with,” remarks Rathbun. “There is a tremendous partnership structure. Landowners have expressed excitement to be involved in the project, not just to have a pond or other practice built, but to be a part of the project.”