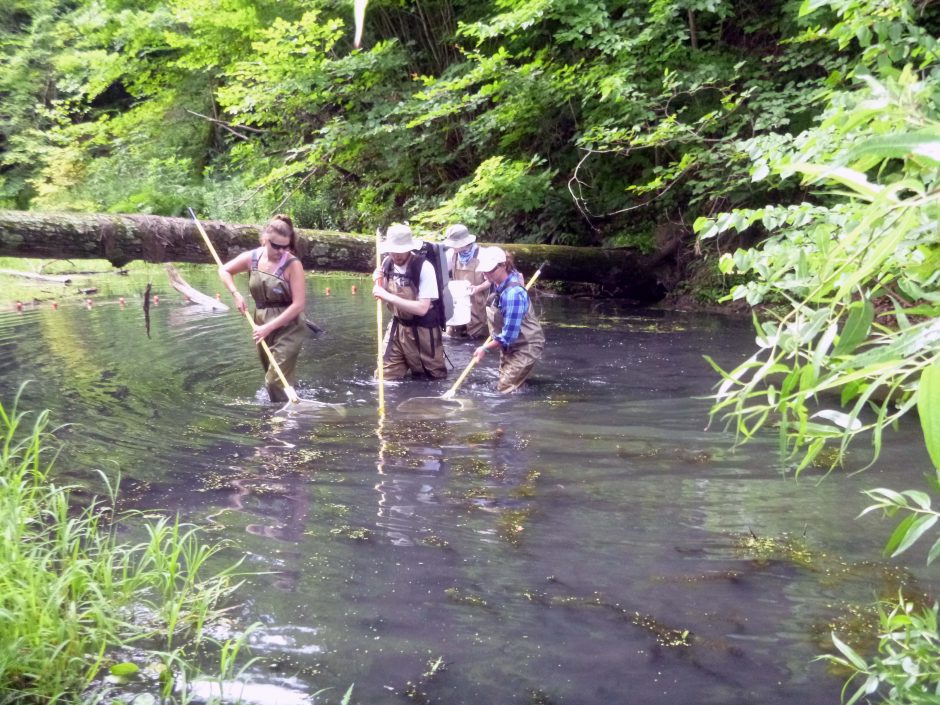 While ecological researchers are naturally curious about the impacts of various forces on creatures living in stream ecosystems, they don’t necessarily want to disturb those ecosystems in order to find out the effects of various outside factors, such as anthropogenic influences. In those cases, sometimes the best thing to do is restore damaged systems. “Davey Tree did the mechanical construction of our restored stream at James H. Barrow Field Station,” says Jennifer Clark, Associate Professor of Biology at Hiram College in Ohio, and also Director of Academic Programs at the J. H. Barrow Field Station, a member of the Organization of Biological Field Stations (OBFS). “We purchased the land through grant funding and identified what project might be best to help improve ecosystem health.”

Clark has been teaching and doing research at Hiram since 2012. “The stream restoration project is only a few years old. Before we acquired the land that now has our restored stream, it was heavily logged. The field station director at the time determined that stream restoration was something that would help improve the land on the property,” Clark explains.

The town of Garrettsville, below the acquired property, experiences flooding problems due to land changes from logging and agriculture in the watershed, as well as a dam in the town. “In order to mitigate that problem, the goal was to reconnect Eagle Creek through the area to the floodplain. They also felt that over time we would start getting a return of canopy cover and an improvement in the animal life we saw,” Clark adds. 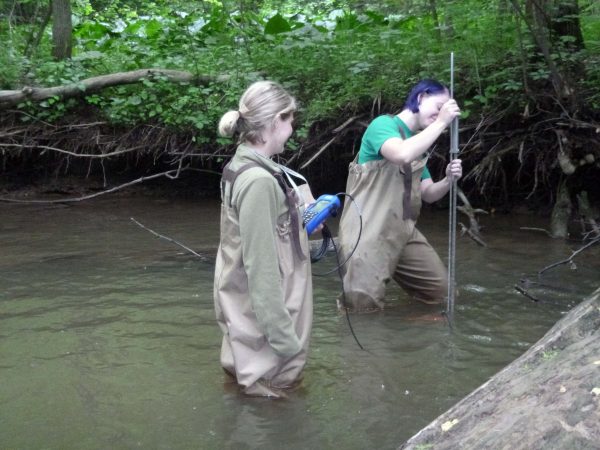 Their approach was to use modified natural channel design, or re-meandering, to correct the flooding. A new channel was dug out, parallel to the main channel, to reflect a more meandering stream. The old main channel was blocked with sediment and now exists as a wetland. “When a stream has good meandering, energy is dissipated, and the water flow slows down,” explains Clark. “The overall effect is less flooding downstream.”

After arriving at Hiram, Clark lost no time collecting aquatic data. “I had some time to collect data before we diverted the stream in 2013,” she recalls. “One of the things we want to keep an eye on is how physical parameters change.” Canopy cover, stream substrate and stream depth were some factors of interest in the study of stream-environment physical parameter differences. “The re-meandered channel has a shallower water depth, sandy substrate and clay, along with no canopy cover,” says Clark. 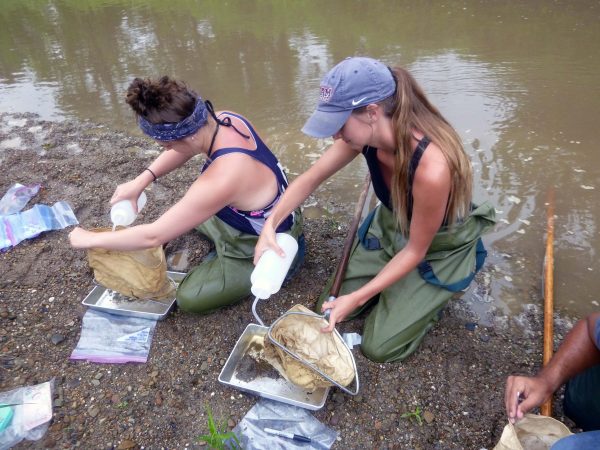 Following the creation of the new channel, Clark and her colleagues observed in the downstream monitoring that there was a loss of sensitive fish. There was also an increase in tolerant fish. Common species, such as the creek chub, have had a good recovery. However, an overall decrease in adult fish occurred as well as a higher percentage of juveniles. The upstream control did not change during the same period. “Again, these data were taken after only 1-3 years,” Clark emphasizes. “The literature suggests that recovery of fish populations in an altered stream can take as much as 15 to 20 years.” On the other hand, macroinvertebrates have had a good recovery after only a year.

In addition to all the Eagle Creek re-meandering research projects, Clark has been involved in research on controlled burn land management and its effects on butterfly populations. “There are many types of butterflies we are monitoring,” says Clark. “Pearl crescents, monarchs, tiger swallowtails and cabbage whites are some of the typical ones we look for.”

Snakes are also monitored and include garter, red-bellied, eastern milk and brown. Cover boards have been placed at the field station for them to colonize under, with research being conducted as to whether plywood vs. metal cover boards works best.

Other research going on at Hiram includes an ornithologist studying bird populations at the field station, who is teaming up with computer science students to develop devices for tracking bird movements. There are also studies on animal breeding, air quality and climate change using drones. 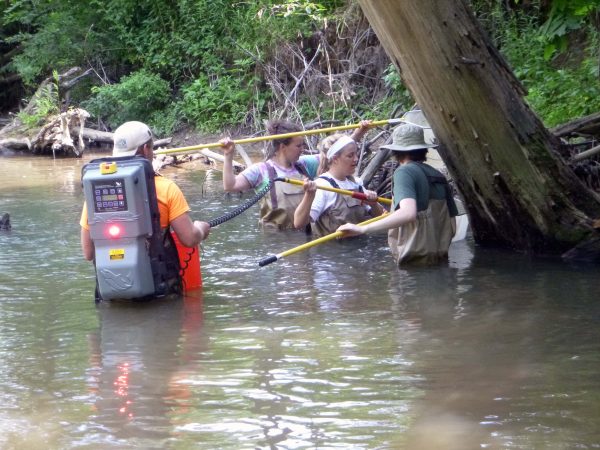 Clark and other faculty teach undergraduate classes on aquatic biology, wildlife management, and entomology, and students, staff and faculty lead a variety of community outreach programs. Students and staff care for white-winged wood ducks coordinated with the Akron Zoo and rehabilitate songbirds, raptors, and waterfowl partnering with Penitentiary Glen and the Medina Raptor Center.

In the future, some research Clark and/or other faculty hope to conduct at J. H. Barrow includes predator/prey relationships in restored streams, including crayfish and fish, and observed high survivorship of lots of juveniles. The Eagle Creek reconstruction will continue to be monitored, as well as the oxbow wetland at the field station. “Few restoration sites have been monitored over time,” says Clark. “Goals are not commonly assessed. It’s research that’s sorely needed, so we hope to fill some knowledge gaps.”

While Clark has been heavily involved in biological research at Hiram, she primarily views herself as a teacher. “The majority of what I do is teach students biology, especially undergraduates,” she says. “It’s very rewarding to me to teach students how to collect biological data and do research.” There are about 30 students working at the field station, many of whom are doing paid internships. While many of the students are studying biology and environmental studies, other majors participate as well, including computer science, art and nursing majors. “We are proud of how interdisciplinary and student-run our projects are here,” says Clark. “The students take on a lot of responsibility and have a real feeling of ownership. I think that’s something we have at Hiram that’s really special.”

Other students involved in this research that are not pictured:  Zachary Nemec, Michael Zielinski, Maci Nelson, Sara Piccolomini, Cory Zaller-Edmonds, Erica Dulka, Aaron Acus-Souders.  This is just a handful of those that helped with this study but these students and those in the pictures spent substantial time during their internships contributing to the stream restoration monitoring project.