Kansas State classes get a lesson in environmental remediation 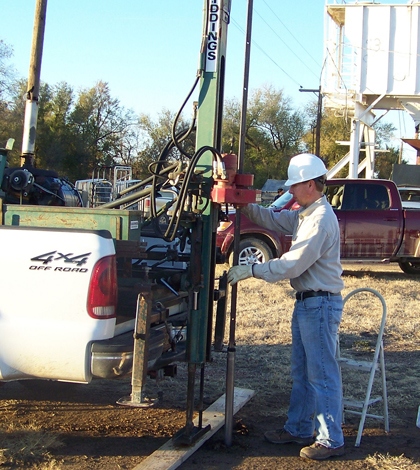 Kansas State University professors transformed a plot of land from a problem to a classroom, teaching students on the fly to remediate nutrient pollution.

It started when Chris Steincamp, an environmental lawyer and KSU alumnus, asked Datta if his geology students could restore a tract of land in Sylvan Grove Kan.

Datta jumped at the opportunity to give his students hands-on experience in a process usually reserved for regulators and consultants.

It helped that O.C. Eke, a KSU graduate student in geology, was researching isotope ratios to determine the sources of nonpoint source nitrate pollution in the Konza Prairie. “That actually triggered that we can actually do the work,” said Datta.

They ran the idea by the Kansas Department of Health and Environment, promising to go through all the required regulatory processes.

The state department’s response was simple. They agreed to the idea, but said “you can’t cut the students any breaks,” Nelson said.

If they were going to tackle the project, they had to follow KDHE protocols. “We basically treated the students like they would be a team of consultants on this site and they would go through all the processes the consultants had to go through,” Nelson said.

Datta’s geology students examined the land and plotted where they wanted to drill sampling wells. Nelson’s natural resource students created a strategy for soil sample collection and analysis. They submitted a proposal to the state, which was approved after a few rounds of revisions.

The students collected soil cores and contracted drillers to dig groundwater sampling wells based on land gradient and likely groundwater flow. They sampled wells for pH, salinity, dissolved oxygen and temperature with a water quality sonde. Nitrates and ammonia concentrations were tested in the labs at KSU. Students submitted half of their samples to an independent lab in Salina, Kan., to verify their data.  Findings were consistent between labs.

Next, the team collected water for isotope samples. Datta said samples were difficult to obtain as they require minimal contact with air. “The (sampling) bottles had to be dipped inside the wells and they had to cap them immediately,” he said.

Analysis of nitrogen-15 isotopes, which are often used in fertilizers, helped the team estimate sources.  Testing revealed adjacent cattle feedlots and fertilizers stored on site were both contributing to pollution.

Once all the groundwater data were collected, Nelson’s team of students started analyzing soil quality to formulate a cleanup plan.

They found high concentrations of nitrate in the upper levels of soil that decreased with depth.  Nitrate was found as deep as 12 feet deep and in concentrations as high as 4,700 parts per million.

The second phase of the process was to pitch the remediation to the state.  Nelson’s students collaboratively pitched four scenarios for cleanup, including a required no-action plan, removal of contaminated soil removal, phytoremediation and a combination of both processes.

Students weighed costs and benefits of each option, including off-site impacts, short- and long-term risks to human health, and benefits to the community.  Following in-depth analysis, they recommended the combination of soil excavation and phytoremediation.

State regulators accepted the recommendation.  Construction crews removed 183 tons of contaminated soil and filled in the plot with clean soil. Native flora including cottonwood trees and several grasses were planted to absorb nutrients and minimize further nitrate seepage into groundwater.

Local farmers used the nitrate-rich soil to as a nutrient source for plants. 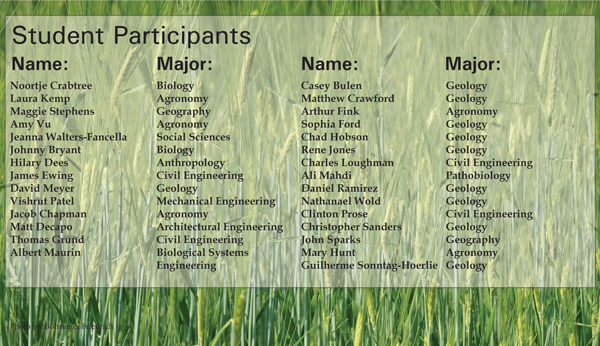 It took three semesters of classes to assess the extent of contamination and develop and implement the remediation plans.  Nelson said it will be several years before the phytoremediation process reaches its full potential.

Future classes will be monitoring groundwater to keep an eye on the nitrate levels and the effectiveness of the phytoremediation.

The experience students had has been invaluable, Datta said. He mentioned that several list the project on their resumes and bring it up with possible employers during interviews.