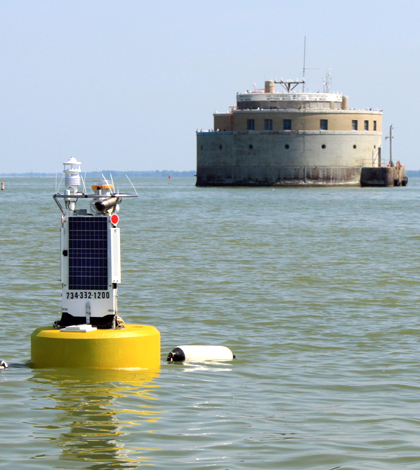 Talk long enough to anyone in the Lake Erie environmental science or policy world and two words will likely come up: “after Toledo,” referring to the summer 2014 water crisis that cut off 500,000 residents from their water supply following a toxic algae bloom.

For Ed Verhamme, project engineer with water research firm LimnoTech, “after Toledo” meant fast-tracking a project to get water quality sensors out to the City of Toledo’s offshore water intake crib. Now when a potentially toxic bloom moves in, the continuous algae data from those sensors give treatment plant operators a few hours warning to ramp up treatment procedures to ensure the water is safe to use.

The data have been useful enough that the state is helping treatment plants around the bloom-prone western basin purchase their own sensors. By summer 2016, data from the treatment plants could be bundled into an online database with algae measurements from university and government monitoring projects, creating an unprecedented Lake Erie harmful algal bloom, or HAB, monitoring network.

“To me it seems simple, but it just hasn’t been done before,” Verhamme said. “There are so many individuals concerned about HABs, but how do you really get them coordinated and how do you really start sharing all this data?”

The first step will be to get everyone producing the data in the first place. Verhamme and LimnoTech will work with treatment plants this summer to get the sensors up and running somewhere along their intake systems that draw water from Lake Erie. They’ll integrate the sensors into the plants’ data management and process control systems. Without sensors like these, treatment plant operators are blind to the quality of the water they’re drawing into their intakes, Verhamme said. With more timely information, they can fine-tune their treatment procedures to keep the water clean while saving money.

For example, Toledo spent $2 million on activated carbon in 2014 to treat algae. With more information they could turn on and off the treatment or change the dosage by knowing what’s happening in the lake.

“One of the real advantages for them is they know they can handle the bad water when it comes in, but they’re really trying to save money on the additional treatment that they have to do,” Verhamme said. They’ll set up a system to pipe the numbers to the data sharing specialists at the Great Lakes Observing System. GLOS Executive Director Kelli Paige said the nonprofit group had its own “after Toledo” experience at its annual meeting in November, where everyone in the room agreed that if more monitoring projects come online as a result of the crisis, the data had to be accessible and usable for anyone that needed it.

“We came away from that meeting with a pretty clear directive that we should be doing more to help coordinate all the data that’s coming out of these various monitoring projects,” Paige said.

GLOS already does some of that work through its online data portal, which lets users access data from real-time monitoring stations across the Great Lakes. They also host archived datasets. The organization recently funded a project to share decades worth of data from Heidelberg University’s nutrient monitoring efforts in Lake Erie tributaries.

When it comes to sharing data from the treatment plants and other sensors around Lake Erie, Paige said it will be a good opportunity to pilot their next big idea: My GLOS. That service will allow users to create accounts and customize easy access to whatever data they’re most interested in, whether it’s related to algae, climate, temperature or beyond.

Verhamme estimates that as many as seven treatment plants along the Ohio lakeshore could come online with algae sensors this summer, from Oregon to Avon Lake in the central basin. They’ll be joining Lake Erie monitoring stations from NOAA’s Great Lakes Environmental Research Laboratory, University of Toledo, Ohio State University and Bowling Green State University.

The University of Toledo’s buoy will be the first operated by their Lake Erie Center, which recently acquired a new boat with the capacity to deploy and maintain the platform. The station will go in Maumee Bay, a shallow, nutrient-rich area where the blooms tend to ramp up, according to Tom Bridgeman, associate professor of environmental sciences at the university. The plan is to locate the buoy around 8 miles from Toledo’s offshore intake, giving them even more warning of an approaching bloom. The sensors at the intake that the city began using last summer give Toledo plant operators a few hours’ notice to tweak their treatment, but the new buoy could give them even more time.

“If high toxin levels are developing in Maumee Bay, then we can give the water treatment plants some advanced warning,” Bridgeman said. They’ll be able to say that “there may not be any toxin right next to your plant, but a couple miles away high toxin levels are developing, and that water could be circulated over to your plant within half a day if the wind and currents change.”

Elsewhere in the lake, a new buoy operated by Bowling Green is planned for Sandusky Bay. NOAA will deploy several continuous monitoring stations in western Lake Erie, contributing to a growing network that will also include Ohio State’s sensors on South Bass Island and a few more stations offshore of Cleveland. It will likely take a year or so before all of the university and treatment plant sensor stations are running together as a cohesive network and all of the data sharing kinks are worked out by GLOS. But once everything is running smoothly, the nascent harmful algal bloom monitoring network could prove to be an important tool in making sure there won’t be another “after Toledo” on Lake Erie.