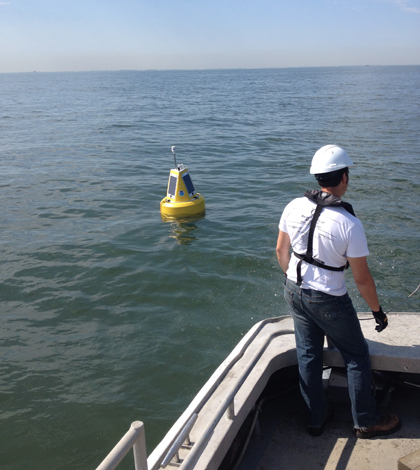 One will test a wind sensor that’s new to the lab. The other will for the first time relay up-to-the-hour measurements of phosphorus levels back to the lab in Ann Arbor, Mich.

The data will give an indication of phosphorous levels influenced by high winds or nearby rivers like the Maumee River — a major source of the nutrient in Lake Erie, said Steve Ruberg, acting supervisor of the lab’s Observing Systems and Advanced Technology Branch.

“This situation permits us in real time to see whether or not we have a wind driven suspension event or an input from the Maumee River, depending on certain conditions,” Ruberg said. “If we see an increase in phosphorus, we can then go out and do event-driven sampling to confirm what that instrument is accurate.”

Phosphorous sensors could be an important tool in Lake Erie, where high loads of the nutrient have helped fuel blooms of potentially toxic blue-green algae that turned vast swaths of the lake pea-green over the past several summers. The lab has used phosphorous sensors on Lake Erie moorings in the past few years, but never as part of a system that delivered real-time data back to computers on shore. The buoy also carries a YSI 6600 multi-parameter water quality sonde, as well as Turner optical sensors that detect a variety of plant pigments. Those measurements will indicate whether algae is blooming and if its a potentially toxic species.

The buoy is moored off shore of Monroe, Mich., near one of the lab’s regular stations for ship-based blue-green algae and phosphorous sampling. That will make it easy to test the instrument’s measurements against the results of sample analysis back in the lab.

“It’s a natural place to put this instrument so we can get some backup indication as to how well the instrument is working,” Ruberg said. “So far they have been working pretty well.”