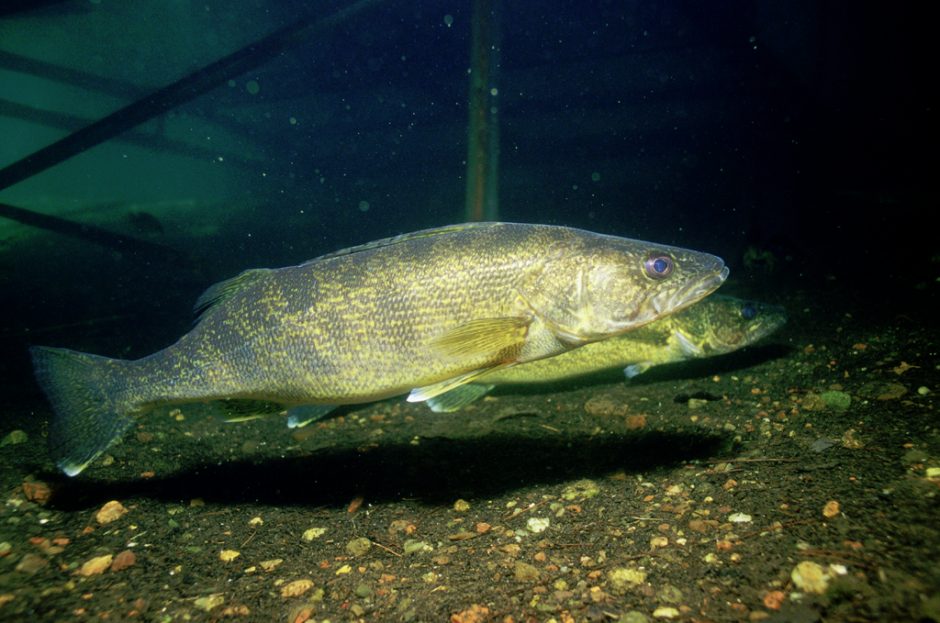 Results of recent research led by scientists at Ohio State University shows how the Lake Erie food web is reacting to cyanobacteria blooms in the western basin. The effort focused on plankton and fish at various sites around the basin.

There were two main parts to the research. One utilized a long-term monitoring data set to judge changes in zooplankton and phytoplankton communities. The other relied on field sampling in the area.

Lead author of the work is Ruth Briland, once a doctoral candidate in the lab of Stuart Ludsin, co-director of the Aquatic Ecology Laboratory at Ohio State. Briland is now with the Ohio Environmental Protection Agency’s Division of Drinking and Ground Waters. She discussed the results of the study during a conference call with Great Lakes reporters meeting at the university’s Stone Lab on Lake Erie’s Gibraltar Island.

For the first component of the work looking at long-term changes to the Lake Erie food web, “we utilized a monitoring dataset through the Ohio Department of Natural Resources (ODNR) and Ohio State (OSU),” said Briland. “Typically ODNR goes out on a boat and collects a sample and back here at OSU we are looking under the microscope and identifying those things.”

The dataset from 1995 to 2013 revealed that there was an increase in plankton biomass, which is something that Briland and others saw coming. If someone were to graph the increase, there would be a pretty clear increase over time, though establishing the speed at which that occurred wasn’t easy.

“Back in the ‘90s, we had very little to almost no cyanobacteria,” said Briland. “Then you had quite a bit in recent years.”

Still, the quality of the biomass wasn’t very high. And a big question remained: How much of all that algae is actually edible for fish?

Briland set out a ratio of inedible algae to edible, again looking at changes over time. They figured out if there has been a decrease in edible species of algae in recent years.

“ … Relative to the rate of cyanobacteria, they just can’t keep up. Cyanobacteria’s increases are so high that they really dominate the communities,” said Briland. “… Some sites may be always higher than other sites from nearshore or offshore effects. It’s difficult to give an overall basin estimate and show that that has changed because if you have sites that have high biomass and low biomass and you average them all, it kind of removes some of that (change) over time.”

Researchers also looked to gauge the impacts of cyanobacteria increases on biodiversity in the western Lake Erie food web. They considered the evenness of cyanobacteria as a variable alongside around 15 of the most common species of fish and plankton.

“When we have samples of microcystis, they have, they really dominate here. And they’re less even, so you could say that they have less biodiversity,” said Briland. “I can’t say that’s changed over time, but knowing that microcystis has increased in recent times, I can still make the argument that the increased cyanobacteria that we have has reduced biodiversity proportionally.” Cyanobacteria blooms on the shore of Catawaba Island, Ohio in Lake Erie circa 2009. (Credit: National Oceanic and Atmospheric Administration)

Spring is a really critical time for young-of-year fish, says Briland. For fish species like yellow perch, white bass and freshwater drum, copepods are a major food source during that time. She and others considered how the nutrients could be affecting abundance of the small crustaceans.

“We typically think of cyanobacteria as decreasing energy transfer to consumers,” said Briland. “… But the hypothesis is … knowing that we have more spring nutrients coming in and then we’ve got more phytoplankton available during this time, it could support more production.”

She points to periods during which young-of-year fish start to prey on benthic communities. Some studies, she notes, have found that there is a decline in zooplankton abundance when they make the switch.

“This could be beneficial to fish recruitment by having more prey during the time period for the young-of-year fishes during June and July,” said Briland. “It’s important for taxa like yellow perch.” Declines in zooplankton, she adds, could be helpful by making young fish seek out higher-value prey.

“It’s interesting how we can have implications for both positive and potentially negative effects on the growth of these young-of-year fishes,” said Briland.

There was also a field component to the work, in which investigators canvassed areas in the western basin of Lake Erie that have the most intense blooms. The aim was to record some of the impacts.

Using a bulletin on Lake Erie harmful algal blooms released by the National Oceanic and Atmospheric Administration, Briland and crew picked numerous sites to sample. The field study was effective, she says, at letting them sample high and low concentrations of cyanobacteria.

“The aquatic harmful algal bloom was as expected (confirmed by sensors) and we saw low water clarity in terms of Secchi depth. We actually found much more zooplankton within these bloom sites, with all of our major groups having a positive correlation with cyanobacteria,” said Briland.

“What we found was that more of the pelagic taxa, emerald shiners and the gizzard shad, were actually concentrated, or we had higher catches of those taxa, at our bloom sites,” said Briland. “And in some cases we didn’t catch any of those taxa at other sites.”

The fish may have been attracted by the zooplankton in the blooms, as there wasn’t a difference in consumption between fish caught outside or inside of the blooms.

“The expectation was that fish inside the bloom would have lower consumption than those outside, due to an inability to find prey,” said Briland. “But they’re feeding on zooplankton, which are more abundant in the bloom.”

The Ohio Department of Natural Resources and the Sport Fish Restoration Program provided funding for the research.