Lake Erie Watersnake: A Look At The Comeback 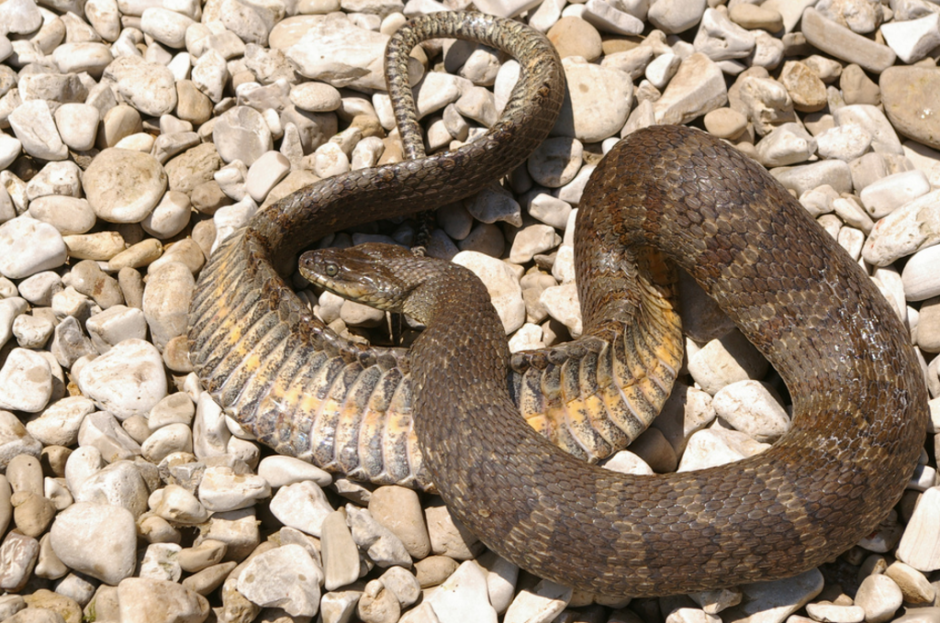 Many people don’t like seeing snakes and arguably few would like petting them. But Kristin Stanford is not one of those people.

As a researcher at Ohio State University’s Stone Lab, Stanford routinely handles Lake Erie watersnakes as part of ongoing work to protect the species. She and others at the Stone Lab played an important role in removing the snake from Ohio’s endangered species list and the federal list of threatened animals.

“A lot of people don’t realize the idea of putting something on the list isn’t to just put them on the list,” said Stanford, recovery plan coordinator for the watersnake. “You actually need to develop what’s called a recovery plan that’s going to talk about the kind of things that need to happen in order to hopefully recover those populations to the point where they no longer need to be federally protected.”

Work began in 2000 on a large-scale telemetry project to learn more about the snake’s life history that wasn’t known at the time. That included tracking how much shoreline habitat the snakes were using and where on the shoreline they hibernated.

The recovery plan was written in 2003, when Stanford’s goal shifted to increase education and outreach efforts to help protect snakes from “human persecution.” The outreach component was in response to a common fear of the snakes, Stanford says. She notes that watersnakes aren’t poisonous and are important to ecosystems in Lake Erie.

Lessons on the Lake Erie watersnake were integrated into camps for Ohio youth – focusing on the next generation – and a conservation easement program was set up through the Ohio Division of Wildlife to give a tax break to property owners who set aside land for snake habitat.

“Within a very short period of time, we actually were able to achieve all of those recovery goals by 2010,” said Stanford. “We were able to propose the water snake to be removed from the list of threatened and endangered animals. In September 2011, we actually did achieve the delisting.”

The Lake Erie watersnake became the 23rd species to be removed from the federal list, which Stanford and others at Stone Lab are proud of. She notes that many scientists don’t get to work on a protection project and get to see an animal removed.

“Usually it’s a lifetime of work before you get to see something like that happen,” Stanford said.

Pushing for habitat protection and management as well as enhancing education and outreach was a key component for the recovery plan. Since the Lake Erie watersnake has been federally delisted, efforts have shifted to post-delisting monitoring to maintain the snake’s gains.

All the monitoring has led to a large data set, which Stanford has contributed to for around 14 years. The data housed at Stone Lab goes back more than 30 years.

“It’s one of the most robust data sets for any snake in the world,” said Stanford. “We can do interesting population biology science with it and it allows us to help snake biologists and herpetologists understand the life history of these animals.”