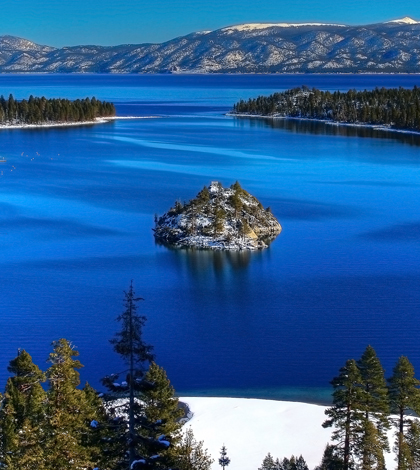 In 2015, Lake Tahoe went through a flurry of extreme changes, according to an annual report released by the Tahoe Environmental Research Center. Those include record changes in temperature, as well as shifts in mixing and the types of precipitation the lake receives.

In the recently released Tahoe: State of the Lake Report, scientists at the University of California, Davis, detail how natural forces, human actions and long-term change have impacted the water body over 2015. Notable effects have been registered on the lake’s average temperature and clarity.

The average surface temperature for Lake Tahoe was 53.3 degrees Fahrenheit, the warmest on record. Not only that, but the pace of its warming has quickened, surging from an average increase of just 0.018 degrees each year to 0.3 degrees Fahrenheit in the last four years alone. That is 15 times faster.

“The occurrence of rising air temperatures at Lake Tahoe has been known about for many years now, and with it the warming of the lake,” said Geoff Schladow, director of the Tahoe Environmental Research Center. “What is different this year is that we are seeing more aspects of the lake’s internal physics changing, and that is bound to alter the ecology.”

Like dynamics of the lake’s mixing, which has certainly changed. Lake Tahoe failed to mix at its full depth for the fourth year in a row, setting up conditions ideal for low oxygen at deep levels.

The lack of mixing also led to the highest average nitrate levels ever recorded in the lake, 20.6 micrograms per liter. This marked a recent shift from the relatively constant nitrate concentrations that have persisted for much of the 35-year record.

Despite the higher nitrate levels, Lake Tahoe registered record-low levels of attached algae around the lake’s margins. Researchers believe that is due to a lower lake level, which dropped by 9 inches in 2015. Lake Tahoe was below the natural rim for all but one day in 2015, so no water could flow into the Truckee River, the sole outlet for the lake.

The lake’s average annual clarity also went down 4.8 feet to 73.1 feet. The measurement marks the depth at which a 10-inch Secchi disk remains visible when lowered into the water. The average is lower than the previous year but still not as cloudy as in 1997, when Lake Tahoe’s clarity was just 64.1 feet. In 2013, its clarity averaged 70.1 feet.

The biggest culprit for the clarity loss appears to be a shift in the type of dominant precipitation that the lake received in 2015 — there was less snowfall. Only 6.5 percent of the precipitation that fell came down as snow, investigators found, the lowest amount ever recorded. Warmer inflowing water also contributed to the decline.

Lake Tahoe is the largest alpine lake in North America. Every year, the report released by the Tahoe Environmental Research Center informs the public about some of the most important factors affecting its health. The big one for 2015 was a rise in temperatures that came as somewhat of a surprise to scientists.

“That is a huge amount of water,” said Schladlow to the Reno Gazette – Journal, referring to Lake Tahoe’s depth that reaches more than 1,600 feet. All that water spread out is enough to cover all of California 15 inches deep. “It takes a lot of energy to raise that a half degree.”