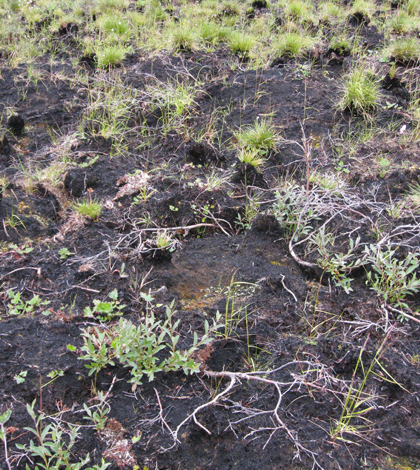 In 2007, near the Anaktuvuk River in Alaska’s North Slope region, a large and severe wildfire seared approximately 1,000 square kilometers of tundra. According to Benjamin Jones, a research geographer with the U.S. Geological Survey, the area surrounding the Anaktuvuk River is classified as arctic tundra, with vegetation like mosses, grasses, sedges and small shrubs — but no trees. The fire burned the vegetation and debris along with an insulating layer of organic matter that was incorporated into the top 30 centimeters of soil.

In a new study published in Nature Scientific Reports, Jones measured how the land surface changed between 2009 and 2014 as a result of this fire. He looked at one type of thaw-related landscape change in particular: thermokarst, which occurs when the land surface slumps because ice below the ground melts away.

The project began, unknowingly, in 2009 when the Alaska Department of Transportation used an airplane-mounted LiDAR system to survey the area for a newly proposed road. Later, when Jones and his team were in the area doing other work, they decided to rescan a portion of the original area in 2014 to see what had changed. Jones said, “Acquisition and availability of those two airborne LiDAR datasets were, in my mind, essential for detecting the changes that occurred in the aftermath of that large arctic tundra fire.” When Jones and his team examined the Digital Terrain Models (DTMs) that they created from the two LiDAR datasets, they found that 34 percent of burned land compared with less than 1 percent of unburned land showed subsidence linked to thawing permafrost. Also, they found that the temperature at 1 meter below the surface of burned soil increased after the fire and was still re-equilibrating in 2014. Jones explained by saying, “The loss of that protective layer more or less resulted in top-down permafrost thaw for several years following the fire.”

In addition to burn severity, Jones found that thermokarst development may also be influenced by the amount and distribution of near-surface ice in the soil. Yedoma is a type of permafrost soil that has an especially high ice content, and Jones found that 50 percent of the total subsidence by volume occurred in yedoma despite the fact that it only made up 30 percent of the total burned land area. Yedoma also experienced the largest increase in rugosity, or landscape roughness at 340 percent.

In contrast, rocky uplands made up 11 percent of the total burned land area and contained only 14 percent of the total subsidence by volume. They also only experienced a 210 percent increase in rugosity — less than in yedoma. According to the paper, the difference may be attributed to the fact that yedoma permafrost soils contain a lot of ice that runs deep and is exposed to the elements, while the ice in rocky upland soil is shallow and protected by an overlying layer of sediment. In addition, the rugosity in all burned portions of the study area more than doubled while unburned areas remained more or less the same, indicating fire’s role in the change. Using LiDAR instead of traditional remote sensing as well as having two overlapping LiDAR datasets for the same fire scar were two important features of this study. The reason why LiDAR was chosen over traditional remote sensing to measure subsidence is because LiDAR measures the time light takes to bounce off of an object below and return to the sensor. In contrast, traditional remote sensing technologies measure how much light enters a sensor, and from that a computer renders an image with areas of lighter and darker shades of gray. Knowing how long the light took to travel from the ground to the plane allowed Jones to calculate how far the land had sunk between 2009 and 2014.

Another finding that emerged from this study was that not all of the effects from a tundra fire will be seen immediately. Shallow landslides called active layer detachment slides and larger landslides called retrogressive thaw slumps were apparent early on, did not spread much, and stabilized within five years after the fire. The same cannot be said for melting ice wedges, which went undetected until 2012 and cover large areas.

Adrian Rocha, an ecosystem ecologist at the University of Notre Dame who was not involved with the study had this to say about the study and the long-term effects of wildfires. “I think one of the [important] points [in the study] was that you have to have a long-term perspective. You can’t just look at what happened right after the fire because a lot of those thermokarsting events actually are the result of the accumulation of events that have happened within the past one to three years.” The Anaktuvuk River Fire was huge — the largest tundra fire in recorded history, and it may be part of a trend toward increasingly severe tundra fires. According to Rocha, “You can see on the North Slope there has been a gradual increase in the importance of fire.” Jones explains why there are still many unknowns when it comes to wildfires on the tundra compared to those in boreal forests. “Partly it could be [because] it’s a little more accessible in that region, but also [because] fires in boreal forests are a much larger disturbance mechanism relative to arctic tundra — at least over the last say 50 or 60 years of record-keeping.”

Although those unknowns will take some time to uncover, obtaining an accurate measurement of the post-fire subsidence appears to have been an important early step toward understanding those mechanisms. According to Rocha, “It was one of the few papers where you could actually quantify how much subsidence there was and what the spatial extent of it was.” Now that scientists have a description of the problem, the next step is to figure out how it all happened.