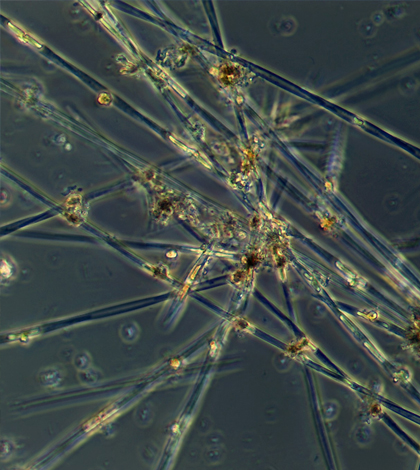 High concentrations of the toxic algae Pseudo-nitzschia have prompted officials in Washington to shut down shellfish fisheries. (Credit: Anthony Odell/University of Washington)

A massive algae bloom is shutting down fisheries on the west coast and drawing the attention of researchers who say it could be the biggest one seen in the past decade.

One researcher from University of Washington set out to study the bloom up close on a four-part voyage that will last through mid-September, taking him from San Diego up to Vancouver Island.

UW research analyst Anthony Odell went aboard the National Oceanic and Atmospheric Administration’s research vessel Bell M. Shimada to determine the span of the bloom, and whether it contains any swirling eddies that could boost its growth.

So far, the bloom is known to stretch from central California to Vancouver Island, but sightings have been reported as far north as Alaska. The bloom’s presence has shut down every razor clam beach in Washington, along with the state’s southern Dungeness crab fisheries.

The bloom may be the largest seen in a decade, but it could also exhibit some of the highest concentrations of domoic acid, a toxin, ever seen in the region, according to a NOAA press release.

“We’re taking advantage of our active surveys to focus research on a serious concern for coastal communities and the seafood industry,” said NOAA Fisheries Assistant Administrator Eileen Sobeck in the release. “The better we understand what’s happening out on the water, the better we can address the impacts.” Small, localized blooms of toxic marine algae called Psuedo-nitzschia have been a common sight along the west coast during springtime for more than 25 years, and larger events have been known to force fishery closures. Most of those algae events have only lasted for several weeks to a month, so when bigger, badder blooms seem to stick around, scientists begin asking questions.

Researchers from the University of California, Santa Cruz, lead a multi-institutional monitoring project in Monterey Bay and throughout southern California that regularly gathers water and shellfish samples for the purpose of informing the state’s Department of Public Health and other organizations about potential health hazards.

Both UC Santa Cruz and the University of Southern California have deployed robotic samplers to assist in the project, collecting data from the blooms at depths up to 200 meters.

While more research is needed to determine whether a connection exists, some scientists suggest that an unusually warm patch of water in the region — known as the “warm blob” — could be fueling the large algae bloom.

Heat, nutrients and proper currents are vital to the toxin-producing algae that make up the bloom, and a combination of “the blob,” agricultural runoff and unseasonable warmth could provide the perfect backdrop for algae growth.

For now, the bloom is giving researchers a run for their money. Vera Trainer, a NOAA researcher and UW affiliate professor, told the Seattle Times: “Our goal is to try to put this story together once we have data from the cruises.”