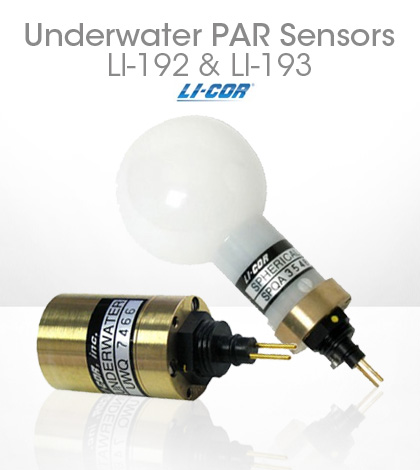 Understanding how the sun’s rays fuel phytoplankton or plant growth may prove valuable to understanding an aquatic ecosystem.

A pair of sensors from LI-COR can help researchers studying algal blooms and aquatic vegetation by measuring how much light enters underwater environments.

Sitting below the surface, the LI-192 flat-lensed photosynthetically active radiation sensor and the LI-193 spherical PAR sensor measure light waves striking their silicon photovoltaic detectors.  They sense light wavelengths between 400 and 700 nanometers, which is the ideal range for photosynthesis.

Dave Johnson, a LI-COR product manager for the LI-190 series, said the sensors’ individual designs make them ideal for different applications.  “The LI-193, with its spherical acrylic diffuser, is designed to measure photosynthetically active radiation received from all directions,” he said. “The LI-192, with its flat acrylic diffuser, measures PAR received on a plane surface from all angles of a single hemisphere,” he said.

The sensors’ lenses dictate how they sense light waves passing through the water.  Users looking for sensors to work in applications focused on just direct sunlight may benefit more from the LI-192.

The LI-193 measures photon flux fluence rate, which accounts for light radiance in all directions around the sensor’s spherical lens.

“Depending on which way it is pointed, the LI-192 is used to measure the total direct and diffused downwelling or upwelling light on or within a body of water,” said Johnson. “The LI-193 is used for measuring light coming from all directions. This is important when studying phytoplankton and similar aquatic organisms, which utilize radiation from all directions for photosynthesis.”

The sensors were designed for underwater applications, but they can also be deployed in air with a programming change.  LI-COR ships the sensors with a readings multiplier that accounts for light refraction as it passes through water.

LI-COR engineers designed the sensors to account for different properties of light waves based on their physical characteristics.

The LI-193 sensor’s spherical design incorporates a similar principle. However, instead of diffusing light in just one plane, the sphere diffuses light from all directions.

Both sensors also account for azimuth, or the compass bearing in relation to the Earth’s horizontal plane. Azimuth measurements enable the sensors to take accurate readings regardless of their orientation in the water.

LI-COR engineers made sure to build both sensors tough for field applications in freshwater and saltwater.  Both are made from corrosion-resistant brass and withstand high pressure  depths.  The LI-192 can be submersed to a maximum depth of 560 meters and the LI-193 can be submersed to 350 meters.

The sensors require a LI-COR UWB cable, which can be connectorized to interface with data loggers, such as the NexSens Submersible Data Logger.

The light sensors also remain stable during deployment, drifting at most two percent during a year of light measurement.