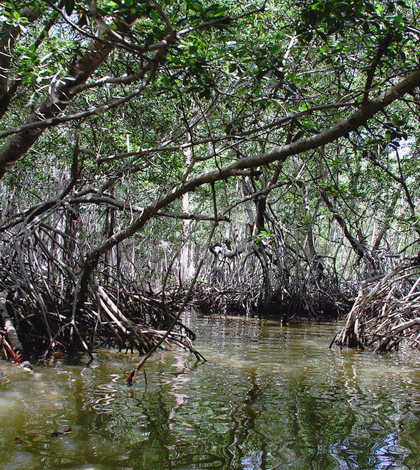 The polar ice sheets adorning Greenland and Antarctica are melting — at a faster rate than expected, according to some scientists — and all that water has to go somewhere.

Sea level rise is increasingly being recognized as a legitimate, existential threat to small island nations and coastal regions, and while political leaders representing affected areas often struggle to be heard amid a conversation dominated by world superpowers, troubling predictions of a meters-high swell by the end of the century are pushing the topic out of academia and into the mainstream media.

A new study conducted by scientists in Australia, New Zealand and the UK suggests that mangroves, a natural feature of tropical estuary ecosystems, could mitigate the impact of sea level rise in some of the world’s most threatened regions. A paper detailing the results of the study is published online in Proceedings of the Royal Society A.

Easily recognizable for its exposed tangle of thick roots, the mangrove is an iconic tree that grows in at least 118 countries and territories around the world, mostly residing in tropical and subtropical estuaries between the fifth-degree northern and southern latitudes.

“These ecosystems play a very important role in the fashioning of the coastal systems, especially in New Zealand but also in Australia and elsewhere,” said Barend van Maanen, research fellow at University of Southampton and lead author on the study. Mangrove forests grow in over 118 countries and territories, mostly in tropical and subtropical estuaries between the fifth-degree northern and southern latitudes. (Credit: Doug Beckers/CC BY-SA 2.0)

Using data on mangrove growth and aerial photographs of New Zealand tidal networks, van Maanen and his coauthors developed a model to show how estuaries and deltas will respond to rising sea levels. They found that as rivers flow out to sea, currents carve deeper into their channels and transport sediment up onto river and estuary banks. As water levels rise, the sediment stacks up higher and higher.

“That sediment creates more and more habitat for the mangrove trees,” van Maanen said. In turn, the cage-like roots of the mangroves help stabilize the soil, slow down tidal currents and reduce the impact of waves, making conditions suitable for more sediment to build up along the banks. But, van Maanen noted, where mangroves obstruct tidal flow, they actually strengthen flows in nearby areas devoid of the trees.

The complex nature of the interactions between biological and physical processes made the data particularly difficult to model.

“You’ve always got surprising aspects when you start a model,” van Maanen said. “You expect that they will influence the system, but you’re not exactly sure how they are doing that.”

And while the researchers know plenty about these systems, just a handful of unknowns point to a need for improved data.

“We know quite well how the tidal flow is behaving. We know how tidal currents can transport sand and mud, how the morphology evolves,” van Maanen said. “But to build in the effects of mangroves [into the model], we actually don’t know to what degree the mangroves impact those processes.” The researchers plan to continue finding new data sources to improve the model, and may also examine different types of mangrove ecosystems.

Mangrove forests are sounding like great news for many of the coastal regions where they grow. But even in areas threatened by rising seas, these trees aren’t always well-received. Van Maanen said that mangroves can take over sandy tourist beaches and block waterways, frustrating boaters. By slowing tidal flow, they can also make channels muddier.

“Mangroves have changed the ways that estuaries look,” van Maanen said. But given their ability to mitigate damage from sea level rise — and other research suggesting that mangroves make useful carbon sinks — he’s willing to take some aesthetic loss in exchange for a lot of natural utility.