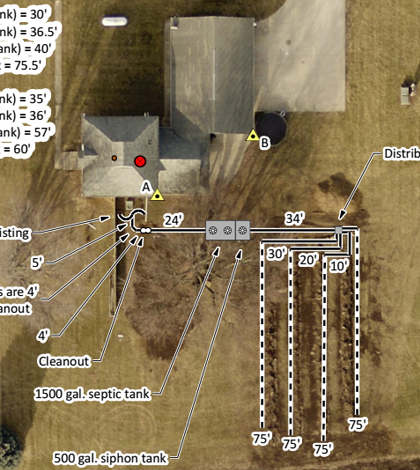 Homeowners that don’t have the ability to connect to a municipal sewer system typically use some other form of wastewater treatment system on site. Placing such systems isn’t the easiest thing to do and has been the source of many a headache for installers and inspectors.

In the past, the placements of these systems were drawn out using pencil, paper and stencils. As is pretty clear, those methods aren’t the most accurate way to do it.

Officials with the Linn County Public Health Department in Iowa realized the waste in time and resources that was going toward those outdated efforts and have streamlined their operations by using GPS receiver technology for quicker and more accurate placements.

“Now, with the integration of technology, we use an aerial photo of the property and then overlay the drawing of the on-site system into a GIS-based software,” said Chase Moffitt, environmental health specialist with the health department. “This gives the customer, installer, and the public a very accurate picture of the system.”

GPS receivers, including a Geneq SX Blue II, are used mainly for mapping the on-site treatment systems, also known as septic tanks. These are typically inspected for residential systems, Moffitt says, but there have also been occasions where larger treatment schemes have been charted. Private water wells would be one of those, for example.

The mapping is much more in depth than plotting where tanks are. It covers all the aspects of a wastewater treatment system from the tank to lids, drainage lines and effluent discharge. “We use the Geneq SX Blue II receiver to collect individual data points of the on-site system. This becomes important after the installation of the system,” said Moffitt. “On-site wastewater treatment systems can last several decades if properly maintained, and finding the components that many years later can be a challenge. Also, since we live in Iowa, weather can provide some challenges in locating these systems as well.”

By using this tool, Moffitt says that visitors can turn on and off layers to show different metrics.

“One of the best examples that we use frequently is the aerial photo where you can see the trenches of the system and then see the drawing where the points have been added,” said Moffitt. “That is a great visual of how accurate these things can be.”

Beyond the online tool and its records, the health department doesn’t need to track the GPS data the receivers collect. But its inspectors have been pleased with the increased accuracy and efficiency that the devices have provided.

“We have found that the process has been expedited due to the ease of the system. We also believe that the drawings and measurements are more accurate than before we purchased the (GPS) units,” said Moffitt. “The results were not surprising at all, mostly because we knew the potential of utilizing GPS but just didn’t know how to get there or where to start.”