Monitoring for Biodiversity with 1st Commercial eDNA Service in the UK 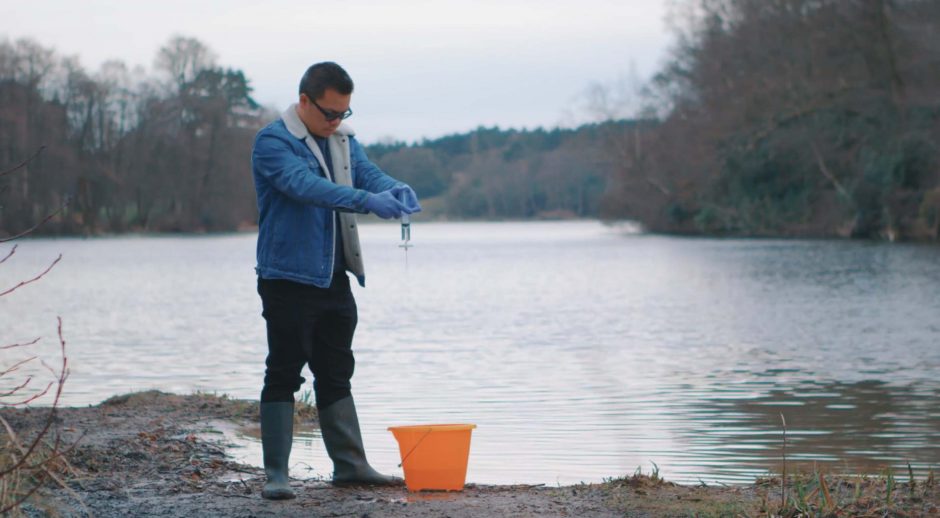 Using the kit’s syringe to catch eDNA in the filter for analysis. (Credit: Screenshot, from NatureMetrics video, https://www.youtube.com/watch?v=cUmbPH6-oSk&t=14s.)

Surveying waterways for defining habitats and ranges may soon be much quicker and easier thanks to the applied use of environmental DNA (eDNA). Traditional studies have relied upon the slow, difficult, and somewhat haphazard process of catching fauna in the field using any number of techniques. This is even more difficult than usual when the target of the study is an endangered animal.

A new company NatureMetrics, which spun-out from the University of East Anglia (UEA), is taking on this challenge with its eDNA tech.

“We were founded to work on developing high-throughput ways of measuring biodiversity, and environmental DNA is one element of that,” Dr. Kat Bruce, the director of NatureMetrics, remarks to EM.

The innovative NatureMetrics eDNA system helps scientists monitor fish by identifying entire communities of them. The all-in-one eDNA test allows users to amplify and sequence any eDNA in a water sample, and determine which animals have been in the area very recently.

“We’ve applied it to samples collected from ponds, lakes, streams, rivers, estuaries, coasts and open oceans, from the equator to the North Pole, and it works for all fish,” adds Dr. Bruce.

The power of the process lies in its ability to detect marine fauna without disturbing them—something critically important for many species that avoid humans.

“Using conventional approaches generally involves trapping or stunning the fish, and some species are very good at evading such tools,” explains Dr. Bruce. “eDNA is very effective for monitoring species that routinely escape nets, or which are at low population levels, or are difficult to identify visually. It also detects species that may be more active at night than during the day, making them difficult to survey conventionally. In a recent piece of work that we carried out with AquaBiota in Sweden, we found that a single day of eDNA sampling effort detected more fish diversity than electrofishing efforts over many years.” 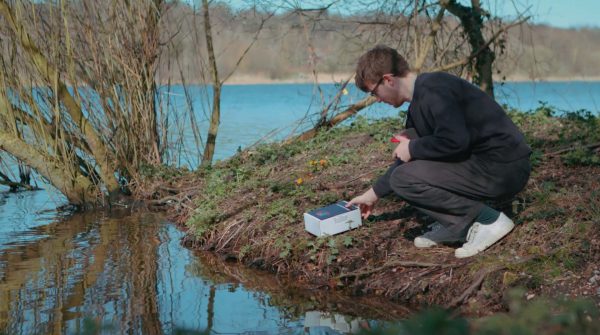 The kit can be deployed almost anywhere. (Credit: Screenshot, from NatureMetrics video, https://www.youtube.com/watch?v=cUmbPH6-oSk&t=14s.)

The test could allow scientists to more accurately assess the impact of barriers such as hydropower plants, on various species and their migration paths, including threatened and endangered ones.

“With migratory fish, the key question is whether they are able to travel upstream and to navigate past any barriers,” clarifies Dr. Bruce. “Hydropower plants tend to create significant barriers, the impact of which ought to be mitigated by the provision of fish ladders and such, but these are not always successful or fit-for-purpose. eDNA sampled upstream of hydropower installations can provide strong evidence of a species having successfully navigated the barriers, or conversely it might highlight a potential problem if a fish is detected downstream but not upstream.”

Scientists can also use the eDNA kit to monitor invasive species, which can threaten native populations and damage ecosystems.

“eDNA has already been used to help with the eradication of the invasive Top-mouth Gudgeon in the UK, led by the Environment Agency and CEFAS, the Centre for Environment, Fisheries, and Aquaculture Science,” remarks Dr. Bruce. “In that case, the sensitivity of eDNA was used to detect cases when eradication from a water body had not been successful. If just a very small number of fish are left then these may be very difficult to catch but will be detected by eDNA. While it’s not possible to prove a negative, the information provided by eDNA is extremely useful here for monitoring after an eradication attempt.” 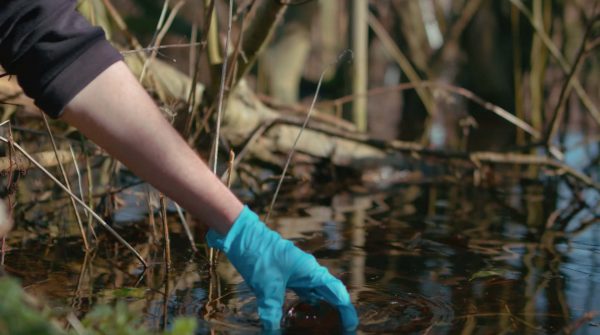 The kit instructs users on how to collect samples. (Credit: Screenshot, from NatureMetrics video, https://www.youtube.com/watch?v=cUmbPH6-oSk&t=14s.)

The eDNA system can solve an additional challenge: it can detect how far into a watershed an invasive species has traveled, allowing teams to target control measures more effectively.

“For invasive river fish, the challenge is often to know exactly how far up a particular river system an invasive species has reached so that control measures can be implemented in the most effective locations,” comments Dr. Bruce. “eDNA has been used very effectively for monitoring the invasion front of Asian Carp in the US, showing that the fish had already reached much further up the rivers than previously thought.”

In the case of the Asian Carp, although electrobarriers designed to stop the fish from entering the Great Lakes were in place, specimens were found by monitoring teams beyond the barriers, which had been placed too low.

In both eradication cases of Top-mouth Gudgeon and Asian Carp, a species-specific eDNA test was used, meaning that scientists screened the samples for the DNA of the target species.

“Using the eDNA metabarcoding approach that we favor, we can monitor whole communities of fish and implement much broader surveillance,” adds Dr. Bruce. “This allows us to detect the presence of invasive species that we may not have known we needed to look out for.”

DNA in an underwater environment

The eDNA technique is both less invasive and less costly than traditional monitoring methods and usually allows users to detect more species. It is reliable because although all creatures are continuously sloughing off DNA in the water, for it to register on the test they must have been in the vicinity very recently. 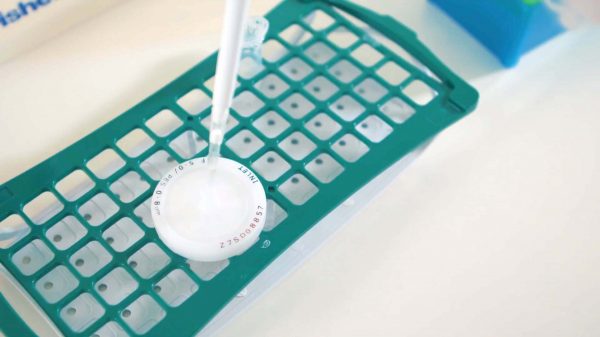 “DNA is broken down by chemicals, UV light, bacteria and other things once it’s released from the organism,” Dr. Bruce describes. “While the exact length of time that it takes for the DNA to become undetectable is affected by many environmental factors (chemical and biological properties of the water body; substrate type, flow rate, environmental conditions etc), it is usually in the region of 24 hours to one week. This is really useful for us because it means that we can detect things that might have been more active at a different time of day than when we are sampling, but that anything we do detect will have been present very recently, so we are not picking up a historical signal.”

And although the test cannot be used to predict numbers of fish in an area in a definitive, quantitative way, it easily reveals which species are dominant in a particular area.

“Even though you can’t be totally quantitative about the analysis (different fish give off different amounts of DNA and this varies seasonally), it’s easy to tell which species are the dominant ones and which ones are only present at lower levels,” remarks Dr. Bruce.

Many conservation organizations and consultancies simply don’t have the resources to obtain data on fish biodiversity; they are only for use by experts, or too costly, or demand specialized training and big teams. However, this eDNA kit will allow them to collect data that they perhaps would never have gotten any other way.

This testing relies upon a database and population genetics, just like human DNA testing does. The more complete the reference database is, the more accurate the tool becomes.

“To be able to make a species-level identification, the species needs to be in the reference database,” remarks Dr. Bruce. “This is much more complete for freshwater than for marine species, so sometimes it’s only possible to identify marine species to genus, or to make an assumption of species ID based on known distributions. All the commercially important species are well represented in the databases, though.”

Into the future with eDNA

Moving forward, NatureMetrics plans to work with organizations from various sectors to tease out the true diversity of waterways in the UK. 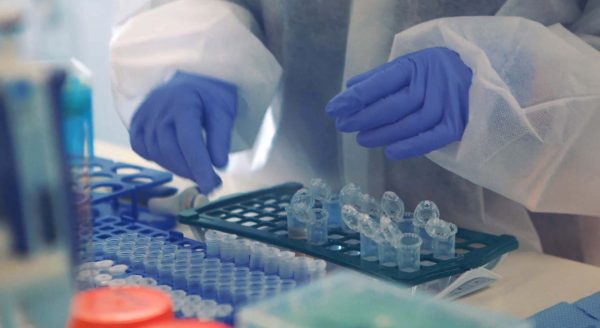 Analyzing the eDNA samples back at NatureMetrics. (Credit: Screenshot, from NatureMetrics video, https://www.youtube.com/watch?v=cUmbPH6-oSk&t=14s.)

“We’d love to do this; we even want to start working on citizen science projects so that everyone (including schools) can help contribute to getting a better understanding of UK aquatic diversity,” confirms Dr. Bruce. “We’re keen to work with industry, NGOs, and policymakers as well.”

There are many different applications the researchers foresee for this tech—for government agencies, businesses, and conservation groups.

“Hopefully quite soon the use of eDNA metabarcoding will be integrated into the European Water Framework Directive for water quality monitoring,” states Dr. Bruce. “Fish communities are a key indicator of water quality, and the Environment Agency in the UK is actively working to establish a new index based on eDNA data for fish, which can be used to assess water quality in lakes.”

Over the past two years, the company has been refining the testing process. The team has used them to monitor fish in lakes, oceans, and rivers. In one case, the team found eDNA from 25 species of fish in just 300 mL of Devonshire coast water. In another instance, the team detected a narwhal in an Arctic Ocean water sample.
“You quite often get interesting incidental detections of birds and mammals even when targeting fish,” states Dr. Bruce. “We’ve found several species of deer, foxes, long-tailed tits, great crested grebes, beavers, moose, voles—and even a narwhal. Routine use will give a great picture of the local wildlife as these records build up over time.”

Top image: Using the kit’s syringe to catch eDNA in the filter for analysis. (Credit: Screenshot, from NatureMetrics video, https://www.youtube.com/watch?v=cUmbPH6-oSk&t=14s.)