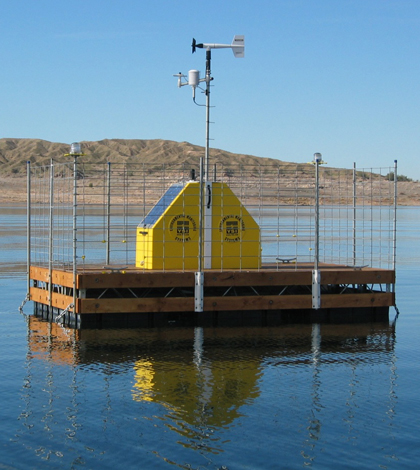 Lake Mead has seen its share of hard times while serving up drinking water for Las Vegas, but scientists from federal agencies now closely monitor the lake to make sure water quality isn’t a gamble.

Data collected show the lake is in relatively good health, especially compared to 2001 when a massive algal bloom turned the lake green.

Still, Lake Mead has some looming problems like the trillions of quagga mussels covering most hard surfaces in the lake.

Then there are the predictions that the lake may run dry by 2021.

The problem has enough to potential to inspire a ticker on the Las Vegas Sun website counting down the days until Lake Mead goes dry.

A dry Lake Mead worries scientists like Michael Rosen, a U.S. Geological Survey water quality specialist who works on the lake. “Lake Mead, on an average year, will drop 12 feet,” he said.  “The hope is that the (water) managers will manipulate water in such a way that they will be able to compensate for the low years by moving water different places.”

Veley said observed temperature profiles show that the man made lake acts like a natural lake in some respects. “I think one of the observations that jumped out at us was that the lake actually turns over at a higher frequency than previously thought,” he said. A winch controlled by a data logger lowers sensors to profile the lake (Credit: USGS)

One of the 7-by-11-foot platforms is operating on the lake. It is deployed near Sentinel Island.

Veley said his team decided on custom platforms over monitoring buoys or off-the-shelf solutions due to high waves seen in the lake. “We initially thought it was safer,” Veley said.

He said Lake Mead’s waves can reach up to eight feet tall on rough days.  That makes for a tricky transfer from boat to platform for scientists, though the researchers generally stay off the lake on rough days.

He uses two types of passive samplers to track contaminants in the lake. A semipermeable membrane device detects hydrophobic contaminants commonly found in fish fat. The sampler, invented by the USGS, has lipids inside and pollutants bind to them.

The advantage of a passive sampler over catching and examining fish is much more consistent results.

Rosen said fish can travel throughout the lake and metabolize contaminants differently making it difficult to quantify contaminants.  With the samplers, “you can compare between sites a lot more easily,” said Rosen.

Some of the most prolific chemicals Rosen said he detects are fragrances from detergents and soap. The antibacterial chemical Triclosan is also prevalent in the lake. Rosen said DDT from waste piles at decommissioned plants near the lake also leaches into Lake Mead. Nevada’s desert climate makes keeping the lake clean a challenge. Droughts can change the ecosystem quickly. “It also lowers the quality of water because there will be less dilution,” Rosen said.

Scientists from the National Parks Service,Bureau of Reclamation, U.S. Fish and Wildlife Service, Southern Nevada Water Authority and USGS work together to monitor and maintain the quality of the lake.

Lake Mead serves 22 million users in the Southwest. Lucky for them, water quality monitoring in the lake means opening the tap isn’t a roll of the dice.

For those interested in what else federal scientists have been doing on the lake, a USGS circular on Lakes Mead and Mojave was released in January. It details water quality data, historical improvements and problems still facing the arid lakes.