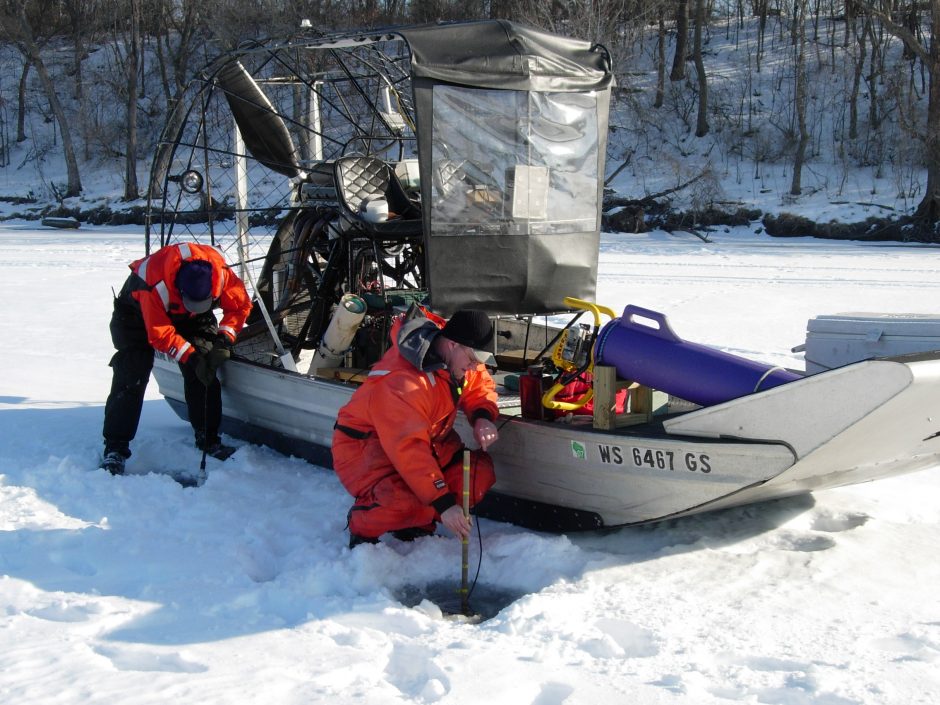 The Upper Mississippi stretches from headwaters at Lake Itasca, Minnesota, all the way to Cairo, Illinois, about 1,250 miles. It includes picturesque wilderness areas complete with waterfalls, limestone bluffs and expansive valleys. It has attracted many campers, hikers, fishing enthusiasts and people seeking to launch their favorite boats or canoes. It has also been a haven for environmental researchers.

Since 2016, Jeff Houser is the Science Director for the Long Term Resource Monitoring element (LTRM) of the Upper Mississippi River Restoration Program (UMRR).  Previously, he led the LTRM water quality component from 2003 until 2016. Analogous to other systems such as National Estuarine Research Reserves (NERRs) that have protocols in place called System Wide Monitoring Programs (SWMP), the environmental monitoring on the Upper Mississippi was designed specifically to meet the needs of the partnership that comprises the UMRR.

LTRM monitors a suite of physical, chemical and biological components of the Upper Mississippi and Illinois Rivers within three components: water quality, aquatic vegetation, and fisheries.  These components have been monitored since 1993 in five study reaches of the Upper Mississippi River and one study reach of the Illinois River (see Map). The water quality component collects in-situ data as well as samples for lab analysis.  The in situ data is collected using a Hydrolab MiniSonde– a Hach instrument which measures oxygen concentration, temperature and pH. Water quality is monitored to assess habitat condition and includes data on total phosphorus and nitrogen, pH, conductivity and silica. Silica is important to the Upper Mississippi because silica supports phytoplankton, especially diatoms. Secchi disks are also used to monitor water clarity.  All of the data is publicly available on the LTRM website at https://www.umesc.usgs.gov/ltrmp.html .

Water quality data are monitored using a stratified random sampling design that spans the different kinds of aquatic areas in the river and its floodplain including main and side channels, impounded areas, and backwaters.  There are approximately 150 randomly selected sites sampled in each of the six study reaches each season. These sites are sampled during two weeks every quarter. Surface grab samples are collected for lab analyses, and in situ sonde readings are taken at a depth of 0.2 meters. For a small number of fixed sites, primarily in the main channel and in major tributaries, data are collected every two weeks during growing season. No sampling is performed in December or February.

In a separate, collaborative project with the National Great Rivers Research and Education Center, full-sized EXO2 sondes are used as part of a set of continuous monitoring stations that monitor temperature, Dissolved oxygen, chlorophyll, phycocyanins, conductivity and turbidity. Fisheries monitoring in the Upper Mississippi by LTRM is designed to assess the total fish community, rather than tracking a few rare species. Monitoring is done with a combination of electrofishing and catches in hoop/fyke nets. There are about 126 species found in the Upper Mississippi. A few of them are: bluegill, largemouth bass, walleye, redhorse, mooneye and catfish.

Vegetation monitoring by LTRM is concerned with the distribution and community composition of vegetation in the Upper Mississippi.  Vegetation is an important part of the river ecosystem. It provides physical habitat, food for fish and waterfowl, and contributes to nutrient cycling.  The Upper Mississippi is a critical migration corridor for waterfowl. An important aquatic plant for some waterfowl during migration is wild celery (Vallisneria Americana) which produces a tuber that fuels nearly 60% of the eastern population of canvasback ducks as they move through the corridor during seasonal migration.

Monitoring of the Upper Mississippi River through the UMRR LTRM involves many people and multiple agencies. The U.S. Army Corps of Engineers manages the UMRR program to address the river’s ecological needs.   The UMRR program became the first federal program to combine ecosystem restoration with scientific monitoring and research on a large river ecosystem. The LTRM element is implemented by the U.S. Geological Survey’s Upper Midwest Environmental Sciences Center (UMESC), in cooperation with the five Upper Mississippi River System (UMRS) states of Illinois, Iowa, Minnesota, Missouri and Wisconsin.

There have been many changes in the Upper Mississippi over the years. “In the late 1980s, vegetation declined, and there was lots of suspended material in the water, impacting water quality. By the late 2000s, vegetation abundance had increased and water clarity had improved.  These changes coincided with small declines in tributary input of suspended material, several years of low river discharge, and several management and restoration actions in the river,” says Houser. Another change that has happened over the past few years was the arrival of the Asian Carp, an invasive species that has appeared in the lower part of the Upper Mississippi River. Filter-feeding silver and bighead carp have become abundant in some areas, and make up from 35 to 70 percent of the fish biomass in some parts of the Upper Mississippi and Illinois rivers.  Because they are large, and jump out of the water when boats pass, fishermen have been struck and injured while boating on the river.

Generally, however, the condition of the Upper Mississippi River has improved since the 1980s. “It’s a special place here,” says Houser. “Over 250 miles of the Upper Mississippi river are part of a USFWS National Wildlife and Fish Refuge. Much of the upper river is still connected to its floodplain.  It is a great place for people looking for great canoeing, fishing or hunting experiences.”

Houser also notes that it’s interesting the whole area functions well despite the fact that the watershed changes around it.

“We’ve been doing long term monitoring of the Upper Mississippi for 25 years,” says Houser. “Resource managers and the public can look at our data online where we provide the raw data, summaries and analyses, and detailed descriptions of our methods. Our results have increased our understanding of river and have provided decision makers and resource managers with the information needed to maintain the Upper Mississippi River System as a sustainable multiple-use river ecosystem. Before UMRR – LTRM was established, there was a paucity of information about the river and its health. Thanks to the partnership among the USACE, USGS, the U.S. Fish and Wildlife Service, EPA, USDA and the five Upper Mississippi River states, we have been able to change all that. Today we have a good sense of the pulse of the river.”

Equipment disclaimer: Any use of trade, product, or firm names is  for descriptive purposes only and does not imply endorsement by the U.S. Government.