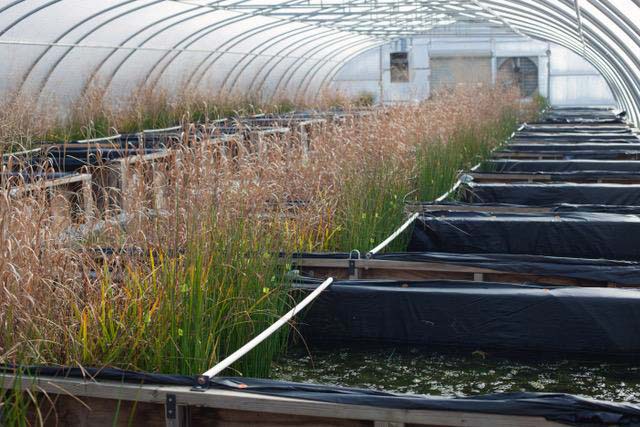 Over the past decade or so, nanomaterials have been deployed in agrochemicals such as pesticides and fungicides more and more. In theory, this is a brilliant strategy, reducing the number of toxins fields of crops—and agricultural producers and workers—are exposed to, and enabling increased crop yield and more disease protection.

However, recent work from the Center for the Environmental Implications of NanoTechnologies (CEINT or the Center) reveals nanomaterials and nutrient pollution combine to worsen eutrophication in water—and that a holistic, experimental approach can yield more accurate results. Duke University postdoctoral associate and Ecosystem Ecologist Marie Simonin explained the research to EM.

Getting the big picture on nanomaterials

“The Center for the Environmental Implications of NanoTechnologies, based at Duke University, has been doing research on the impacts and fate of nanomaterials in the environment for the past 10 years,” explains Dr. Simonin. “In this context, people at the Center have been studying the impacts of these materials at the individual level, at the organism level, and at the ecosystem level.”

To study the impacts nanomaterials have on ecosystems, the CEINT team has been conducting experiments with mesocosms. These small ecosystems are basically like big boxes, each containing a small wetland.

“We did these mesocosm experiments over the course of a year to look at the impacts of nanomaterials over time, in complex natural conditions, to study chronic exposure,” details Dr. Simonin. “Usually people do just one exposure and look at the effects. Here we wanted to do something more realistic and do chronic exposure to different types of nanomaterials including commercial nanopesticides.”

This is the critical difference, and something that’s part of a move to fill a hole in the current literature. Typically, as Dr. Simonin points out, researchers look at the effects of contaminants in a small petri dish, or in small cubes; they also study the effects of one exposure to a single contaminant on one organism.

“Here we looked at chronic exposure to contaminants under normal conditions, such as seasonal change, with about 20 species in a natural setting,” Dr. Simonin describes. “We have different species of plants, and the water contains algae, microorganisms, fungi, sediments, fish, and macroinvertebrates, and so on. We looked at the effects of chronic nano pesticide exposure on all of those different species, and also on the water quality of the system to see if chronic exposure to nanopesticides or gold nanomaterials had any effect on the water quality or on the health of the system.”

Algal blooms are a pressing issue around the globe.

“One of the most common environmental problems, all over the world, is nutrient pollution,” remarks Dr. Simonin. “Nitrogen and phosphorus end up in waterways from agricultural runoff and wastewater treatment plants.” 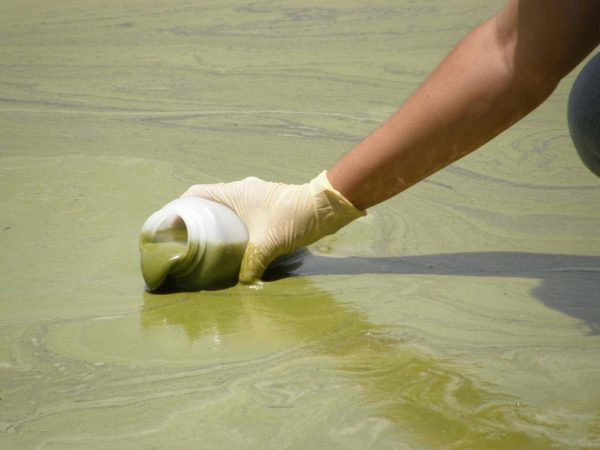 Sampling from an algal bloom. (Credit: by Nara Souza, Florida Fish and Wildlife Commission, from https://today.duke.edu/2018/06/nanomaterials-could-mean-more-algae-outbreaks-wetlands-waterways)

This has a huge impact on water quality, causing eutrophication and the algal blooms that are currently making Floridians so unhappy.

“We wanted to see what happens when eutrophication is combined with a new type of contamination, specifically nanomaterials,” explains Dr. Simonin. “Is it worse? Is it improving the situation? What’s happening?”

“We saw huge effects on the ecosystem that were really negative,” comments Dr. Simonin. “We saw an increase of eutrophication, and an increase in the number of algal blooms, more than when we had just the nutrients alone or just the nanomaterials alone. When you add the two together, this is when you see the big problems happening.”

Setting up a mesocosm

The researchers worked hard to ensure their mesocosms in this study were as complex as possible in order to mirror real-world conditions. The team set up 18 different tanks, each with a 250-liter capacity, and a sloped, sandy bottom. These open-air mesocosms were filled with water, soil, and various wetland flora and fauna.

“The experiment took one year to set up; it took that long to create the wetland, to achieve acclimation of all the organisms, to get the plants to grow,” explains Dr. Simonin. “When it seemed that all of the species were established, we initiated nanomaterial treatments.”

In addition to monitoring the accumulation of nanomaterials, water chemistry, and the growth and metabolism of algae and plants, the team also added another layer of treatment: a nutrient addition. 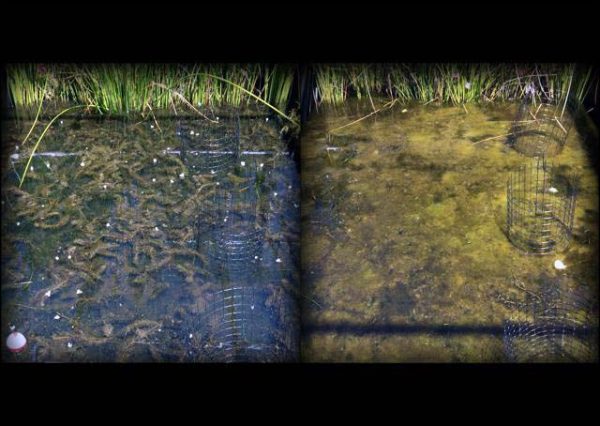 In a simulated wetland experiment at the Center for the Environmental Implications of Nanotechnology, nutrients together with nanoparticles turned clear water (left) murky (right). (Credit: Steven Anderson, Duke University, https://www.eurekalert.org/multimedia/pub/174007.php?from=398197.)

“The idea here was that we usually look at the environmental effects of only one contaminant, but in real life, those nanomaterials are not going to end up in the environment alone,” remarks Dr. Simonin. “Especially if you think about agricultural runoff, you’re going to have pesticides ending up in wetlands, but also fertilizers. So we wanted to see if there were any interaction effects between the nutrients, the fertilizers, and the nanopesticides or gold nanoparticles ending up in these wetlands; we wanted to look at multiple stressors.”

This is particularly important, because according to the researchers, up to 29,200 metric tons of nanomaterials worldwide end up in natural bodies of water. In addition to the numerous other contaminants that are out there, the synergistic effects could be significant.

“It was actually really surprising that when we added nanomaterials with no nutrient addition, almost nothing happened, but when we added the two together, we saw a degradation of water quality,” Dr. Simonin details. “We saw that the eutrophication became worse when we added nanomaterials. We saw that the aquatic plants died; we saw that the algae took over the system—we had more than three times more algal blooms in this situation. We saw a really huge change in the nitrogen and in the phosphorus in the water column, and in general, the water quantity degraded.”

In fact, throughout the duration of the experiment, large algal blooms were at least three times more frequent and more persistent in mesocosms that received both nanomaterials and nutrients, and those blooms reduced dissolved oxygen levels in the water.

We don’t always know when nanomaterials are present in the environment; they could already be making eutrophication worse in many cases.

“That is a key message of the paper, and we think that it’s not only nanomaterials; we think that it’s possible that there are lots of contaminants that are entering waterways and making eutrophication worse,” comments Dr. Simonin. “Right now when we think about eutrophication, we think only about fertilizers and wastewater as the main drivers of the process. We completely ignore the fact that these kinds of nanomaterials, heavy metals, and other contaminants may actually also be drivers of the increase in eutrophication.”

This research demonstrates that nanomaterials and nutrients work together to drive eutrophication, and this is true with both of these two nanomaterials, which are completely different: a gold nanomaterial and a copper nano pesticide. This is why the team believes that what they saw with these nanomaterials could be true for many other contaminants.

“One important takeaway here is that we really need to investigate the effects multiple stressors have on ecosystems at the same time,” adds Dr. Simonin. “We tend to focus on one contaminant at a time, but as this demonstration reveals, if we look at nanoparticles alone, we’ll conclude, ‘oh it’s safe for the environment, there is no problem.’ When you actually add a contaminant that is present in every watershed—nutrients—that’s when we start seeing effects. We need to be very careful when we are designing experiments to include all the different stressors, contaminants, climatic factors that are changing very fast in the environment, factors that could be influencing toxicity in the face of the contaminants, including nanomaterials.”