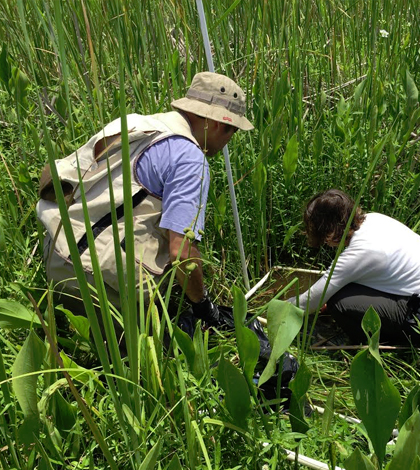 Using sophisticated satellite technology and ground-based field work, NASA scientists have finished a routine surveying effort of wetlands along the Gulf Coast. Surveys of the region are completed several times a year, as scientists with the agency assess how it’s changing over time.

Of interest to scientists are a number of things. One is the Wax Lake Delta in Louisiana, one of the few deltas worldwide that is actually growing through natural sedimentation.

Most deltas are highly engineered, inhabited areas that are in danger from a combination of subsidence and sea level rise, says Jones. That happens because dams upstream and levees in the deltas prevent the natural process of sedimentation from offsetting subsidence. And so it is interesting to watch Wax Lake delta’s growth in contrast with others that aren’t expanding.

Scientists want to dissect the delta’s changes, as well as those involved with subsidence in the Mississippi River delta and the Gulf Coast ecosystem overall. The progression of the Bayou Corne sinkhole, an expanding sinkhole in Louisiana that threatens surrounding property, is also of interest to scientists. The effort relied on a large number of instruments to collect measurements, most of which were mounted to NASA research planes that made flights over the region. They included the Uninhabited Aerial Vehicle Synthetic Aperture Radar (UAVSAR) instrument; the Next-Generation Airborne Visible/Infrared Imaging Spectrometer (AVIRIS-ng); and the Air Surface Water and Ocean Topography (AirSWOT) instrument.

The goal of the research is to provide data to federal and local agencies, which use the information to determine where to concentrate resources and combat the negative effects of wetland loss and floods. The data will also be used to improve modeling of delta land building and can be applied to help restore deltas worldwide.

So far, scientists have yet to draw complete conclusions from the measurements they’ve taken. “We are still analyzing the data, so we don’t have full results yet,” said Jones.